NBA shutdown allowed many in league unexpected time to heal 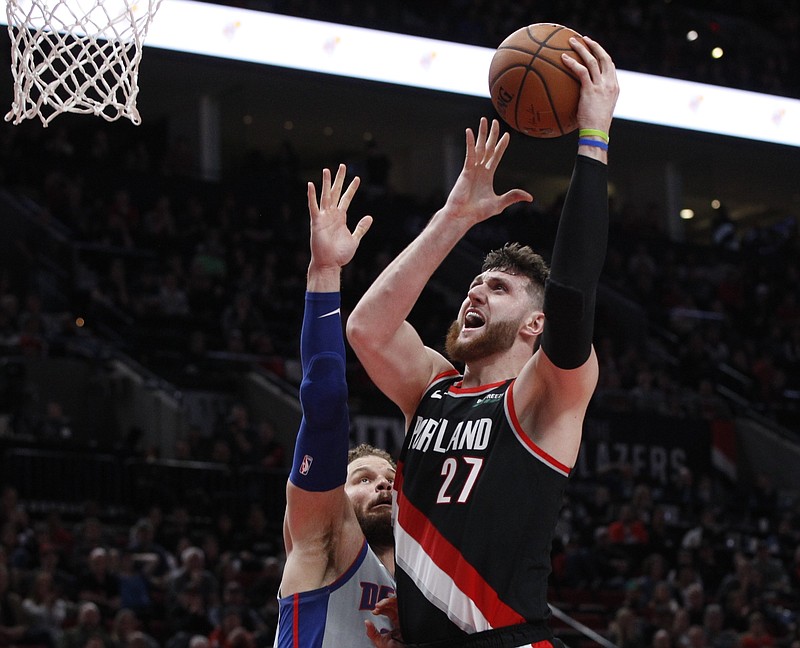 Portland Trail Blazers center Jusuf Nurkic, right, shoots as Detroit Pistons forward Blake Griffin defends during the second half of a March 23, 2019, basketball game in Portland, Ore. Jusuf Nurkic is back and healthy. So are Zach Collins, Meyers Leonard, Giannis Antetokounmpo, Anthony Davis and plenty of others. If the four-month NBA shutdown had a silver lining, it’s that a lot of ailing players got well. - Photo by Steve Dipaola of The Associated Press

Portland guard Damian Lillard was in the gym a few days ago and took notice of what injured Trail Blazers big men Jusuf Nurkic and Zach Collins were doing during their individual workouts.

That's when he realized a bright side of the NBA's coronavirus shutdown.

Plenty of aches and pains around the NBA have healed in the almost-four-month span since the league had to suspend its season because of the pandemic, which means the 22 teams that will be arriving at the Disney campus near Orlando, Florida next week should be coming in with mostly healthy rosters.

Keeping players healthy once they get to Disney will be another challenge, as workloads ramp up quickly for the July 30 resumption of games -- but, at least at the start of camps for the resumed season, rosters will be deeper than they were when the league shut down on March 11.

"I hate to even use that term, like a 'silver lining' came out of this because this is something that nobody ever predicted," Miami coach Erik Spoelstra said. "And it's hard to say good things came from it."

Fact is, though, some good things have emerged on the injury fronts. After 60 or 65 games, most players were likely dealing with some sort of aches-and-pains issue anyway.

Miami's Meyers Leonard was in a race against time just to get back for what would have been the April start of the playoffs after a horrifically bad sprained ankle, and Heat rookie Tyler Herro had been out with another ankle issue. Milwaukee's Giannis Antetokounmpo was dealing with a slight knee sprain when the season was suspended. Dallas' Kristaps Porzingis was getting some occasional maintenance days for his surgically repaired knee.

"The knee was feeling great the whole time. It was just a matter of me getting back into a rhythm, getting that skill for the game again, that touch around the rim and little things like that," Porzingis said. "I feel like now with the extra time that we had to put in the individual work and get a lot of shots up and keep working on my game, I feel really comfortable on the court. I'll be really back into my rhythm and into the feel of the game. I'm just ready. I'm ready to be back on the court."

Collins hadn't played since Oct. 27 because of a left shoulder dislocation that required surgery. Nurkic hasn't played since March 25, 2019 because of a gruesome injury -- fractures to his tibia and fibula in the left leg. And now the Blazers, who will be fighting to make the Western Conference playoffs, will have a pair of 7-footers back at Disney to bolster those postseason hopes.

"They look great," Lillard said of Nurkic and Collins. "They make me feel way more confident going in, both of them. Like I forgot ... I didn't forget, but I forgot who they were. It's been so long that I almost forgot."

Nurkic is looking forward to reminding everyone what he was.

While it's true that players would have preferred to be in rhythm and not have had this much time off, there are plenty who have raved about the benefit of unplanned rest. Boston's Gordon Hayward said he was able to give his left foot -- which still gets sore from time to time, a residual effect of his awful left ankle fracture in 2017 -- a bit of a break, and Los Angeles Lakers forward Anthony Davis said the time off left him feeling completely refreshed.

With games coming about every other day at Disney, that time off now is a valuable commodity.

"It's been good," Davis said. "It's given me a chance to let my body recover, kind of take a midseason break now and just let everything heal and get back to like how I was beginning of the year ... to get back to the best version of myself. I feel 100% healthy. I don't feel -- I am. I'm ready. Ready to go."