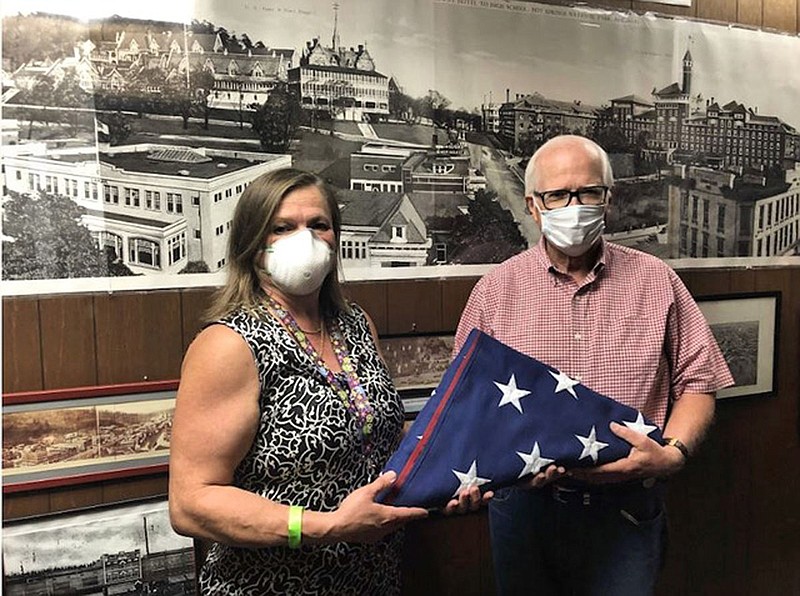 The last American flag to fly over what was once the Army and Navy General Hospital in downtown Hot Springs before Arkansas Career Training Institute finally vacated the facility on June 30 was donated to the Garland County Historical Society's archives a week later.

"We're honored to have it in our collection," GCHS Executive Director Liz Robbins said. "It's a very important part of our history that we can preserve and display and use to educate people and remind people about these important institutions that were a part of our community for so long."

A panoramic view taken in the mid-1940s shows the Army and Navy General Hospital's main building, left, joined by an overpass or skywalk to the Eastman Annex, right. The Army bought the 520-room Eastman Hotel in 1942 to provide for the increased numbers of patients arriving at the hospital during World War II. Photo is courtesy of the Garland County Historical Society. - Submitted photo

Robbins said the institutions on that site have been incredibly important to Hot Springs and Garland County.

"Starting in 1887 with the first Army and Navy General Hospital building, and then in 1933 with the second Army and Navy building and going up to 1960 when the state of Arkansas took over the facility as a rehabilitation unit," she said. "The buildings on that site have served our country and our state and our community for generations and they've helped thousands and thousands of people."

According to a news release, the 12-story structure has been a "flagship building" in downtown Hot Springs for 133 years.

"The idea of a military hospital at Hot Springs began after the Civil War when sick and wounded former soldiers from both Northern and Southern armies poured into the city," the release said.

"Many of these veterans were penniless and were forced to take up residence at the primitive Ral City site, bathing in dugout pools. Local doctors and prominent citizens like Col. Samuel W. Fordyce felt it was the duty of the government to build a hospital in Hot Springs for soldiers and sailors who could be helped by the thermal waters. In 1879, the first proposal for a national hospital in Hot Springs to be administered by medical military officers was introduced in the U.S. House of Representatives, but it wasn't until June 1882 that a law was passed to make this possible.

"Construction began in February 1884 on the first Army and Navy General Hospital, which was built on federal property and completed in 1887. Its 30 acres of scenic grounds and thermal waters helped relieve the infirmities of aging veterans of the Civil War, and then current duty personnel and veterans of the Spanish-American War, the World Wars and the Korean War. The hospital's wooden structure was replaced in 1933 with the current brick building," the release said. 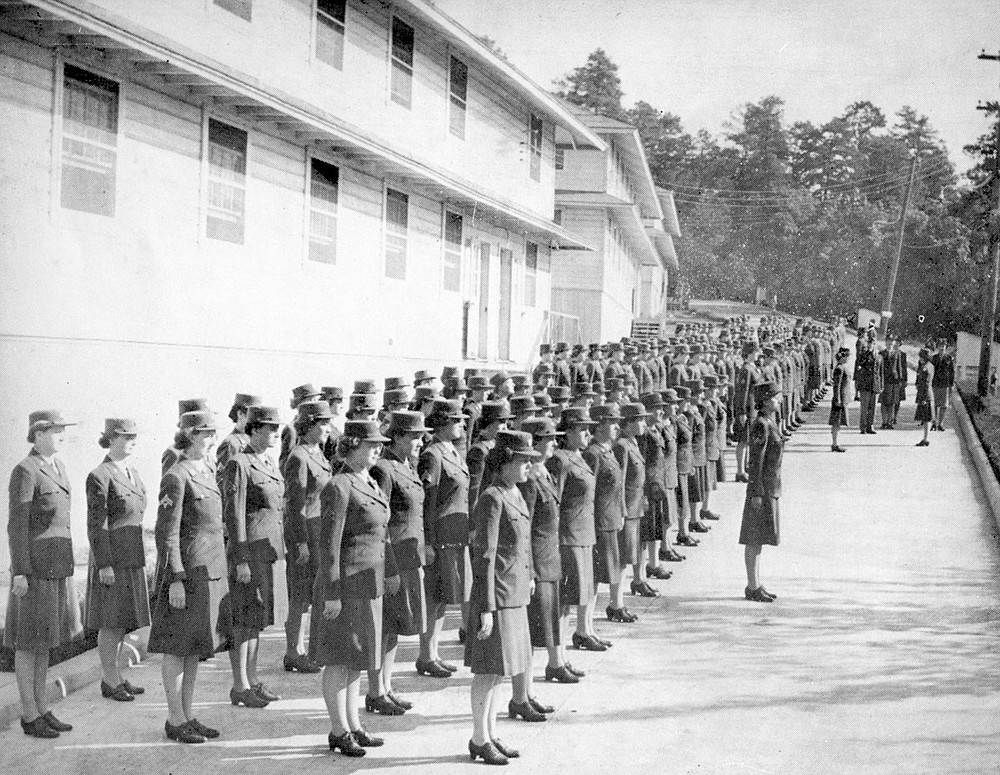 Members of the Women’s Army Corps, or WACs, assemble for inspection at the Army and Navy General Hospital in the summer of 1943. They were attending the first school in the country for women military medical technicians. Although some would serve overseas, they were trained in order to free male soldiers working in stateside hospitals to serve overseas. Photo is courtesy of the Garland County Historical Society. - Submitted photo

In 1942, to care for an increased patient load during World War II, the Army purchased the Eastman Hotel, which was across Reserve Street from the main hospital building, and built a 150-foot overpass to connect the structures, the release said. The wartime high number of patients at the Army and Navy General Hospital was 1,777 in June of 1945, and many of those suffered from conditions that the thermal springs were believed to help.

"Gov. Orval Faubus accepted the deed to the complex on behalf of the State of Arkansas," according to the release. "After a year of renovations, the former military hospital opened on Jan. 3, 1961, under its new name, Hot Springs Rehabilitation Center. The facility later was named the Arkansas Rehabilitation Center. In November 2009, the Arkansas Rehabilitation Center became the Arkansas Career Training Institute, focusing on vocational training, and in 2011, the center closed the medical wing. At that time, the center provided services as a 24-hour residential facility where young adults with disabilities received vocational training in preparation for employment opportunities around the state."

In May 2019, the State of Arkansas announced the property would be returned to the federal government, and permanently closed on June 30, the day the flag was lowered for the final time. 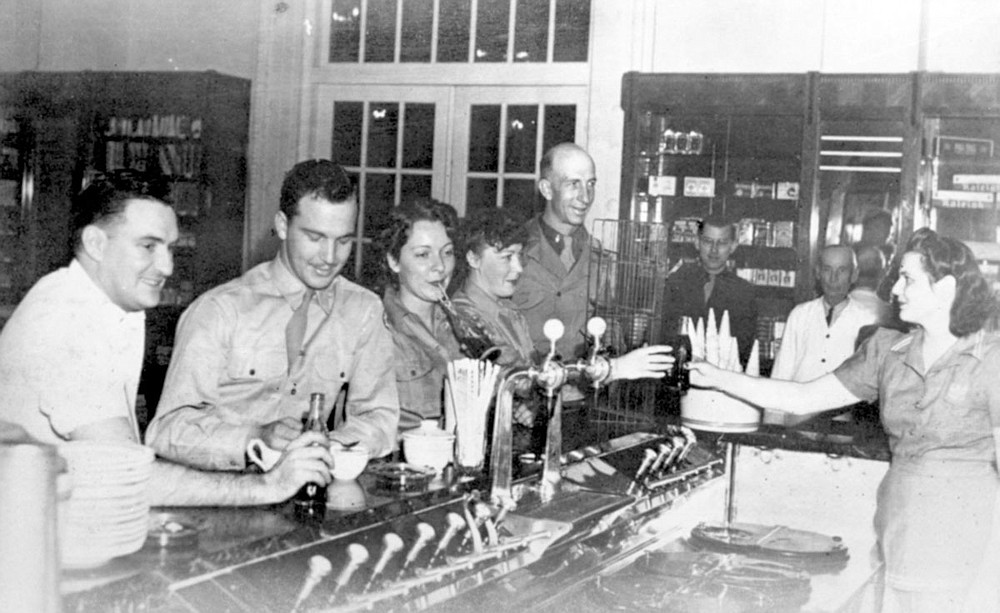 Soldiers enjoy the Enlisted Men’s Exchange in the Eastman Annex of the Army and Navy General Hospital, circa 1944. Photo is courtesy of the Garland County Historical Society. - Submitted photo 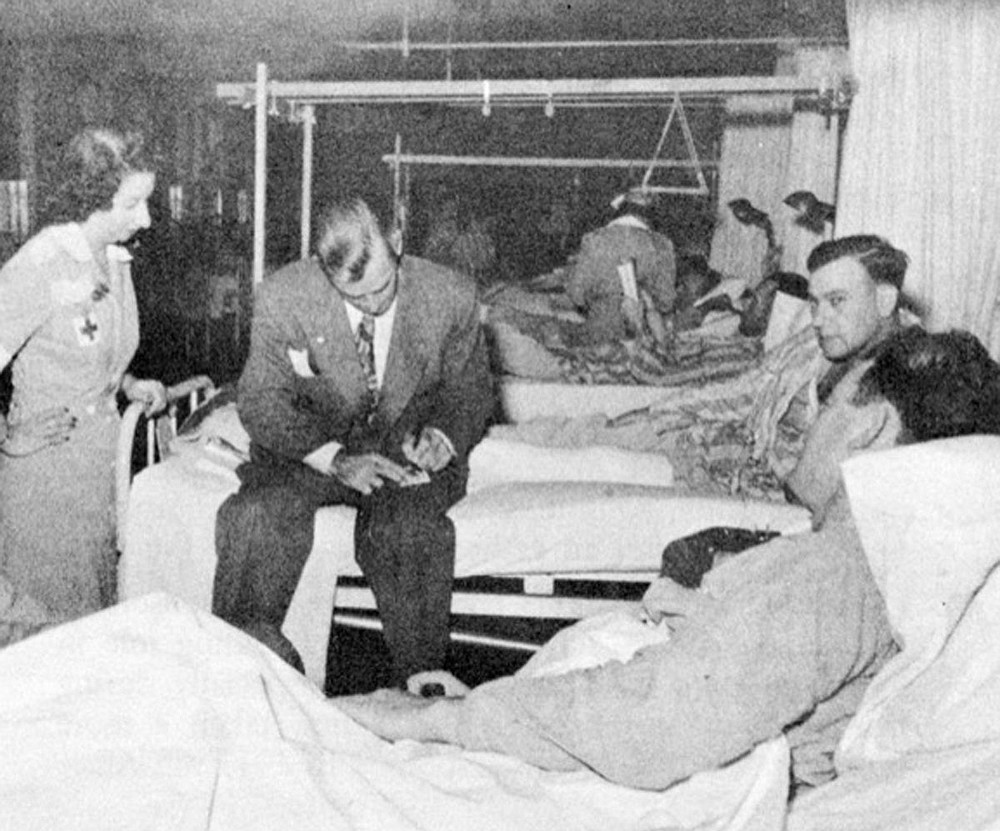