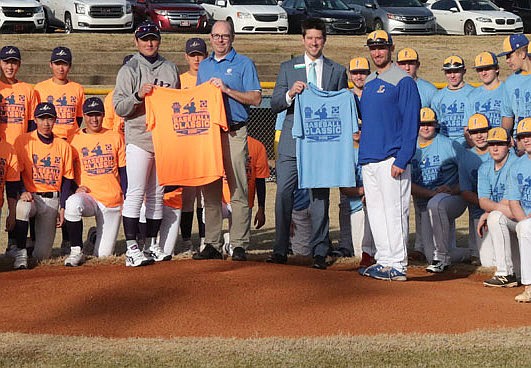 Community representatives join with the Hanamaki Higashi and Lakeside baseball teams in a jersey ceremony at Lakeside in December 2019. - File photo by The Sentinel-Record

For the second time in its history, the Hot Springs Sister City Program has been named the best of its size in the country.

Mary Zunick, the program's executive director, called it "an incredible honor" to win the award, which was announced by Sister City International during its annual conference. She said it is the second time the program has received the award; the first time was in 2012.

The program, which is between Hot Springs and Hanamaki, Japan, won the Sister Cities International 2020 Award for Best Overall Program in America in a city with a population between 25,001 and 50,000. The conference was held July 8 and 9.

Zunick said it was good to bring the award back to Arkansas and that it reflects well on Hot Springs.

"I think Hot Springs fostering this relationship says a lot about our city," she said. "It makes us unique, not like every other small town out there."

Zunick said one thing that probably made the program stand out was the Sister City Baseball Classic played between Hanamaki Higashi High School students and Lakeside students on Dec. 7, 2019.

That date, Zunick said, is "a day many Americans associate with the beginning of a war." Because of this game, she said these young baseball players "will remember it as a day on a baseball field" building friendships.

The program also sent student delegations to Hanamaki, held its annual Cherry Blossom Festival and had a traveling exhibit on Japanese manga come to town.

"Hot Springs demonstrates the breadth of programming that can be done with just one Sister City partnership. Their attention to detail, and focus on their relationship with Hanamaki has laid the foundation for cooperation, mutual respect, and understanding between the two communities," Leroy Allala, president and CEO of Sister City International, said in a news release.

"We congratulate Mary for the fabulous job she does in promoting Hot Springs and our citizens through her hard work for the Sister Cities Program," Elizabeth Farris, chairman of the Hot Springs Advertising and Promotion Commission, said in a news release. "Her efforts bring international attention and goodwill to our city every year. She does a wonderful job."

The conference was originally set to be held in Santa Fe, N.M., but due to the COVID-19 pandemic, it was held virtually on Zoom. As a result, Zunick said they weren't able to accept the award in person.

However, Zunick said holding the conference digitally allowed for more people in sister city programs to participate. "We usually have a few hundred people attend," she said, but this time "more than 1,200 people" took part in it.

Zunick said all of the people now know about Hot Springs and the Hot Springs Sister City Program. She also noted she knew prior to the convention Hot Springs had won.

The program was asked to make a three-minute video detailing their accomplishments in 2019 which was viewed by around 1,200, so "a lot of people learned about Hot Springs," she said.

The release notes each program was judged on:

• Regular exchanges among many or all of their partnerships.

• Breadth and depth of impact.

• Emphasis on youth and giving young people their first opportunity to travel abroad.

• Expansion or improvement of previous activities or programs.

• A commitment to reinforcing the principles of citizen diplomacy and the mission of Sister Cities International: to promote peace through mutual respect, understanding, and cooperation -- one individual, one community at a time.