Fake baseball fans, and the 'roar' of the 'crowd' 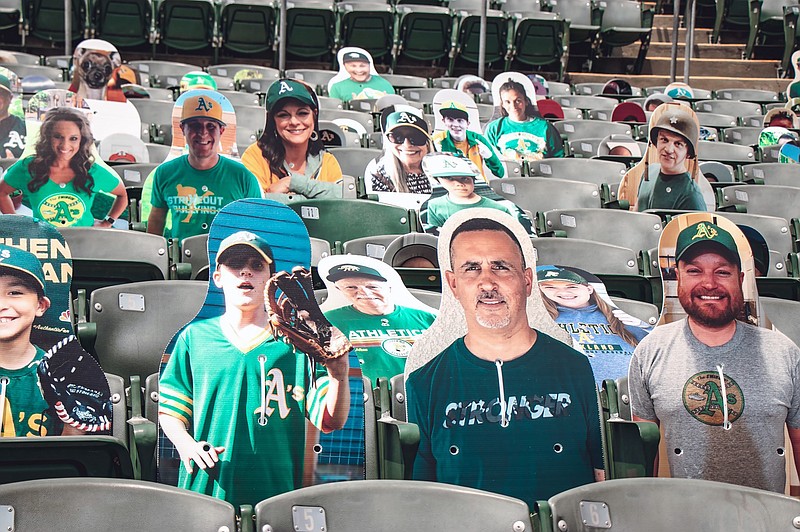 The Oakland Athletics baseball team shows fan cutouts in the stands at RingCentral Coliseum, the Athletics home field, in Oakland, Calif., on July 15. - Photo by Kyle Skinner of The Associated Press

On this day, and on all coming days as the 2020 baseball season finally begins, there is -- and will be -- no crowd. The seats of storied Wrigley Field are empty, its fans scattered to the virus-era winds.

And the "cheers" -- air quotes hanging heavy -- are recorded snippets amplified from an electronic soundboard after being airlifted out of "MLB The Show," a video game about, yes, Major League Baseball.

MLB has its reasons to deploy its version of a laugh track. First, a game without ambient sound feels dull -- a ghostly incarnation of its usual self and something baseball can't afford right now, particularly after the tone-deaf weeks of union-management acrimony that made the season even shorter than it might have been. Completely noiseless games would simply draw more attention to the fact that something's not quite right.

Also, as some players have said, the "crowd" noise obscures the muted strategy chatter and prevents the opposing team from pilfering in-game intel -- also not something MLB wants right now (cough-Astros-cough).

Over the past few days' exhibition games, everyone's been getting used to it. Announcers, many perched in booths over deserted ballparks listening to the reactions of crowds that aren't there, are hashing through the notion.

"I wasn't necessarily in favor of it, but after last night's game, I'm now a proponent. It really does add at least a little atmosphere," Pittsburgh Pirates announcer Greg Brown said this week. "I think that some crowd noise is especially important for the TV viewers and radio audiences."

Reasonable enough. But what's lost -- for players and living, breathing fans alike -- when the canned relieves the real?

One of baseball's appeals -- and, not incidentally, a branding strength even among those younger fans it so covets -- is its perceived authenticity, its continuity as time-tested national pastime.

Sure, these days analytics rule the roost, video replays decide challenges and automated balls and strikes are looming. But those are, in essence, mechanical changes.

The fake-fan baseball universe of 2020 -- well, that touches something more spiritual. It's about the nature of experience itself -- the value of the real and the emptiness of its synthetic counterpart, even if you're only watching the game on TV.

What makes going to a live baseball game special? You're there. You're immersed. You can hear and see and smell and FEEL it. Same story, but to a lesser extent, when you're watching on a screen. In both cases, you know that the players are real, their competition is genuine and the experience is really happening somewhere and being delivered to you.

Part of that implicit agreement involves the crowd. For fans are key to the story of baseball.

There is something kinetic, something intangibly sweet, about the live reaction from the stands to a big play. It both heightens the game and changes it. Energy is traded between players and fans. Together, it all forms a baseball recipe that's more than its ingredients.

OK, you say. But the virus. And besides, we just want baseball.

Fair points. Trouble is, the crowd isn't merely being eliminated. As in the old "Invasion of the Body Snatchers" movie, it's being replaced with a nonreactive shadow duplicate of itself.

Recorded in years past to make a video game feel real, the sounds (about 75 of them in all) are themselves ghosts, phantoms from exciting moments that have already had their day. They come from crowds riled up by an entirely different event than the one you're hearing or watching.

The connection between action and reaction is completely severed. The "aura" -- as cultural critic Walter Benjamin wrote almost a century ago while considering "The Work of Art in the Age of Mechanical Reproduction" -- is no more.