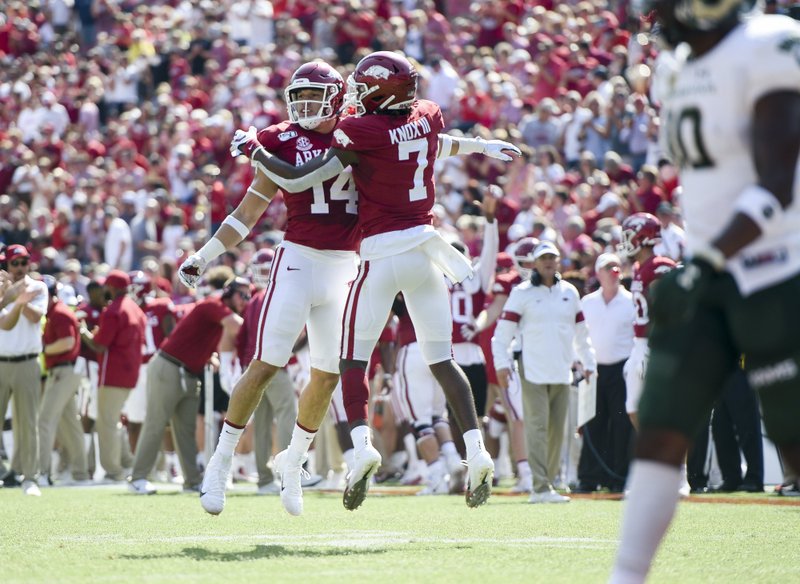 FAYETTEVILLE -- The most impressive testing results among the dozen Arkansas Razorbacks at pro day on Wednesday came from the guy who recently switched positions again.

Chase Harrell, a receiver at Kansas who transferred and played tight end at Arkansas, worked out as a 6-4, 249-pound defensive end inside the Walker Pavilion for the 22 NFL teams in attendance. He also ran a few routes and caught passes.

Harrell posted the fastest time in the 40-yard dash (an unofficial 4.51 seconds) and the 3-cone drill (6.76 seconds) among all the participants. Harrell also tied cornerback Britto Tutt with a 36-inch vertical jump, and had a best-of-the-day 10-7 on the broad jump. His 20-yard shuttle time (4.21) trailed only defensive back Matt Berry (4.13). Offensive lineman Austin Capps put up 35 reps on the bench press, easily winning the day in that category.

Of course, the Razorbacks' top draft prospects -- defensive lineman McTelvin Agim, safety Kamren Curl, linebacker De'Jon "Scoota" Harris and tight end Cheyenne O'Grady had already done the bulk of their testing at the NFL Scouting Combine in Indianapolis last month. Agim, Curl and Harris did position work for the scouts on Wednesday, while O'Grady briefly dropped in on the proceedings but did not dress out.

Agim helped his cause with his work ethic and attitude during his time at the East-West Shrine game and the Senior Bowl according to analysts.

Wrote NFL.com's Lance Zierlein of Agim, "Whipped what was in front of him at the East-West Shrine Bowl practices."

Agim had 27 reps on the bench press and a 30 1/2 vertical jump in Indianapolis.

Curl ran a 4.6 in the 40 at the combine and impressed by bench pressing 225 pounds 24 times to tie Auburn's Daniel Thomas in that category.

"That's what I wanted to do, go get some exposure at the combine," Curl said. "I feel I did that."

Curl declared early for the draft after his junior season.

Curl said he had the idea he would declare early "even before the season, but it was just my gut feeling. During the season I just felt like it was my time to go."

Harris, who officially went by the first name Scoota at the combine, like what he showed the scouts in Indiana.

"At the combine, I really turned a lot of heads," Harris said. "There were a lot of things that scouts didn't know I could do. I couldn't display it throughout scheme on defense."

Asked what he did to turn heads, Harris replied, "Just my movement. Showing them that I was faster than they thought I was. I was a high-40 guy. But I ran pretty well at the combine. I got to put my movement skills on the field."

O'Grady who left the team after the Razorbacks' 48-7 loss at Alabama last fall, was in the Walker Pavilion for a few minutes with roommate Jeremy Sprinkle in street clothes.

He explained at the NFL combine that what then-coach Chad Morris called a "mutual decision" for him to part ways with the team was actually a dismissal.

"I decided to -- very immature part of mine -- after the Alabama game (I) kinda told the coaches, 'I don't really want to come. My body's sore.' Just lame excuses. Immature. I like to call it the old C.J. I moved past that."

O'Grady ran a 4.81 in the 40-yard dash in Indianapolis, 14th among tight ends. His 34-inch vertical jump was tied for eighth and his 16 reps on the bench press tied for 11th.

Defensive end Jamario Bell remained in town, rather than traveling with the men's basketball team to Nashville for the SEC Tournament, and went through a full set of testing.

The other Razorbacks to participate were kicker Connor Limpert, defensive linemen Gabe Richardson and T.J. Smith and running back Devwah Whaley.

"I've still got some work to do obviously, but all in all I think it went pretty well," said Whaley, who was asked to sum up his time at Arkansas, which included three losing seasons and several years as the No. 2 back behind Rawleigh Williams III and Rakeem Boyd.

"Man, it was a wild experience," Whaley said. "I can say that. A lot of ups and downs. A lot of adversity. A lot of things that were out of my control. So all I can do is keep one foot moving forward and just keep pushing."