Blogger and recovering addict Emily Tilley has her photo taken at Kollective Coffee + Tea on February 23, 2020.-Photo by Grace Brown of The Sentinel-Record

"I called my grandma. I don't remember how the conversation started but I was like, 'Tell me to come home or not. I need you to tell me what to do.' But inside I was saying, 'Please tell me to come home. Come get me, bring me home.' And I remember wanting to say that so bad but I couldn't. I physically could not ... and she said, 'Emily, you just need to stay there. Don't come home.' I took my brand-new phone and threw it on the wall and I shattered the screen. I fell to the ground and I was just crying."

"I finally got up and I looked at myself. I looked awful. My pupils were huge. My hair was matted because I didn't know when I'd washed it last. I had makeup on for who knows how long all over my face and I looked dirty. I looked sick. I was pale. I had scabs all over me from picking at myself and I just remember thinking, 'Who am I? I don't know me anymore.' It was really hard because I felt like I'd lost my family, lost myself."

Now 28 and in her fifth year of recovery, Tilley is still on the journey of self-discovery as she composes her blog "Finding Emily," a recount of her experiences during a whirlwind six-month drug addiction and aftermath. A screenshot of Emily's blog.

"All I could think about was all the bad things I did to people and all these people that I couldn't tell that I was sorry," she said. "Even if I did say sorry, it wouldn't change what I did. And it was so hard. Some of the stuff, I don't know if I could ever forgive myself for and some of it I have. It was so much. I fell to my knees in the shower and just cried because it was an overwhelming amount of shame and guilt."

At 17, Tilley gave birth to her first child and a few years later was the mother of two boys.

"I never really had that feeling of having a life like most teenagers do -- going out and partying, and having fun with friends," she said. "I always wanted that and I knew I couldn't have it because I had two kids. This guy, I'll call him Michael ... he said 'Why don't just come hang out with me? We'll have fun and you can live the life you wish that you would have before you had kids' and I said, 'Alright, cool.'"

She said Michael's prescription of Ritalin was the catalyst that initiated her descent into methamphetamines.

"He said, 'Here, try this,'" she said. "And I did. It was like nothing I'd ever had before -- an amazing burst of energy and I was happy. Everything's great and nothing can bring me down. It didn't very last long at all. Maybe, not even an hour. And then he kept giving me more and more over the next couple of weeks. I would crash really hard and get into a deep depression. It would just hit that hard, really fast.

"When I got into everything, time seemed to go really fast. I met one person who introduced me to another person to another person and then I was really deep in what they call 'the game.' I was hanging out with people in gangs ... I had a car and it wasn't stolen. ... Everyone's like, 'Oh, well if you give me a ride, I'll give you drugs.'"

During the half-year, Tilley encountered several dangerous situations while deep in "the game."

"I had a gun pulled on me, just a couple weeks into it," she said. "You would think that would kind of make me think, 'Yeah, I need to stop. I need to go home.' But no. It happened twice.

" ... They were doing raids in all the drug houses. They had all run off and left me at the house I was staying in by myself while the police were coming to raid everybody ... I was in the middle of that and I think there were eight people we dealt with that got arrested in the course of about three days."

She also described a circumstance of loaning her vehicle to a friend. 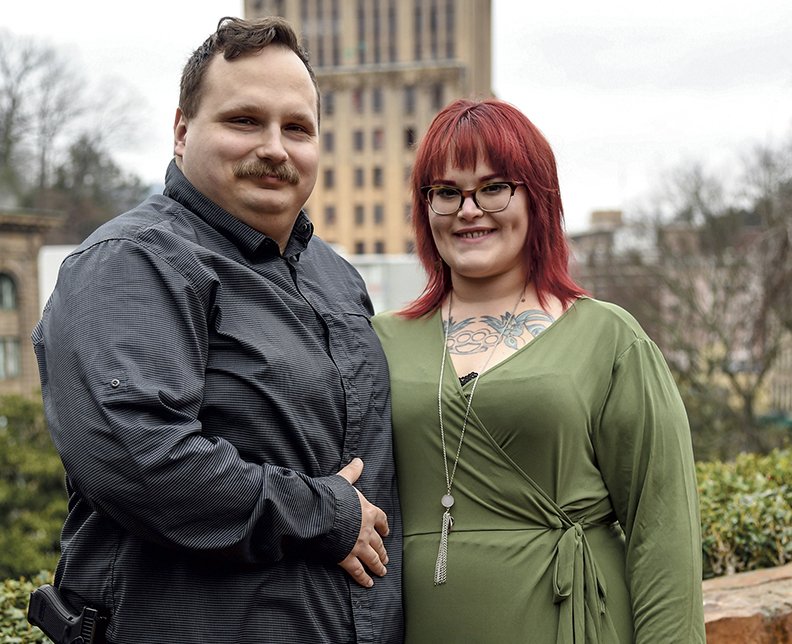 Blogger and recovering addict Emily Tilley, right, has her photo taken with her husband Mason on The Grand Promenade on February 23, 2020.-Photo by Grace Brown of The Sentinel-Record

"My car was stolen," she said. "I let one of the people -- Ty in my story -- I let him take my car. He had taken it before and he brought it right back so it was no big deal. So he took my car and he didn't bring it back on time. I get a call from him and he's running through the woods or something and he's like, 'You need to call right now. Tell the police that your car's stolen ... ' It turns out he got in my car, robbed several businesses. I was told there were TVs, computers, and all kinds of stuff in my car.

Later, he "came up to the house I was staying at and pulled a gun out in my face and all I did was smile at him and say 'What's up?'... That was probably one of the most major things, was just having somebody right up in your face. And he had said before, 'I'm gonna kill her. I know where she is, I'm gonna find her.'"

Living in Wisconsin at the time, Tilley's then-boyfriend, Mason, set on his way back to Hot Springs around the end of January.

"It really sucks to say this and I hate that it happened this way but the only thing that really got me out of there was my husband, who was my boyfriend at the time ... ," she said. "We were dating this whole time. He knew what was going on, but he couldn't do anything about it. All we could do was Skype each other. He was tired of seeing me be the way I was. ... All of a sudden, I wasn't worried about getting high. I needed to get him out of here because this (house) is awful.

"It started getting worse. More people started coming over and bringing heroin and all this other stuff we never dealt with. It was getting kind of scary."

Feb. 12, 2015, was the day she abandoned this illicit lifestyle and embarked on a path of recovery without formal rehabilitation.

"We moved in with my grandma about two weeks after he had come down," she said. "I was like 'Alright, I don't want to be high on our first holiday together.' So I decided that Feb. 12 would be enough time to come down and not be out of it. I didn't expect to get clean. It wasn't in my plans or anything but it just kinda happened. I made all my dealers mad. I purposefully made them not like me so I could not go back.

"From there, I just kind of tried to better myself. Within a month, I got a job doing drug tests which was weird. I got a car and then we found out we were pregnant with twins."

An "incredible" support system aided her as she eased back into normalcy.

"Mason has supported me through and through. When I've had really bad days and just broke down and cried. I just wanted it so bad and I knew I couldn't get it. I wanted it but I didn't want it. It was like a diet and not wanting sugar ... (My family) almost acted like it never happened. We didn't talk about it at all. I didn't start talking to my grandma about it until maybe a couple months ago ... I appreciated it because it wasn't thrown back in my face," she said.

"The first two years were the hardest. I was struggling with trying to get over addiction. I didn't know who I was. I didn't know how to talk to people and I felt like I was learning everything over again. I had to learn my likes and dislikes and figure out who I was. I had lost it completely. Trying to find who I was and get clean, raise kids, and be all these things that were really far from what I was. It was a lot."

As she keeps moving forward, Tilley recognizes her husband and four children as the key to remaining clean.

"In the beginning (of recovery), I thought 'I can't let him down. I can't let my kids down,'" she said. "He uprooted his whole life and came down here for me, who had nothing to offer him. They were my world before all of it happened. I guess I took advantage of my grandma being able to watch them so I'd go do whatever and I was really young. I was only 23. I didn't really understand what it took or what it meant to be a mom until I came back ... I realized what it meant to have the privilege of being a mother and being able to raise kids of my own, teaching them stuff, and seeing them grow and their personalities coming out. I wanted to create memories with them."

With the idea of starting "Finding Emily" being presented last year by an adviser in Tilley's life, she has future plans of developing the blog into a book. Eventually, she plans to venture into a career of public speaking, spreading in-depth awareness of drug addiction.

"I didn't think the blog would go past my friends and family," she said. "I started it in March last year. I've had several people say that I've saved their lives. I can't wrap my head around it. I've got people from Scotland, Australia, all over the world, messaging me and telling me they want me to keep writing because they get a better understanding of what their loved ones are going through or they can relate to it. ... If me being open helps one person or shows somebody else who's still out there and they can see all the things that I've gone through -- hit rock bottom and I'd hit another rock bottom. If I got out of it and can be where I am today, I want them to know that they can too."