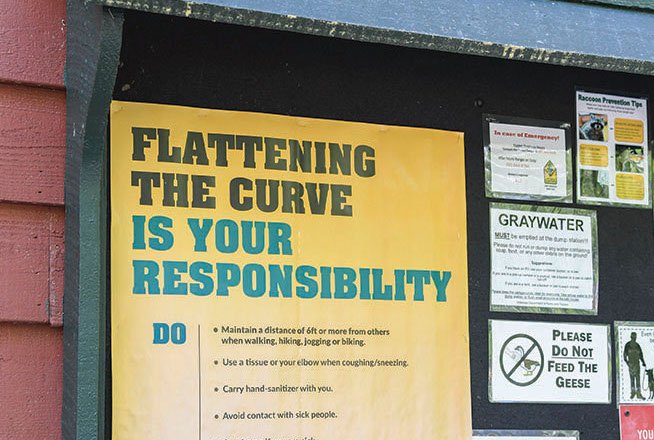 A sign at Lake Catherine State Park reminds visitors to practice social distancing. - Photo by Grace Brown of The Sentinel-Record

State campgrounds are scheduled to partially reopen today after closing April 3 due to the COVID-19 pandemic, and the superintendents for the area's two state parks say the weekend is "pretty much booked" already.

Gov. Asa Hutchinson announced earlier in the week the campgrounds would reopen today for overnight stays only for Arkansas residents who have private RVs with self-contained bathroom facilities.

"Bath houses will remain closed. Check-in and checkout will be automated," the governor's office said in a news release. Tent camping is still not allowed in the state's parks.

The superintendents said reservations for both campgrounds are already filled up.

"We had only canceled (reservations) until April 30, so people already had reservations," Vincent said. "We're pretty much booked for the weekend, and every weekend in May."

The situation is the same at Lake Ouachita, Howard said, noting the park has "no vacancies" for the weekend. He said he recently answered a phone call from a person looking to reserve an RV spot and after checking the calendar he told the caller the "first available weekend is in late July."

Being booked up is nothing new for Lake Ouachita during summer months, Howard said, but the demand for the spots is even greater this year due to other places, such as U.S. Army Corps of Engineers campgrounds, being closed.

Since the campgrounds are closed to out-of-state visitors, both Vincent and Howard said they are currently going through all the reservations and canceling those for non-Arkansas residents.

"It's awkward. In the tourist industry, we want to be welcoming," Howard said, but noted, "most understand though."

A couple of hours after the announcement the campgrounds were reopening, Vincent told The Sentinel-Record that the staff was "going through the process, looking for out of state reservations and explaining why" they have to be canceled.

Checking each reservation and then calling those who live out of state has kept their staffs busy. "It'll take us a few days," Vincent said. Since the announcement, the park has seen a large increase in phone calls, Howard said.

Vincent said her rangers will be patrolling the campgrounds checking for out-of-state vehicles. If they spot one, Vincent said the rangers will talk to the campers to find out whether they are Arkansas residents.

Over the last month, all state parks have been day-use only. Howard said the decrease in visitors over the past few weeks has allowed his staff to do maintenance work they otherwise wouldn't have been able to get to, including "replacing anti-slip material on the marina walkway" and "re-striping the parking lot."

He said just as many people have used the time to clean out their closets, the park has cleaned all its "nooks and crannies."

At Lake Catherine, they have had to deal with storm damage from severe weather on April 14, which caused numerous trees to fall, including some that landed on a suspension bridge on Falls Branch Trail. Vincent said all of the trails are open to the public again.

When she first saw the damage to the bridge, Vincent said she thought it was totaled, but now thinks they may be able to salvage it. "The suspension bridge is damaged, but our hope is to rebuild it," she said, noting it will likely be July before they are able to work toward reviving the bridge.

Hutchinson also announced the parks will reopen other services in the near future.

"On May 15, state parks will open visitor information centers, museums and exhibits, gift shops, golf pro shops, marinas, and equipment rental. Staff will limit the number of visitors allowed into the visitor centers and shops, and will enforce social distancing," a news release said.

On May 15, state parks will also reopen cabins, lodges, and RV rental to Arkansas residents, the release said, but rentals will be limited to Friday through Monday "to allow for deep cleaning between visitors."

Campgrounds remain closed at Hot Springs National Park. When asked if the park will follow the state parks' lead, Superintendent Laura Miller said, "We do not have a date to announce at this time. We currently are working with our leadership in our regional office and in Washington to determine guidance for safely reopening some services."