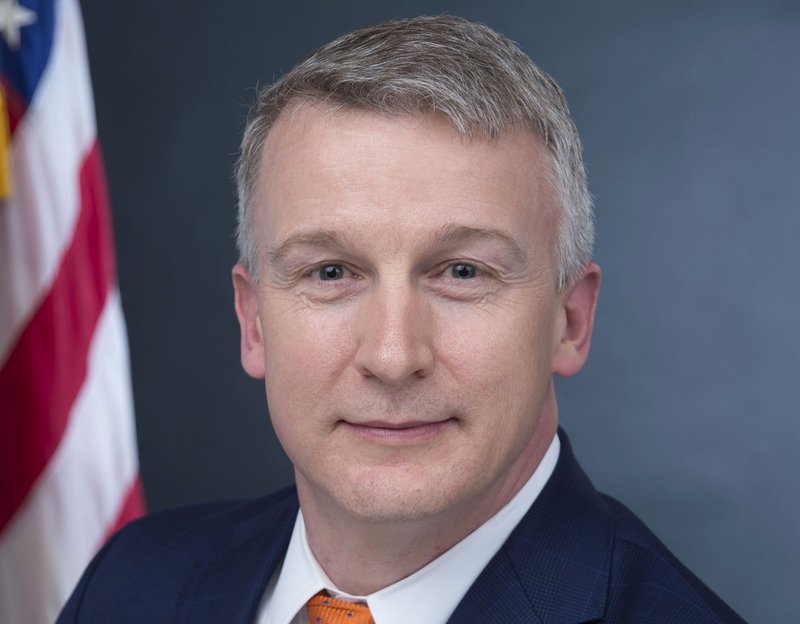 In this image provided by Public Health Emergency, a department of Health and Human Services, Rick Bright is shown in his official photo from April 27, 2017, in Washington. Bright filed a complaint May 5, 2020, with the Office of Special Counsel, a government agency responsible for whistleblower complaints. He's the former director of the Biomedical Advanced Research and Development Authority. Bright alleges he was removed from his job and reassigned to a lesser role because he resisted political pressure to allow widespread use of hydroxychloroquine, a malaria drug favored by President Donald Trump. (Health and Human Services via AP)

WASHINGTON -- Federal investigators have found "reasonable grounds" that a government whistleblower was punished for speaking out against widespread use of an unproven drug that President Donald Trump touted as a remedy for COVID-19, his lawyers said Friday.

Dr. Rick Bright headed the Biomedical Advanced Research and Development Authority, a unit of Department of Health and Human Services that focuses on countermeasures to infectious diseases and bioterrorism. He had received a job performance review of outstanding before he was summarily transferred last month, with his agency email cut off without warning.

Investigators with the Office of Special Counsel "made a threshold determination that HHS violated the Whistleblower Protection Act by removing Dr. Bright from his position because he made protected disclosures in the best interest of the American public," his lawyers Debra Katz and Lisa Banks said in a statement. The OSC is an agency that investigates allegations of egregious personnel practices in government.

The lawyers said investigators are requesting that Bright be temporarily reinstated for 45 days until they can complete their probe. OSC spokesman Zachary Kurz said his agency "cannot comment on or confirm the status of open investigations."

HHS spokeswoman Caitlin Oakley said in a statement that the department "strongly disagrees with the allegations and characterizations in the complaint" and that the whole issue is a "personnel matter that is currently under review."

Trump shrugged off the preliminary ruling about Bright's complaint.

The public will soon get a chance to size up Bright. He's been invited to testify before a House committee next week.

Bright is a flu and infectious-disease expert with 10 years at the agency, which is known as BARDA. His particular focus was on vaccine development. He was reassigned to the National Institutes of Health to work on developing coronavirus testing.

In a formal complaint that his lawyers released this week, Bright described how tension built up within HHS as the coronavirus arrived in the U.S. and quickly defied Trump's assurances that it would be contained.

Bright described a situation in which the Trump administration failed to prepare for the pandemic, then sought a quick fix by trying to rush a malaria drug to patients, though its effectiveness for COVID-19 was unproved.

His complaint detailed a frustrating attempt to jump-start U.S. production of masks and a successful effort to secure importation of testing swabs from Italy.

But his most high-profile allegations involved hydroxychloroquine, the malaria drug Trump had promoted as a "game changer" with little evidence.

He said the Trump administration wanted to "flood" hot spots in New York and New Jersey with the drug.

"I witnessed government leadership rushing blindly into a potentially dangerous situation by bringing in a non-FDA approved chloroquine from Pakistan and India, from facilities that had never been approved by the FDA," Bright said on a call with reporters earlier this week. "Their eagerness to push blindly forward without sufficient data to put this drug into the hands of Americans was alarming to me and my fellow scientists."

He said he succeeded in limiting the use of the malaria drug to hospitalized patients.

Last month, the U.S. Food and Drug Administration warned doctors against prescribing the drug except in hospitals and research studies. In an alert, regulators flagged reports of sometimes fatal heart side effects among coronavirus patients taking hydroxychloroquine or the related drug chloroquine.

Bright felt officials had "refused to listen or take appropriate action to accurately inform the public" and spoke to a reporter about the drug. He said he had to tell the public about the lack of science backing up its use, despite hydroxychloroquine being pushed by the president at press briefings.