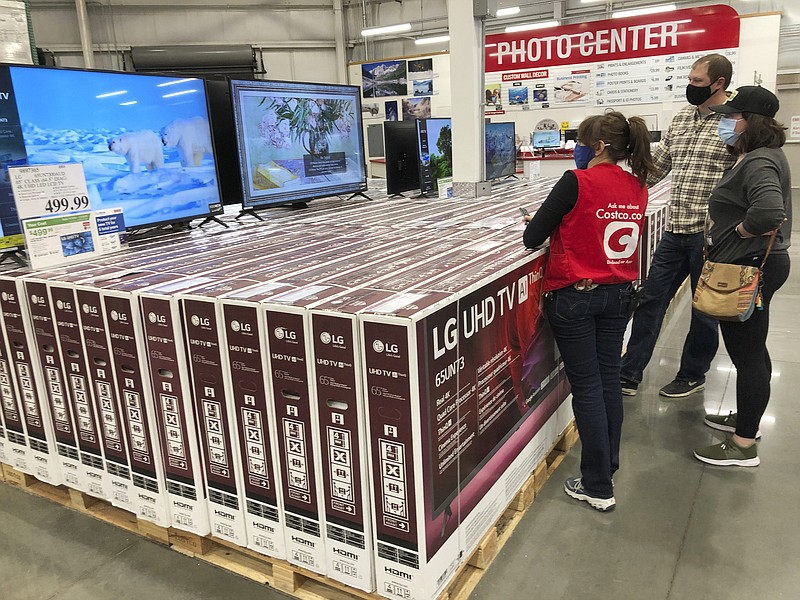 A sales associate helps customers as they consider the purchase of a big-screen television at a Costco warehouse on Wednesday in Sheridan, Colo. U.S. consumer confidence fell to a reading of 96.1 in November as rising coronavirus cases pushed Americans’ confidence down to the lowest level since August. The Conference Board said the November reading represented a drop from a revised 101.4 in October. - AP Photo/David Zalubowski

WASHINGTON -- Gripped by the accelerating viral outbreak, the U.S. economy is under pressure from persistent layoffs, diminished income and nervous consumers, whose spending is needed to drive a recovery from the pandemic.

A flurry of data released Wednesday suggested that the spread of the virus is intensifying the threats to an economy still struggling to recover from the deep recession that struck in early spring.

The number of Americans seeking unemployment aid rose last week for a second straight week to 778,000, evidence that many employers are still slashing jobs more than eight months after the virus hit. Before the pandemic, weekly jobless claims typically amounted to only about 225,000. Layoffs are still historically high, with many businesses unable to fully reopen and some, especially restaurants and bars, facing tightened restrictions.

Consumers increased their spending last month by just 0.5%, the weakest rise since the pandemic erupted. The tepid figure suggested that on the eve of the crucial holiday shopping season, Americans remain anxious with the virus spreading and Congress failing to enact any further aid for struggling individuals, businesses, cities and states. At the same time, the government said Wednesday that income, which provides the fuel for consumer spending, fell 0.7% in October.

The spike in virus cases is heightening pressure on companies and individuals, with fear growing that the economy could suffer a "double-dip" recession as states and cities reimpose curbs on businesses. The economy, as measured by the gross domestic product, is expected to eke out a modest gain this quarter before weakening -- and perhaps shrinking -- early next year. Mark Zandi, chief economist at Moody's Analytics, predicts annual GDP growth of around 2% in the October-December quarter, with the possibility of GDP turning negative in the first quarter of 2021.

Zandi warned that until Congress agrees on a new stimulus plan to replace a now-expired multi-trillion-dollar aid package enacted in the spring, the threat to the economy will grow.

Some corners of the economy still show strength, or at least resilience. Manufacturing is one. The government said Wednesday that orders for durable goods rose 1.3% in October, a sign that purchases of goods remain solid even while the economy's much larger service sector -- everything from restaurants, hotels and airlines to gyms, hair salons and entertainment venues -- is still struggling. But economists caution that factories, too, remain at risk from the surge in coronavirus cases, which could throttle demand in coming months.

And sales of new homes remained steady in October, the latest sign that ultra-low mortgage rates and a paucity of properties for sale have spurred demand and made the housing market a rare economic bright spot.

But at the heart of the economy are the job market and consumer spending, which remain especially vulnerable to the spike in virus cases. Most economists say the distribution of an effective vaccine would likely reinvigorate growth next year. Yet they warn that any sustained recovery will also hinge on whether Congress can agree soon on a sizable aid package to carry the economy through what could be a bleak winter.

"With infections continuing to rise at an elevated pace and curbs on business operations widening, layoffs are likely to pick up over coming weeks,″ said Rubeela Farooqi, chief U.S. economist at High Frequency Economics.

The government said he total number of people who are continuing to receive traditional state unemployment benefits dropped to 6.1 million from 6.4 million the previous week. That figure has been declining for months. It shows that more Americans are finding jobs and no longer receiving unemployment aid. But it also indicates that many jobless people have used up their state unemployment aid -- which typically expires after six months.

And the number of people receiving aid under the Pandemic Emergency Unemployment Compensation program -- which offers 13 weeks of federal benefits to those who have exhausted state jobless aid -- rose by 132,000 to 4.5 million.

The data firm Womply says that 21% of small businesses were shuttered at the start of this month, reflecting a steady increase from June's 16% rate. Consumer spending at local businesses is down 27% this month from a year ago, marking a deterioration from a 20% year-over-year drop in October, Womply found.

The heart of the problem is an untamed virus: The number of confirmed infections in the United States has shot up to more than 170,000 a day, from fewer than 35,000 in early September. The arrival of cold weather in much of the country could further worsen the health crisis.

Meanwhile, another economic threat looms: The impending expiration of the two supplemental federal unemployment programs the day after Christmas could end benefits completely for 9.1 million jobless people. Congress has failed for months to agree on any new stimulus aid for jobless individuals and struggling businesses after the expiration of a multi-trillion dollar rescue package it enacted in March.

The expiration of benefits will make it harder for the unemployed to make rent payments, afford food or keep up with utility bills. Most economists agree that because unemployed people tend to quickly spend their benefits, such aid is effective in boosting the economy.