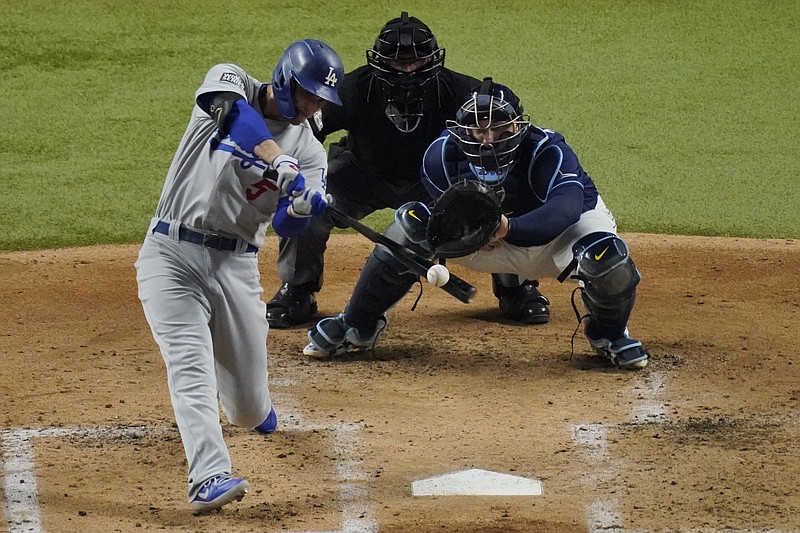 Los Angeles Dodgers' Corey Seager hits a home run against the Tampa Bay Rays Saturday during the third inning in Game 4 of the World Series in Arlington, Texas. - Photo by Sue Ogrocki of The Associated Press

Game 4 had a Hollywood ending that the Marx Brothers might not have scripted. It did not play well in Hollywoodland, where screwball comedies are made. With a Will Ferrell or an Adam Sandler in the lead role, such productions routinely make milllions and serve as escapist entertainment. In these troubled times, something helmed by the Coen Brothers or starring Eddie Murphy might work.

Not so the Game 4 loser in the first neutral-site Fall Classic. If they go on to win their first World Series in 32 years, the Los Angeles Dodgers might find themselves explaining away the signature play.

And if the Tampa Bay Rays pull this thing off, LeBron James will reign as the sports czar of Los Angeles, a role once held by another Laker, Magic Johnson. James hasn't won every finals series in which he's appeared (only four in 10) in but he's on TV more than Jake from State Farm and Flo in those Progressive spots. James has an NBA championship with three different franchises, which is the only way today's sports fan seems to keep score.

This is the third Dodgers team in four years that Dave Roberts has steered to the World Series. Whether he gets another chance in LA may come down to the best-of-three series that Rays vs. Dodgers has become.

For the Dodgers, Game 4 turned into a disaster to rival "Heaven's Gate." Were this a Coen brothers production, it might be billed "Barton Stink," Shakespeare might call it a comedy of errors and be done with it.

One strike from victory, Dodgers reliever Kenley Jansen allowed a bloop single to Brett Phillips, the latter's first hit since the regular season. No faster than one could jot down a blown save -- Kevin Kiermaier scoring from second for a 7-7 tie -- one had to mark down a loss for Jansen and the Dodgers. Chris Taylor bobbled the ball in center field and Randy Arozarena, the runner from first, kept going.

Like someone stumbling home from a neighborhood bar late one night, Arozarena fell rounding third. The throw went home, where catcher Will Smith either would tag the runner or chase him back to third base. But when Smith let the throw get away, like the Hollywood actor with the same name might have, Arozarena scrambled home. Rays 8, Dodgers 7.

If Jack Buck had been calling the game, he might have repeated his line from Game 1 of the 1988 Series. As Kirk Gibson rounded the bases after sending a backdoor slider from Dennis Eckersley into the right-field bleachers for a 5-4 Dodgers victory over the Oakland Athletics, Buck recapped the moment for posterity: "I don't believe what I just saw."

Joe Buck, Jack's son, behind the Fox Sports microphone this night, might well have said, "We'll see you Tuesday night" for Game 6.

There hadn't been a walk-off by a team that trailed entering the bottom of the ninth in the past 15 World Series. A solo homer by Alex Gordon in the ninth pulled Kansas City even with the Mets in the 2015 opener, which ended on an Eric Hosmer sacrifice fly in the bottom of the 14th. No Cardinals fan can forget David Freeze going deep in the bottom of the 11th in Game 6 of 2011 and Joe Buck repeating his father's call of 20 years earlier involving the Twins' Kirby Puckett, "We'll see you tomorrow night."

The Dodgers were this close from handing the ball to Clayton Kershaw to pitch the Game 5 clincher. Kershaw might wear the same uniform and pitch with the same hand (left) as Sandy Koufax, but he's not exactly been Mr. October for the Dodgers. Cast in the role of stopper, Kershaw worked Game 5 Sunday night with a history of second-start series failures. His postseason record, 12-12 with a 4.22 ERA, did not inspire confidence though Kershaw did look strong for six innings in the Dodgers' Game 2 triumph Wednesday night.

Saturday night's meltdown need not have happened if any of a number of things had occurred, the absolute latest being Jansen or someone backing up the throw home that got away and allowed Arozarena to score the winning run, however unartfully.

Dave Roberts could not get off that easy. The Dodgers manager went on the griddle for everything that transpired after pulling starter Julio Urias with the lead and nine strikeouts through 4 2/3 innings. Roberts earned kudos for the Dodgers beating the Braves in Game 7 of the NLCS without using Kershaw or Jansen. Fame is fleeting.

As many a big-league manager has learned, especially in October, humility can be one trip to the pitcher's mound away. Grady Little became known in Boston as "the manager who shall not be named" for leaving ace Pedro Martinez on the hill late in ALCS Game 7 against the Yankees. Little would not see the 2004 Red Sox opener

Roberts was part of something special when he stole a base ahead of a tying blow by David Ortiz in Game 4 of the 2004 ALCS against the Yankees, from which the Red Sox emerged from a 3-0 hole and exorcised all that franchise's demons. As anyone in Los Angeles can relate, 1988 is a long time to go between a hit movie or a World Series championship. In this case, a remake of "Mr. Roberts" would not be a comedy.