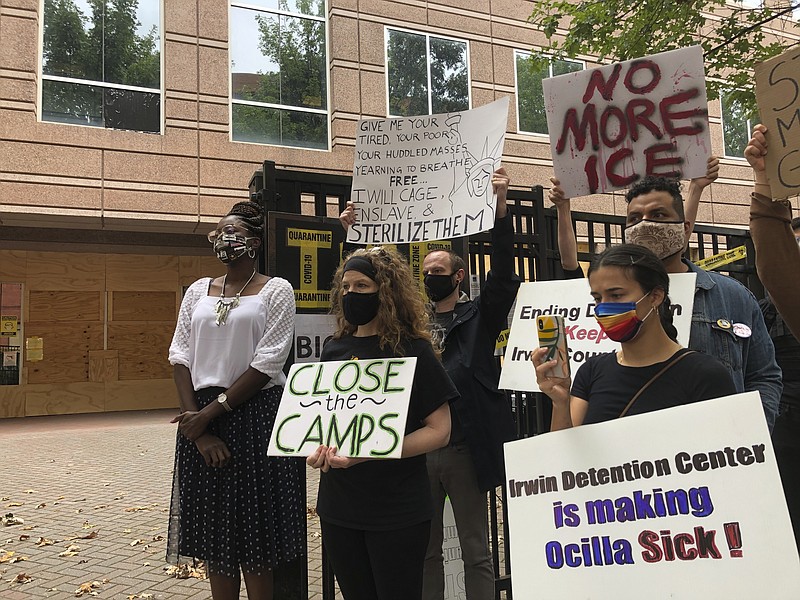 A top medical official with U.S. Immigration and Customs Enforcement released a statement "vehemently" disputing the claims, saying only two women have been referred for hysterectomies from the facility since 2018.

The statement came after Democrats seized on nurse's allegations that a gynecologist she called the "uterus collector" was performing "mass hysterectomies" -- declaring they would investigate the matter.

A follow-up news conference Tuesday in Atlanta provided little information to substantiate the claims. Lawyers for the nurse, Dawn Wooten, refused to release her full statement that she made to the Department of Homeland Security's Inspector General. She declined to take questions after making a statement with no reference to mass hysterectomies or did not quantify how many of the procedures were performed on immigrant women at the facility.

Wooten worked full-time as a licensed practical nurse at the immigration jail until July, when she was demoted.

Dr. Ada Rivera, medical director of the ICE Health Service Corps, said both surgeries had been approved by ICE officials.

"To be clear, medical care decisions concerning detainees are made by medical personnel, not by law enforcement personnel," Rivera said in the statement. "Detainees are afforded informed consent, and a medical procedure like a hysterectomy would never be performed against a detainee's will."

Rivera said ICE would fully cooperate with any resulting investigation by the Department of Homeland Security's Office of Inspector General, but said it wished Wooten had brought claims to ICE officials first.

The doctor is not named in the complaint, but lawyers who represent women at the jail said their clients have been taken to a local gynecologist named Dr. Mahendra Amin. Scott Grubman, a lawyer for Amin, said in a statement that he was confident the doctor would be cleared of any wrongdoing. Amin was previously accused by state and federal authorities of falsely billing Medicare and Medicaid in an investigation that led to a $520,000 settlement in 2015.

Democrats were quick to jump on the allegations after spending the last three years condemning the Trump administration's treatment of immigrants, including the separation of families and the detention of children in squalid conditions at the border.

"If true, the appalling conditions described in the whistleblower complaint -- including allegations of mass hysterectomies being performed on vulnerable immigrant women -- are a staggering abuse of human rights," House Speaker Nancy Pelosi, a California Democrat, said in a statement.

Rep. Bennie Thompson, a Mississippi Democrat who chairs the House Homeland Security Committee, said the panel is conducting an ongoing investigation about the conditions at ICE contractor facilities "and will be examining these new and incredibly serious allegations."

It was unclear to Wooten if women knowingly consented to the operations. She said nurses raised concerns about the doctor.

"Everybody he sees has a hysterectomy -- just about everybody," Wooten said in the complaint. "He's even taken out the wrong ovary on a young lady."

Amin told The Intercept in a story published Tuesday that he had performed "one or two hysterectomies" in the last three years. His lawyer, Grubman, declined to say exactly how many procedures he had performed, but said Amin would "vigorously deny" any allegations of misconduct.

"Dr. Amin is a highly respected physician who has dedicated his adult life to treating a high-risk, underserved population in rural Georgia," Grubman said.

The facility in Ocilla, about 200 miles (320 kilometers) south of Atlanta, houses men and women detainees for U.S. Immigration and Customs Enforcement, as well as inmates for the U.S. Marshals Service and Irwin County. It's run by the private LaSalle Corrections, a Louisiana company.

Wooten spoke little about the hysterectomy allegation during the news conference, instead focusing on her concerns that the facility wasn't testing detainees for COVID-19, that the detention center wasn't being sanitized, and that little protective equipment was available for employees.

While the 27-page complaint filed by advocacy group Project South quotes unidentified detainees extensively, it also includes detailed comments from Wooten. The complaint says Wooten was demoted after missing work with coronavirus symptoms, which she believes was retaliation for raising questions about COVID-19.

"I know I was demoted because I raised questions about why," Wooten said during the news conference. "I was told not to tell officers that there were detainees they dealt with day in and day out that were positive."

Wooten said the number of detainees infected was much higher than reported because there was no active testing and not all cases were reported, according to the complaint. The New York Times reported in June that inmates engaged in protests because of concerns about poor COVID-19 protections.

Wooten is quoted as saying the sick call nurse sometimes fabricated seeing detainees in person when they hadn't and that she saw the nurse shred a box of detainee complaints without looking at them. She said nurses ignored detainees reporting COVID-19 symptoms.

If detainees reported a fever, nurses would put them on an over-the-counter cold medication for seven days without testing them for COVID-19, she said.

Wooten said the facility declined to use two rapid-testing COVID-19 machines that ICE purchased for $14,000 each. No medical staff had been trained on them and she saw the machines used only once.

LaSalle Corrections did not immediately respond to a request for comment late Monday.

As of Sunday, 42 detainees at the facility had tested positive for the virus, according to ICE. Nationwide, 5,772 detainees were positive. 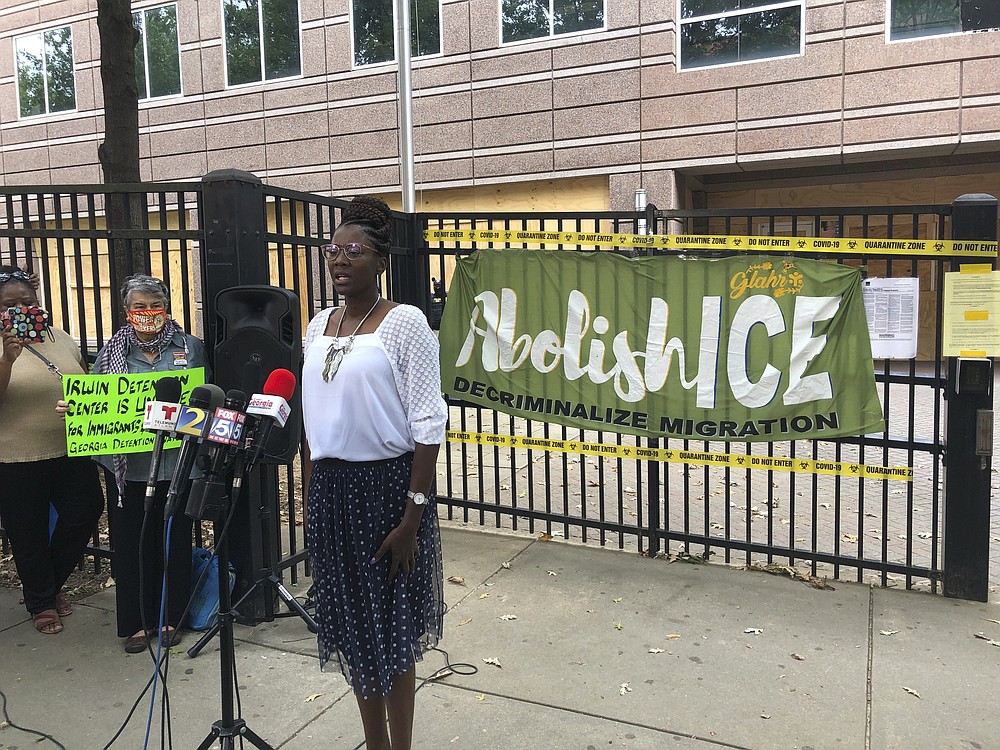 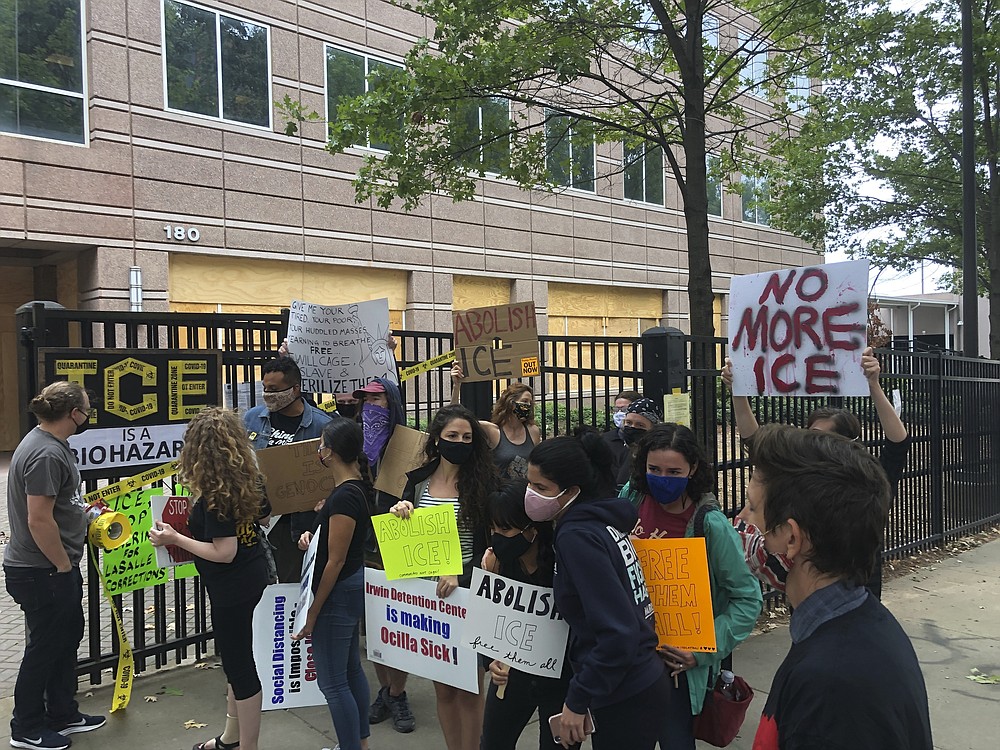