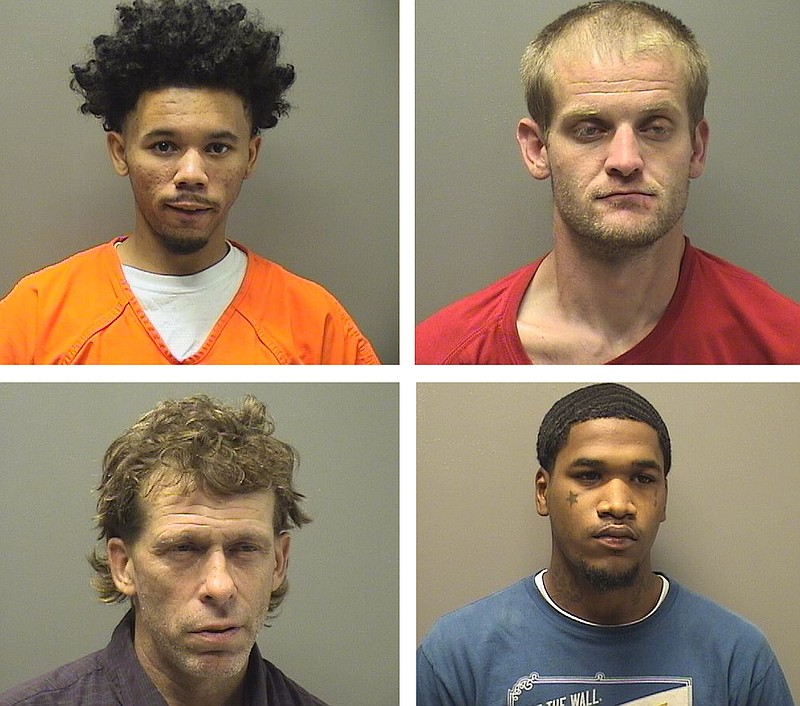 Traffic stops for headlights being off or failure to dim them properly resulted in the arrest of four suspects on felony drug charges in two separate incidents late Thursday.

The first incident occurred shortly before 9 p.m. when Hot Springs police Officer William Stockwell stopped a 2014 Chevrolet Impala after the driver failed to dim the vehicle's high beams in the 100 block of Albert Pike Road, according to the probable cause affidavit.

He made contact with the driver, identified as Demeonta Kenneth Barlow, 21, who lists a South Patterson Street address, and immediately noted a strong smell of marijuana coming from inside the car. Barlow consented to a vehicle search and reportedly admitted there was "about an ounce" of marijuana in his checkered bag.

During a search of the bag, Stockwell found a box containing 17 rounds of .40-caliber handgun ammunition and a baggie with 39.4 grams of marijuana. There were also three smaller bags, one 2 grams, one 9 grams, and one 2.7 grams, for a total of 53.1 grams of marijuana, a set of digital scales and a bag sealer found in the checkered bag.

In searching the vehicle further, Stockwell found a loaded Glock .40-caliber handgun between the driver's seat and the center console. A computer check revealed the gun, valued at $350, was reported stolen in Hot Springs on June 4. A second loaded magazine for the gun was in the driver's door panel.

Stockwell made contact with the front seat passenger, identified as Al'trevion Exavier Marcell Bryant, 20, who lists an Autumn Street address, and noted a gray bag in the passenger-side floorboard. He asked Bryant if the bag was his and he reportedly confirmed it was and gave consent to search it.

Inside, Stockwell reportedly found a glass jar of marijuana, 20 grams, and a Ziploc bag with more marijuana, 42 grams, and another scale was found underneath the bag.

The second incident occurred shortly after 11 p.m. when Officer 1st Class Richard Nunez saw a black 2012 Dodge Avenger eastbound on East Grand Avenue without its headlights turned on, and pulled it over at East Grand and Convention Boulevard, according to the affidavit.

He made contact with the driver, Eric Wesley Loftis, 29, and his two passengers, Alfred Frank Kalkan, 51, and Sequoyah Nicole Carter, 20, who all listed the same address on Huckleberry Street, and a computer check showed Loftis had a warrant for a parole violation and a search waiver on file, and Kalkan and Carter each had warrants for failure to appear, so all three were taken into custody.

During a search of the vehicle, a black bag was found in the middle part of the back seat that contained 16.5 grams of what later tested positive for meth and 5 grams of marijuana. On the floorboard, Nunez found a marijuana pipe and in the front passenger door pocket he found a meth pipe.

Loftis, Kalkan and Carter reportedly all three admitted they did not have a medical marijuana card.