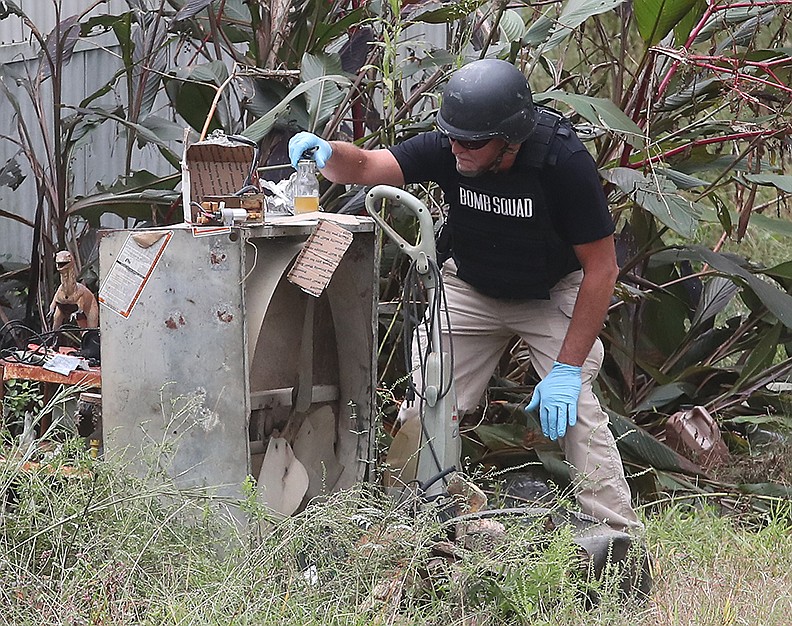 A member of the Arkansas State Police Bomb Squad looks over the contents of a suspicious package that was found inside a trailer house at 1358 Pearcy Road Thursday morning. The package was found to be non-explosive. - Photo by Richard Rasmussen

PEARCY -- A suspicious package with a threatening note found inside a trailer house on Pearcy Road Thursday morning was initially feared to be an explosive device, but was eventually determined to be harmless.

The owner of the house, located at 1358 Pearcy Road, who had reportedly just got the property on Wednesday, told Garland County sheriff's deputies he went there Thursday morning to clean it up, according to an incident report.

He said he entered the residence and found a box with a bottle and wire taped to it inside. He noted the package also had a note attached that indicated if it was opened "it would blow," the report states, so he took the package outside and set it on top of an old fan frame and called the sheriff's office at around 12:03 p.m.

The owner told deputies the previous homeowner, whose name he provided, had left the package.

Sheriff's Sgt. Terry Threadgill and Deputy Candice Stacks responded to the scene and noted the box with a bottle of "amber" colored liquid on top of it where the owner had left it. Threadgill took photos of the package and the Arkansas State Police Bomb Squad were notified and arrived on scene a short time later.

"They were not connected (to anything) and there was no detonator," she said. The incident is still under investigation.

Members of the 70 West Volunteer Fire Department also responded to the scene to assist in the incident.