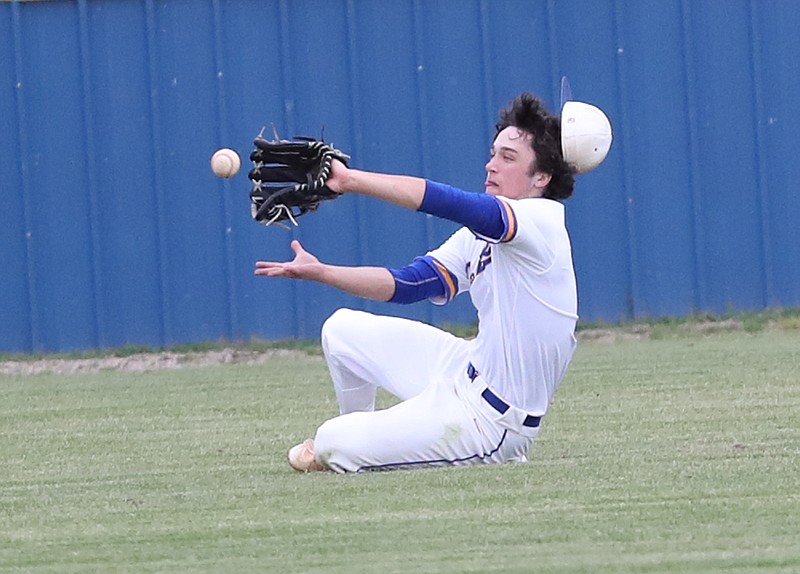 Lakeside center fielder Brennan Browning (6) hauls in a fly ball during action against Texarkana Tuesday at Lakeside. - Photo by Richard Rasmussen of The Sentinel-Record

Lakeside picked up its second loss of the season Tuesday night at home, falling to Texarkana 5-3.

With the score knotted at 3 going into the top of the sixth, the Razorbacks (6-10, 4-1 5A-South) put up two runs in the top of the sixth inning. With bases loaded, a wild throw allowed first baseman Darby Sawyer to score safely from third base before second baseman Danny McWilliams hit a sacrifice fly to left field to set the final.

"I think the way we competed, you know, never got down," said Texarkana head coach Layne Berry. "We were up a lot of the game, but the pitching, for us, has struggled. We're in the conference enough where we're finding those guys to throw on Tuesday and then those guys to throw on Friday, and so, Ty Waid, he competed the whole ballgame and threw a great game for us, had command with all three pitches. He walked a couple, hit a batter, but he kept us in the game and gave us a chance to win."

After a scoreless first inning, Sawyer led off with a single to right field. After stealing second, a sacrifice fly by third baseman Ryan Wardlaw plated Sawyer for the early edge.

Lakeside (11-2, 4-1 5A-South), whose previous loss was to Class 6A Conway, responded in the bottom half of the inning with first baseman Ethan Rogers hitting an RBI single up the middle to score Griffin Gulley to knot the score at 1.

After left-handed pitcher Wyatt Gibson held Texarkana in the next two innings, the Rams took their first lead of the night in the bottom of the third on a double steal to catch the Hogs' defense off-guard. Utility player Braylen Russell stole home while designated hitter Griffin Gulley took second for the lead.

Lakeside head coach Garrett Bock said that his team just was not in rhythm Tuesday night.

"You know, I don't think we came out as well as we have in the past," he said. "I think that was a result of yesterday's practice and earlier today. I thought we kind of went through the motions a little bit, and it ended up getting us (beat) against a very good team. ... I'll think they'll respond, though. We've had a couple of tough losses and they've responded well; We just got to keep plugging away and play the way that we play."

Texarkana regained the lead going into the top of the fifth off of an infield single from catcher Graydon Martin to plate right fielder Shane Sutton. Center fielder Braylon Bishop followed with a double to center near the wall to score another run.

"I thought we left a lot of runs out there," said Berry. "I felt like, you know, we had those two big hits. We had two big ones that scored some runs. We talk about that all the time where we get those opportunities, we got to make them pay. I thought we struck out a little more than normal but, you know, their lefty's (Gibson) tough to hit. He's spinning the ball, and he can throw change ups away, so he kind of kept us off balance, but I'm proud of the guys that we competed and pulled out a victory."

The battle continued in the bottom half of the inning as the Rams shot back with an RBI double from Gulley, though the go-ahead run was called out at the plate to end the inning.

Waid pitched six innings for the Razorbacks, striking out seven while walking two. Bishop tallied two strikeouts in one inning to close it out.

Gibson tallied four strikeouts and two walks for the Rams while spending six innings on the mound. Andrew Cox came in to close, tacking on one strikeout.

"I thought Wyatt did a good job," Bock said. "He got behind hitters. One thing that he's got to work on is, obviously, hold runners and throw strike one. Strike one to us is the most important pitch that we have and we didn't do that all the time. We were around 2-0, 3-0, 3-1, and you give those counts to those kind of hitters, they're going to take advantage of it."

Cox and Gulley both hit doubles, catcher Chace Tittle was 2 for 4, and shortstop Peyton Ballard had two stolen bases.