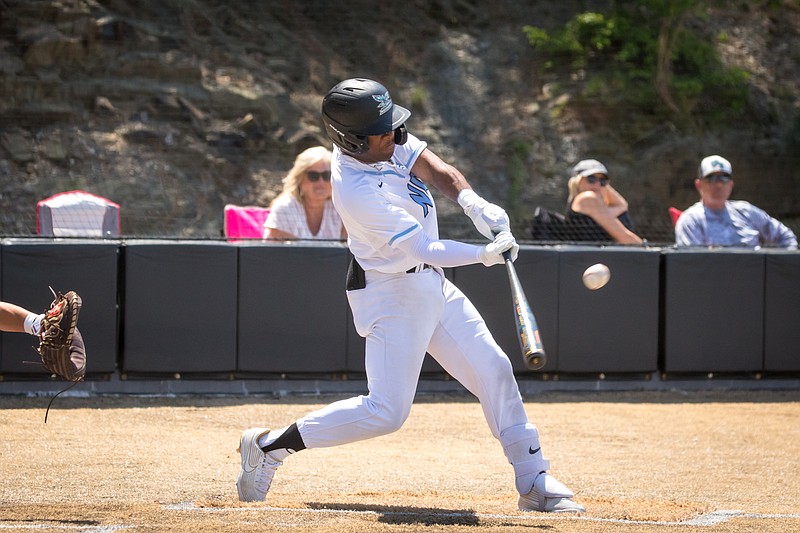 National Park freshman Demias Jimerson, of Malvern, takes a swat at a ball during Sunday's game against Murray State. The Nighthawks defeated the Aggies 11-9 in the series finale to avoid a sweep. - Photo courtesy of Aaron Brewer

Trailing 6-0 going into the fourth inning of the finale, NPC scored three in the fourth, one in the fifth and two in the sixth to pull within 8-7 going into the seventh. Malvern freshman Demias Jimerson hit a three-run home run in the bottom of the sevent to propel thte Nighthawks to victory.

Jimerson was 3 for 4 at the plate with two home runs and six RBIs while Lakeside freshman Jesus Minjarez went 2 for 3 with a homr run, and freshman pitcher Ty Jackson earned the win off two innings in relief.

Murray State took an 8-0 lead behind big home runs before NPC plated three runs in the bottom of the eighth in the 8-3 loss. Mountain Pine grad Matthew Herron gave up four runs on four hits with three strikeouts in 2 2/3 innings on the mound.

The Nighthawks picked up just three hits in the first game of Sunday's doubleheader. The Aggies had a solo home run in the first en route to a 6-0 win in seven innings with sophomore pitcher Mason Sellers giving up five runs off seven hits over 4 2/3 innings while fanning four.

The Nighthawks fell behind early Friday night, struggling to hit in the paint while the Lady Colts took control from the perimeter. Trailing 20-10 after 10 minutes, freshman India Atkins put up 5 points in the second to help chip away at the decisit, but Arkansas-Cossatot stretched to a 33-20 lead at intermission.

The Lady Colts pushed out to a 51-31 lead with 2:26 left in the third, but four 3-pointers in the period, including two from Atkins, NPC pulled within 55-38 going into the final frame. NPC hit an 8-0 run to start the fourth to pull within 9, bringing the game within 62-55 with a minute left, but it could not complete the comeback.

Atkins led the Nighthawks with 18 points in the loss.

The Nighthawk men started off strong Saturday, led by 13 points from freshman JoQuarius Valrie who hit 6 of 6 from the free throw line and 10 points from freshman Kylil Anderson. Freshman Garrett Powell starred on defense as NPC held the Pioneers to just a single 3-pointer in the first half for a 42-38 halftime lead.

Valrie led the team with 19 points, Traylor added 15, Anderson had 12, and Powell finished with 11.