The color of Masters in April is missing a red shirt 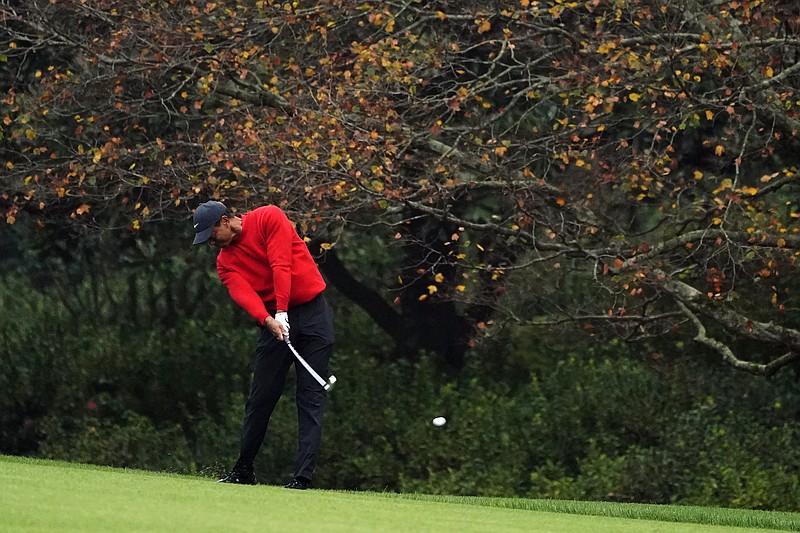 Tiger Woods hits on the second fairway during the final round of the Masters in Augusta, Ga., on Nov. 15, 2020. Gone are the autumn hues of gold, orange and red in the trees, the brown leaves mixed in with the pine straw on the ground. Augusta National is blazing with pink and red and purple azaleas, accented by the white blooms of dogwood. Postponed last year because of the COVID-19 pandemic, the Masters is back to being that annual rite of spring. - Photo by Matt Slocum of The Associated Press

AUGUSTA, Ga. -- From the dogwoods and their white blooms to thousands of azalea bushes bursting with purple and pink, all the April colors have returned to Augusta National except for one.

Tiger Woods in his traditional Sunday color has become an indelible part of the Masters over the last 25 years. It dates to the practice round he played with Arnold Palmer and Jack Nicklaus, after which Nicklaus suggested Woods might wind up with more green jackets than the King and the Bear combined.

So there is a big void this year.

"You can't -- especially at Augusta -- you can't go there and not think about the guy," two-time U.S. Open champion Curtis Strange said. "Changed the game we knew basically in front of our eyes at Augusta."

The 1997 Masters -- one year after Nicklaus made his bold prediction -- remains a watershed moment in golf. Woods broke 20 records that week when he won by 12 shots as a 21-year-old in his first year playing as a pro. From there, he carried golf to a new wave of popularity and, because of television contracts that followed, made everyone around him richer.

The 2019 Masters was the perfect bookend. Four back surgeries, four knee surgeries, public embarrassment from his private affairs, and at 43 he overcame it all for his 15th major, fifth green jacket and pure joy when he scooped his son into his arms.

He won the career Grand Slam three times over.

But the link was always Augusta.

Xander Schauffele was asked the first thought that entered his head when he plays the Masters. He has only played three times, but the answer came quickly.

Woods' absence is nothing new, only the circumstances. He first missed the Masters in 2014 when he had the first of his five back surgeries. He missed two other times (2016 and 2017) trying to heal from two others.

But there was always belief he would return, even when the pain in his lower back was so bad that he barely could walk at the Masters Club dinner for champions in 2017.

And there was hope he could win again, which he did.

Woods shattered tibia and fibula bones in his right leg in multiple locations from a Feb. 23 crash when his SUV ran off the road and down a hill in the coastal suburbs of Los Angeles. There were additional broken bones in his ankle and foot, now held together by screws and pins.

He returned home about three weeks ago with no update on his condition. That hasn't kept medical experts from suggesting the nature of his injuries make it unlikely he will play again.

Justin Thomas and Rory McIlroy are in a small circle of players who have grown close to Woods and have earned his trust and respect for privacy. Both have dropped by his house to see him.

"Spent a couple hours with him, which was nice. It was good to see him," McIlroy said. "It was good to see him in decent spirits. When you hear of these things and you look at the car and you see the crash, you think he's going to be in a hospital bed for six months. But he was actually doing better than that."

Thomas feels lucky to get an early invitation to the practice rounds with Woods and Fred Couples. That's what he misses the most about this week.

"I went over and saw him a couple times last week and tried to go over a couple times during the week whenever I'm home and see him," Thomas said. "We texted Friday morning, and he said it's kind of starting to set in. He's bummed he's not here playing practice rounds with us, and we hate it, too."

This week was looked upon as a time to reflect on one of golf's unmatched achievements. It was 20 years ago this week that Woods won the Masters, making him the only player to hold the four professional majors at the same time.

McIlroy recalls the hype over the 2015 Masters. He had won the British Open and the PGA Championship the year before, and a green jacket was the final piece of the career Grand Slam. He would always get another chance. To win all four in a row comes around once in a career. Woods faced questions about that for seven months and still won in a tight final round against Phil Mickelson and David Duval.

It's too early to say whether Woods will ever compete again at the Masters. He won a U.S. Open with shredded knee ligaments and two stress fractures. Four back surgeries didn't keep from a green jacket.

This might be asking too much, especially now that he's 45 and wasn't showing much form even before his horrific car crash.

"I know he's at home and he's fully focused on the recovery process, and I feel like he's mentally strong enough to get through that," McIlroy said. "And once he does, broken bones heal, he's just got to take it step by step. I know he'd love to be here. And I'm sure he's going to put everything he has into trying to be ready to play here next year." 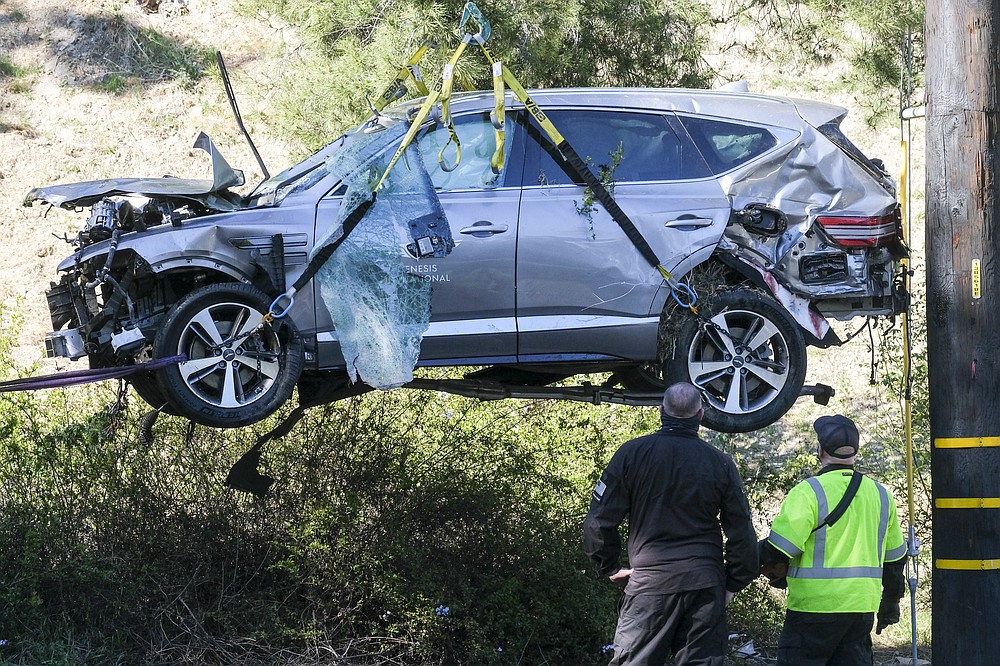 FILE - In this Feb. 23, 2021, file photo a crane is used to lift a vehicle following a rollover accident involving golfer Tiger Woods, in the Rancho Palos Verdes suburb of Los Angeles. The Los Angeles County sheriff says detectives have determined what caused Woods to crash his SUV last month in Southern California but would not release details on Wednesday, March 31, 2021, citing privacy concerns for the golf star. (AP Photo/Ringo H.W. Chiu, File) 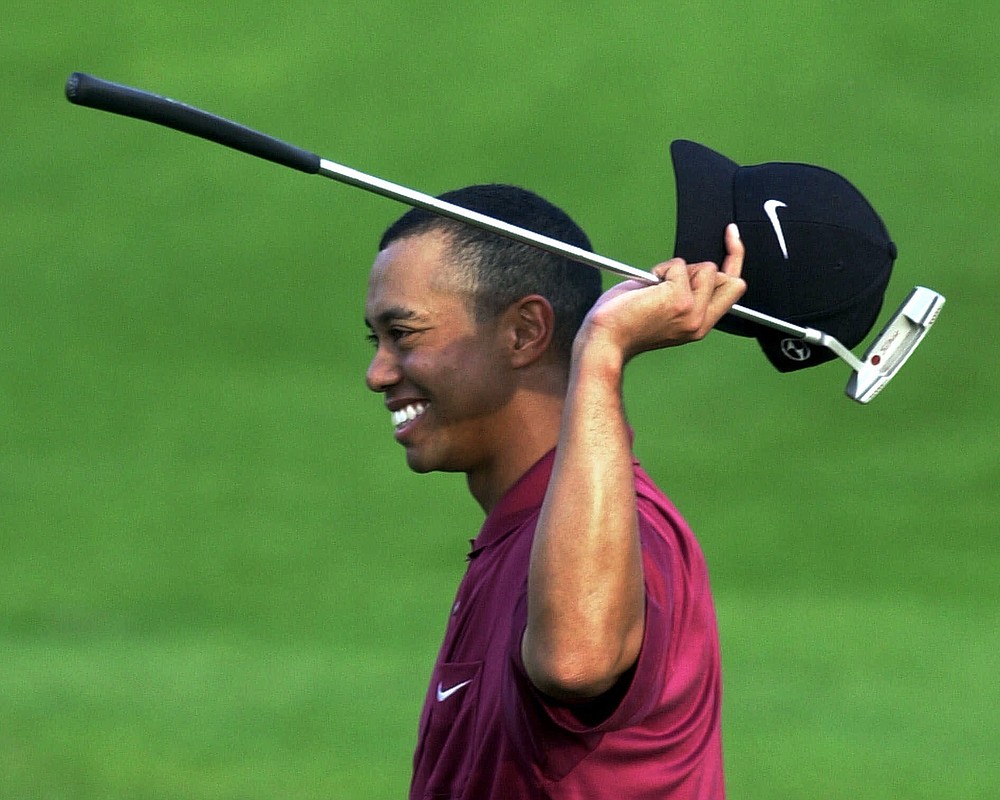 FILE - In this April 8, 2001, file photo, Tiger Woods smiles after winning the Masters at Augusta National Golf Club in Augusta, Ga. It was 20 years ago this week that Woods became the first player to hold all four majors at the same time by winning the Masters. (AP Photo/Amy Sancetta, File) 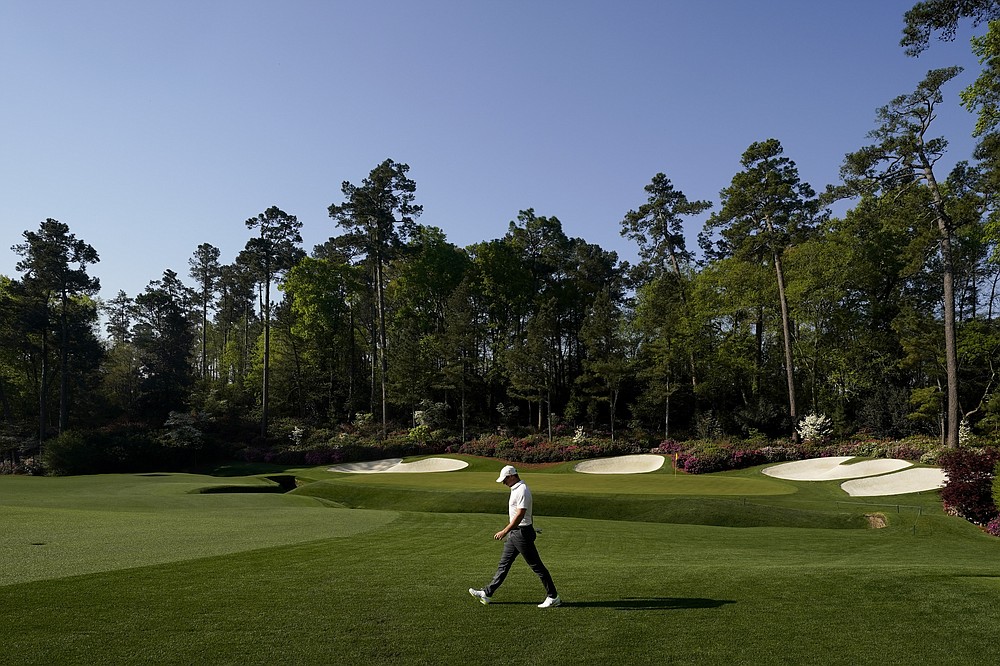 Rory McIlroy, of Northern Ireland, walks on the 14th hole during a practice round for the Masters golf tournament on Tuesday, April 6, 2021, in Augusta, Ga. (AP Photo/Charlie Riedel) 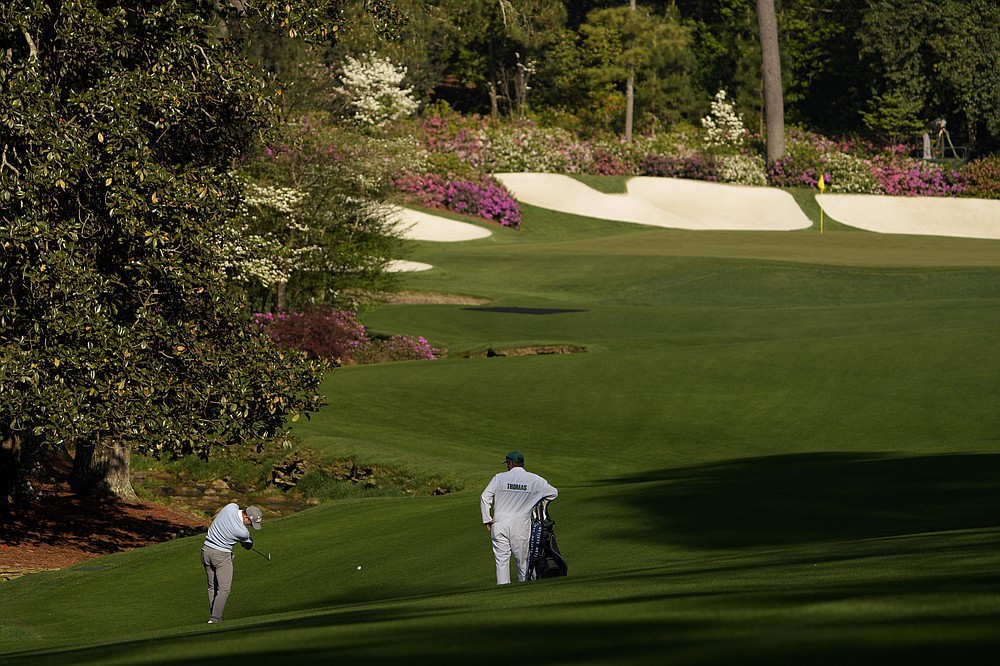 Justin Thomas hits from the fairway on the 13th hole during a practice round for the Masters golf tournament on Tuesday, April 6, 2021, in Augusta, Ga. (AP Photo/David J. Phillip)
ADVERTISEMENT