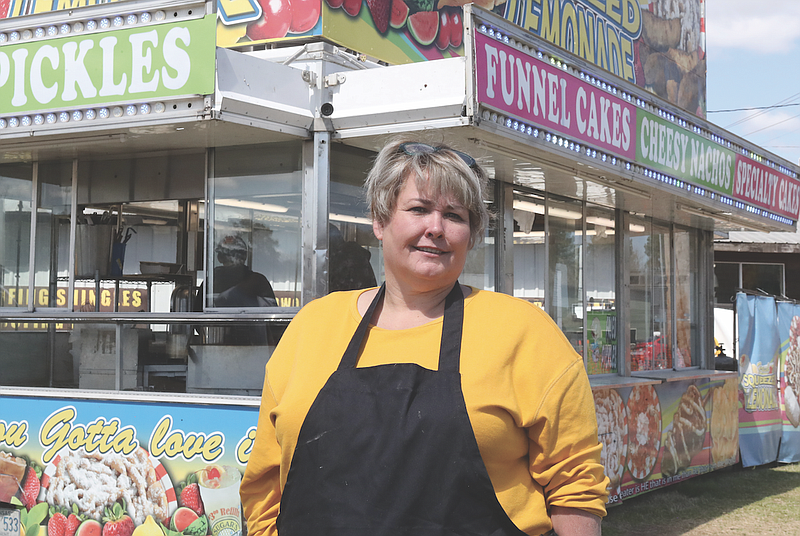 Allison Brown, owner of Sugar Concessions. - Photo by Richard Rasmussen of The Sentinel-Record

Local food truck owner Allison Brown has been in the business since she was 13 years old, and with turns in life always taking her back to it, she learned the foundation of the business even before food trucks trended, constantly progressing her style to offer something new and unique to customers.

Nearly 45 years ago, when Brown was 13, her mom had an idea to purchase a food truck and begin selling funnel cakes. The idea derived from seeing a couple in their church have success in selling funnel cakes for a fundraiser, and during a time the cakes were "brand-new," she said her mom had a plan to follow her dad's tile-laying business that also traveled. However, plans changed when her mom realized she could instead book fairs and festivals, which was beneficial to the whole family when her dad's business came to a lull.

From then on, she essentially grew up traveling in the food truck business with her family.

When deciding to leave the business to attend college, Brown accidentally got pregnant.

"'What am I going to do?'" she thought. "And my parents supported me 100%, it was incredible. ... I had graduated from a Christian school and I was the first graduate. ... I had flipped everybody's world upside down."

She still decided to leave her family's business and attend school.

"I went back to college, and I was always told 'You're not college material, you need to find a good husband and get married,'" Brown said. "I finished here, got my associate degree in accounting, transferred to UALR and, again, back in the day there was a stigma about how you had to dress and how you had to present yourself and it was not in my genes. I walked out.

"I called my dad and said 'Where are you?' and he said Amarillo. ... My 5-year-old and I got on a plane and flew to Amarillo and I have never looked back."

Despite having grown up in the business, this move put Brown on a newfound path of learning that included many twists and turns.

"When we left there he put me in a truck driving a trailer. ... And I was like 'How do I do this?' And he was like 'The trailer will follow you,'" she said. "I drove with my daughter probably 30 miles outside of town and I pulled over and said 'I cannot drive with her talking.' I was a nervous wreck."

Eventually getting married and having another child, Brown began to grow her own family in the business. Initially, she and her husband worked under her dad, but as they began to expand the business with the purchase of more food trucks, they became partners with her dad, merging and becoming a corporation: Sugar's Concession.

To keep from limiting themselves as their business grew, the Browns also transitioned from "Sugar's Funnel Cakes" to "Sugar's Concessions." This brought about an array of new items to the menu.

Originally starting with primarily funnel cakes, Brown now serves new creations regularly. To give just a taste of a few of her creations, she has been known to serve:

• Funnel cake sandwiches that are a play on Monte Cristo sandwiches. The concoction is started with a funnel cake base, and topped with mustard, turkey, ham and whatever fresh gooey cheese Brown has on hand. It's topped with the other half of the funnel cake and given a sprinkle of powdered sugar. Before sending it out, the sandwich gets a drizzle of her homemade triple berry bourbon sauce.

• A mint jubilee for Oaklawn that is a play on a mint julep. With no alcohol, the drink is made with Brown's tea, fresh-squeezed orange juice, freshly squeezed lemon juice and mint tea.

• A fried green BLT that serves as one of Brown's favorites. The sandwich is made with a hardy white bread smeared with butter and placed on the grill. Like any good sandwich, Brown said, this one is all about the sauce. A homemade orange sauce is smeared on the inside of the sandwich, topped with thick-sliced bacon, romaine or leaf lettuce and hand-breaded fried green tomatoes made with panko and homemade seasoning. It's covered with more orange sauce and another piece of bread before being flipped on the grill for an added crispness.

• Deep-fried lemonade that is a play on actual lemonade. This creation was first introduced a few years ago at the Tulsa State Fair, and isn't always available on Brown's menu due to the intricate process it takes to make it right. Made with either angel food cake, plain pound cake or lemon pound cake, the creation starts with stabbing a stick through the caked and soaking it in her fresh-squeezed triple-strength lemonade. The stuck cake is then frozen and dipped in batter before being deep-fried. When made in Tulsa, Brown said they had regular lemonade and strawberry lemonade available, and every bite was a punch of lemon.

• Gyros -- something Brown started making after she got tired of ordering the Greece dish in America and was never given it how she preferred. Again, stating the sauce makes the sandwich, the start of this sandwich begins with her homemade dill sauce smeared on pita. Not a traditional gyro, Brown makes hers with lettuce and grilled versus raw onions. Then comes the meat, feta cheese and tomatoes. And the most important part, she said, is that when you get it, it will be pretty.

Not being trained in culinary, Brown said the Food Network has taught her "a whole lot" and she always strives to make what she sells the "best out there." Authentic is the goal, she said.

With an extended menu, Brown started to think "What can I do to extend my fair season?'"

When her youngest son began college about three years ago, the idea to do a year-round food truck struck, and what better place to spend her off-season than in her hometown of Hot Springs?

Stationing in and across from Oaklawn Racing Gaming Casino and next to the Chicken Express on Albert Pike, Brown and her crew began serving the community from her carnival-style food truck -- a move of the fates two years prior to the start of the pandemic that temporarily diminished fairs and festivals.

"We did the food truck the first year for about a month just to see if it was going to work. People thought we were crazy," she said. "We opened it up, did all the work. I thought I was going to sell plate lunches. The first day I opened I did a smothered pork chop, all the homemade vegetables; I mean it was good food. Way too heavy for lunch, so I pulled back. They kept ordering my sandwiches, and I had a six-burner commercial stove. ... I'm learning. I've been in the business for 40 plus years and I'm still learning. If I don't learn something new every day, I'm failing at my job."

In her job, Brown said she has to be "consistently innovative."

She notes that not serving from a fairground and paying fees to do so, she is able to serve food at a more fair price.

Brown is now going back to college while the COVID-19 pandemic has placed her primarily in Hot Springs even during fair season, and said her next steps may be distancing herself from the hands-on work and providing future food truck owners with business consulting and possibly even pursuing a degree in culinary arts.