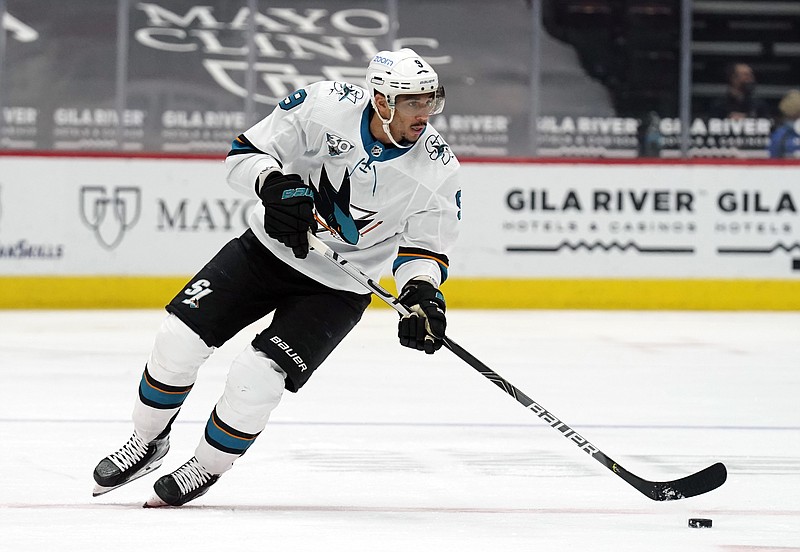 San Jose Sharks left wing Evander Kane moves the puck during the team's March 26 NHL game against the Arizona Coyotes in Glendale, Ariz. The NHL says it will investigate an allegation made by Kane’s wife that he bets on his own games and has intentionally tried to lose for gambling profit. - Photo by Rick Scuteri of The Associated Press

One thing seems clear by glancing at social media surrounding San Jose Sharks forward Evander Kane. He has some issues, and his wife says betting on his own team is one of them.

Anna Kane said some other things, too, in an Instagram post over the weekend that also accused the hockey player of partying in Europe while the bank was going after their house and she was struggling to buy formula for their baby.

Awful, of course, if true. But there are two sides to every story, and Kane responded by saying he and his wife are going through a contentious divorce and denied he had ever bet on any game he played in -- or any NHL games at all, for that matter.

"I love the game of hockey and would never do any of what was alleged," Kane posted online.

Where the truth lies remains to be seen. But the NHL was so alarmed by the allegations that the league immediately launched an investigation into them.

With good reason. Any inkling that games are being thrown or somehow compromised because players are betting on the game is the worst nightmare of a commissioner of any major sport.

But when you're suddenly all in on sports betting like the NHL and other major leagues are, it's hard to find the proper moral high ground to occupy. What was once a sin is now a profit center embraced by sports leagues eager to make a few dollars any way they can.

"The integrity of our game is paramount and the League takes these allegations very seriously," the NHL said in a statement.

That Kane was involved in gambling, if not sports betting itself, was common knowledge before Anna Kane made her allegations on Instagram. Kane was sued by a Las Vegas casino for unpaid gambling debts of $500,000 run up while the Sharks were playing in Las Vegas in 2019, and a California bankruptcy filing earlier this year obtained by The Athletic indicated he lost $1.5 million gambling over the previous year.

But there's gambling and then there's sports betting. For years, the major sports leagues treated them the same -- but now that they have skin in the game they are careful to point out the differences.

Losing money at a craps table isn't especially concerning. Losing while betting on your own games is another matter indeed.

In another time, Paul Hornung and Alex Karros lost a year in the NFL because they wagered a few hundred dollars on football games. Their 1963 suspension came complete with a warning about the curse of gambling from commissioner Pete Rozelle.

"This sport has grown so quickly and gained so much of the approval of the American public that the only way it can be hurt is through gambling," Rozelle said.

Meanwhile, Pete Rose recently turned 80 and the man who will likely hold the major league hits record forever remains ineligible for the Hall of Fame. Though Major League Baseball and its teams now have lucrative deals with various betting sites, Rose remains a pariah for doing what the league tries to entice millions of sports fans to do now -- bet on its games.

Rose's ban should have been rescinded years ago, but that's a topic for another time. Rose has long since paid his penalty and baseball has long since made its point.

Still, it would be awfully hard for an individual player to successfully throw a game. Betting lines are constantly analyzed on both sides of the counter, and the amount of money needed to fix a game would be easily spotted long before a puck is dropped or a football is kicked.

That doesn't mean it's impossible, just awfully hard. And that's why leagues have rules about players betting on their own sports and their own teams, even if there are sports books in the stadiums and arenas where they play.

So, yes, the NHL should be alarmed about Anna Kane's claims. The league should investigate them and do it quickly.

A lot of things have changed in the last few years as sports betting becomes a part of the accepted sports fabric. Leagues are delicately balancing added income from sports betting deals against the possibility something nefarious could happen because of them.

One thing that hasn't changed is the bedrock rule that players don't bet on their own sport, much less their own games.

Tim Dahlberg is a national sports columnist for The Associated Press. Write to him at tdahlbergap.org or http://twitter.com/timdahlberg 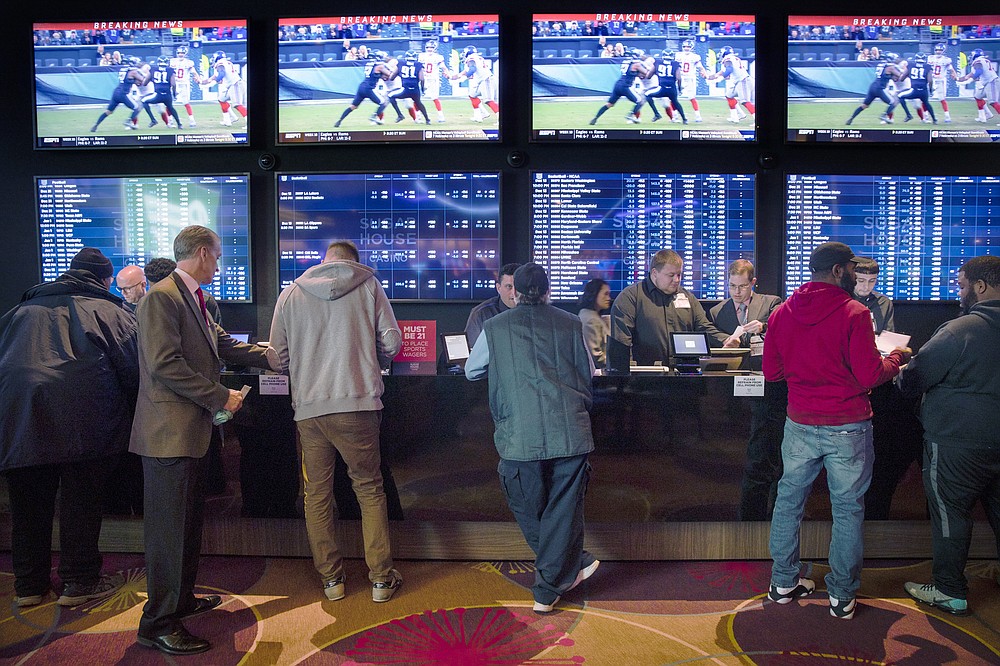 FILE - In this Dec. 13, 2018, file photo, gamblers place bets in the temporary sports betting area at the SugarHouse Casino in Philadelphia. State regulators said Monday, July 19, 2021, that Pennsylvania smashed its record for gambling revenue, reporting nearly $3.9 billion in the last fiscal year as every category of wagering showed growth in one of the nation's largest casino and gambling states. (AP Photo/Matt Rourke, File)