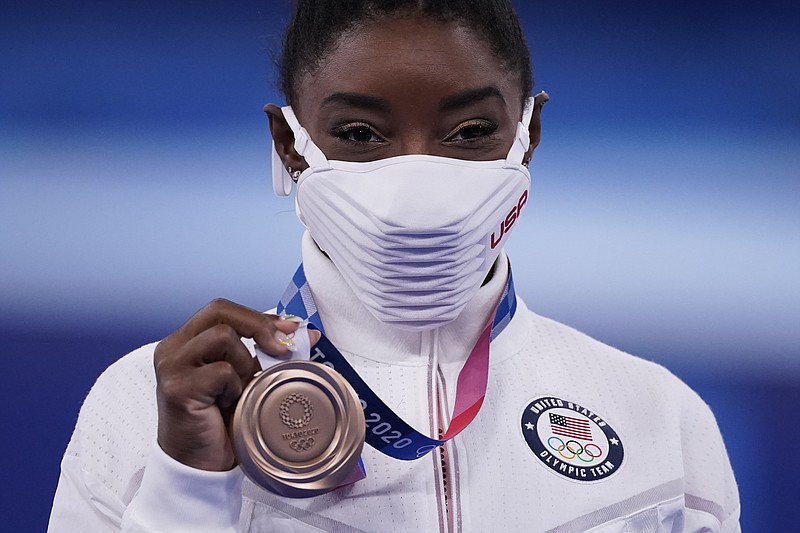 Simone Biles displays her bronze medal after the balance beam competition at the 2020 Summer Olympics Tuesday in Tokyo. - Photo by Ashley Landis of The Associated Press

TOKYO -- Simone Biles is taking a break. Maybe a permanent one. Sunisa Lee, Jade Carey, Jordan Chiles and Grace McCallum are all basically sprinting to college. MyKayla Skinner is ready to start a family.

The six American women who are bringing home six medals from the Tokyo Olympics may never compete internationally again. Biles is heading home to Texas to focus on her mental and physical well-being before headlining a fall tour. Lee wants to move into her dorm room at Auburn next week with her Olympic all-around gold in tow, eager for a respite from an elite environment she described as "crazy."

Not exactly the most glowing endorsement of what's happening both inside and outside the top level of the sport. Lee pointed to heightened attention surrounding the Olympics -- particularly by the media, social or otherwise -- as contributing to a level of stress that became problematic.

"The more pressure you put on yourself, the harder it's going to get," said Lee, who won three medals in all. "And it just takes the fun out of gymnastics, which really sucks because I started gymnastics because I loved it. So that kind of like takes it all away from us."

It's a level of attention, however, brought about by the dominance the U.S. women have displayed over the last decade, a standard the Americans did little to distance themselves from in the run-up to the Games.

The U.S. arrived in Japan as heavy favorites to extend a winning streak that dated to the 2011 world championships. It's one of the reasons U.S. high-performance director Tom Forster said the Olympic selection committee opted for rank order from Trials when putting the four-woman team together instead of taking one that could potentially score a tenth or two higher.

Forster said he wanted to protect the "integrity of the process" and believed a tenth or two wouldn't matter. And he was right. A resurgent Russian team topped the U.S. by more than a point during qualifying and earned its first team gold since 1992 in the finals while the Americans held on for silver after Biles opted out of the competition following one rotation while dealing with a phenomenon called "the twisties."

While Biles' stunning admission shifted the discussion from her pursuit of a second straight Olympic title to the importance of athletes making their mental health a priority, it also in a way showcased just how deep the group the U.S. brought to Tokyo was even with Biles spending most of the meet watching from the stands.

The U.S. women medaled in every final, the only program -- men's or women's -- in the meet to do that at the Ariake Gymnastics Centre. Yet USA Gymnastics is making an effort to get away from using Olympic bling as the only metric that defines success.

While president Li Li Leung emphasizes progress is being made in creating a more athlete-centric culture and some gymnasts -- Skinner in particular -- have praised the changes they've seen, work remains to be done.

The messaging from leadership remains an issue. So do optics.

Both Skinner and McCallum admitted they didn't have any real clarity on the team selection process. Allan Bower, an alternate on the men's team, spoke out after the organization didn't offer him funding or insurance. Friends put together a GoFundMe to help him train through the world championships selection process later this year. Mediation with athletes abused by former national team doctor Larry Nassar drags nearly three years after USA Gymnastics filed for bankruptcy in an effort to get all of the cases put under one umbrella.

Perhaps the most symbolic moment for the organization came not on the medal stand but after Biles realized she wasn't quite right when she bailed out of her first vault during the team final. Shaken, she consulted with Dr. Marcia Faustin before exiting the competition. She later praised Faustin's support for helping her navigate such a difficult ordeal.

For a national governing body trying to re-establish trust, it's a very small but potentially very important start.

U.S. and IOC officials then made sure Biles had everything she needed from a medical and physical standpoint to clear the way for her return to the floor during the final day of competition, where she won a seventh Olympic medal by claiming bronze on balance beam.

Afterward she expressed relief and gratitude about everything else. It's far too early to make any firm decisions about 2024, though Biles is keeping the door open.

So is Lee, who is intent on becoming the first American Olympic all-around champion to compete collegiately. Her five predecessors -- Biles included -- all turned professional to cash in on their success rather that accept a college scholarship. Lee doesn't have to choose thanks to recently passed legislation that will allow her to profit by having businesses use her name, image and likeness.

As her sport's newest star, she will likely be in demand the second her plane lands back home in Minnesota. That will likely follow her to Auburn, where she'll have to juggle her newfound fame, a course load and attempting to maintain most of her elite skills while abiding by NCAA rules that will limit her to 20 hours of training a week.

It's a lot to take on. Not just for Lee but Chiles (UCLA), McCallum (Utah) and Carey (Oregon State), too. Skinner, who starred at Utah for three years before returning to elite competition in 2019, can't say for certain what's going to happen at the top level of USA Gymnastics.

The college game? Skinner expects it to be lit.

"So I think it's going to be really cool to see kind of how this changes, you know, college gymnastics and seeing all these Olympians go out," Skinner said. "I think it's frickin awesome." 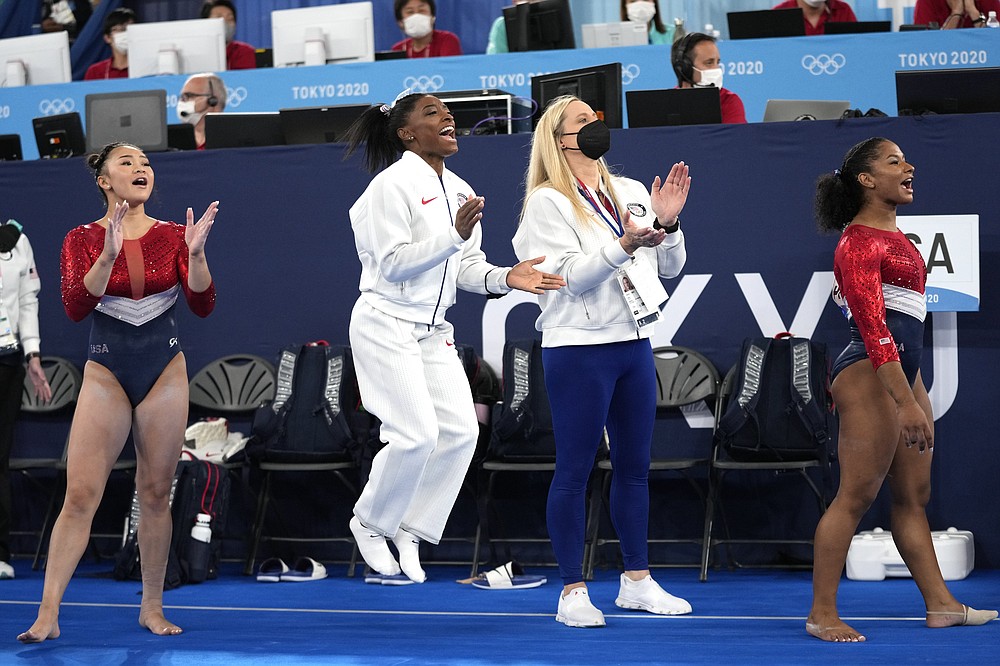 FILE - In this July 27m 2021 file photos, gymnasts from the United States, Simone Biles, center, Jordan Chiles , right, and Sunisa Lee cheer Grace McCallum as she performs on the floor during the artistic gymnastics women's final at the 2020 Summer Olympics, in Tokyo. Biles and Naomi Osaka are prominent young Black women under the pressure of a global Olympic spotlight that few human beings ever face. But being a young Black woman -- which, in American life, comes with its own built-in pressure to perform -- entails much more than meets the eye. (AP Photo/Ashley Landis, File) 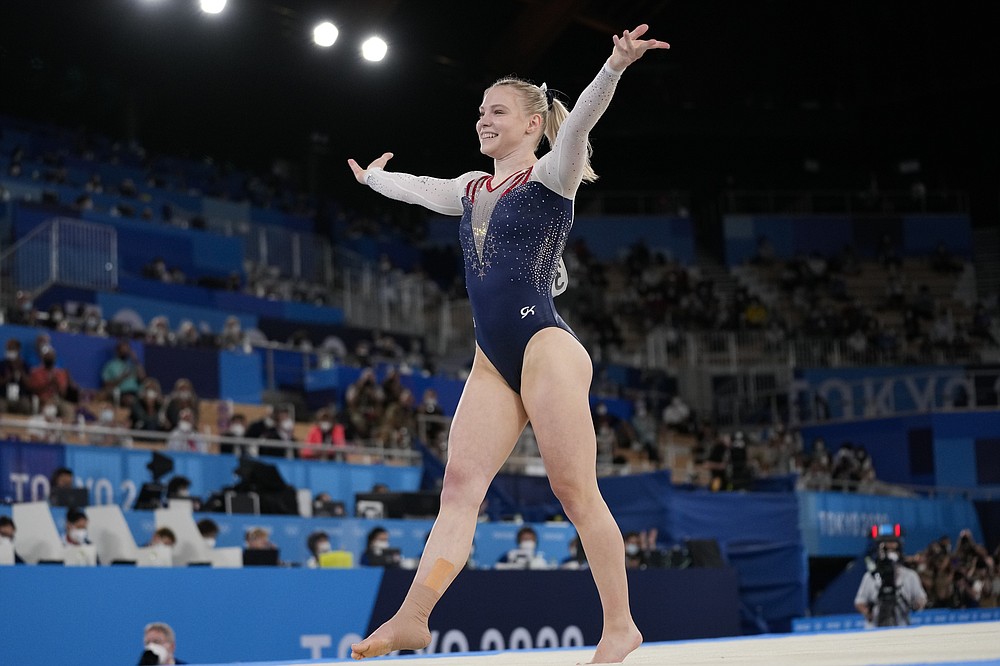 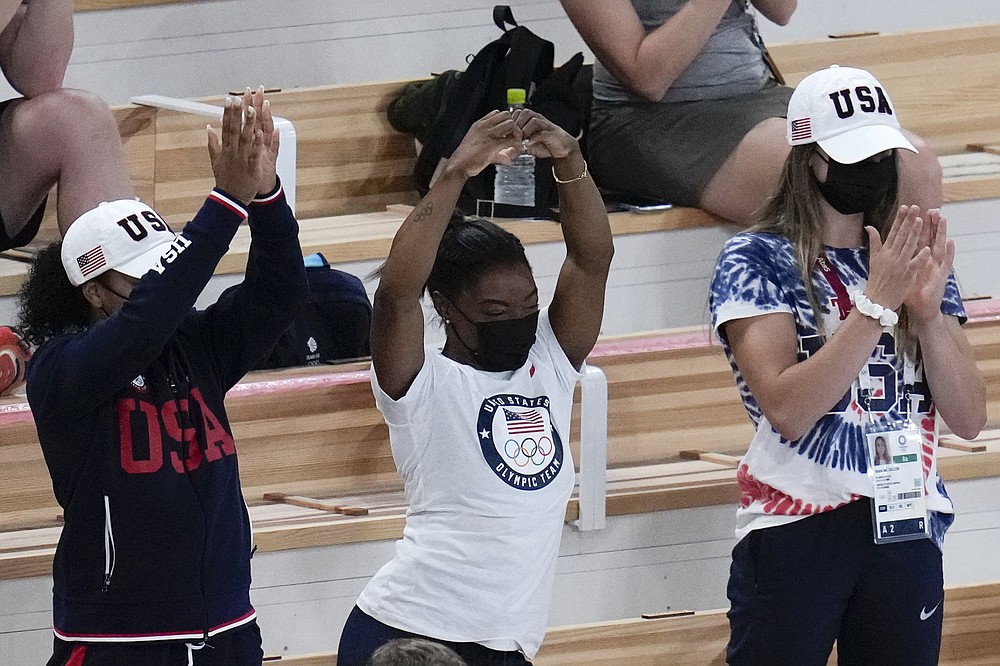 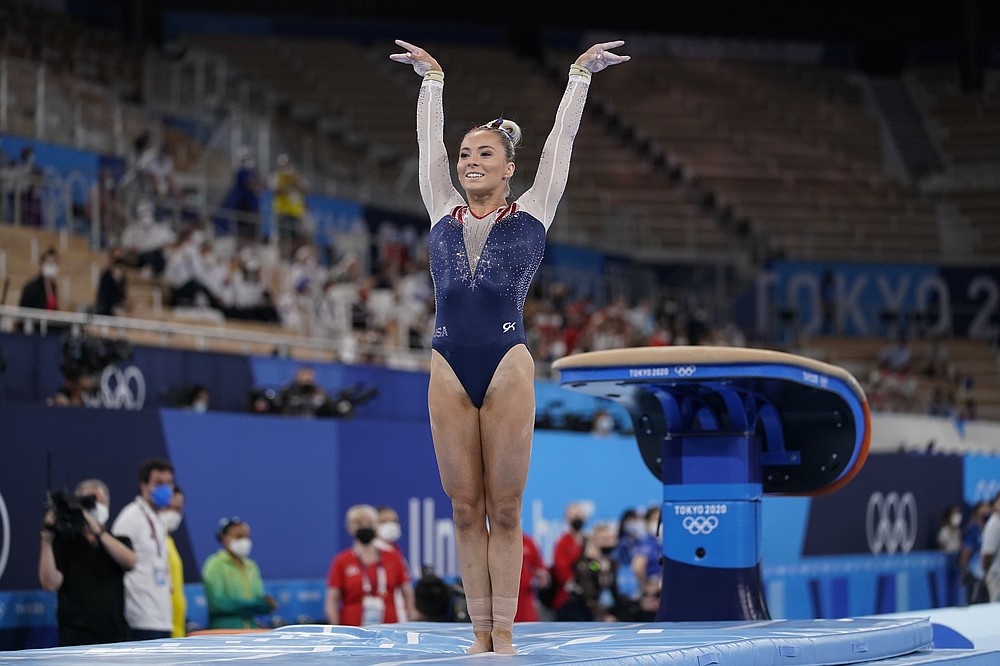 Mykayla Skinner of the United States, performs on the vault during the artistic gymnastics women's apparatus final at the 2020 Summer Olympics, Sunday, Aug. 1, 2021, in Tokyo, Japan. (AP Photo/Ashley Landis) 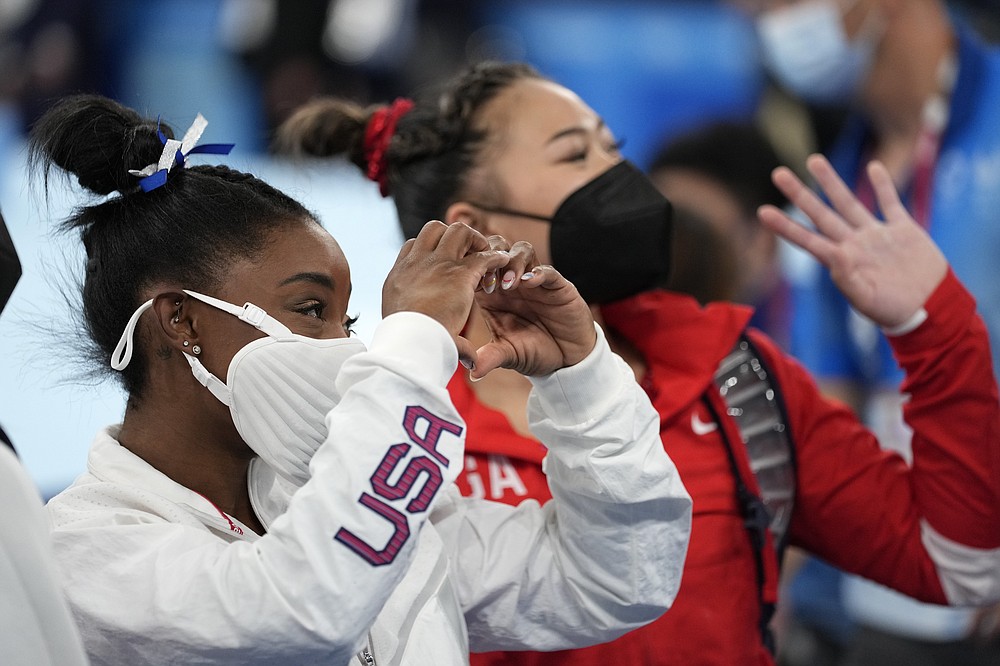 Simone Biles, of the United States, and teammates Sunisa Lee wave after performing on the balance beam during the artistic gymnastics women's apparatus final at the 2020 Summer Olympics, Tuesday, Aug. 3, 2021, in Tokyo, Japan. (AP Photo/Ashley Landis) 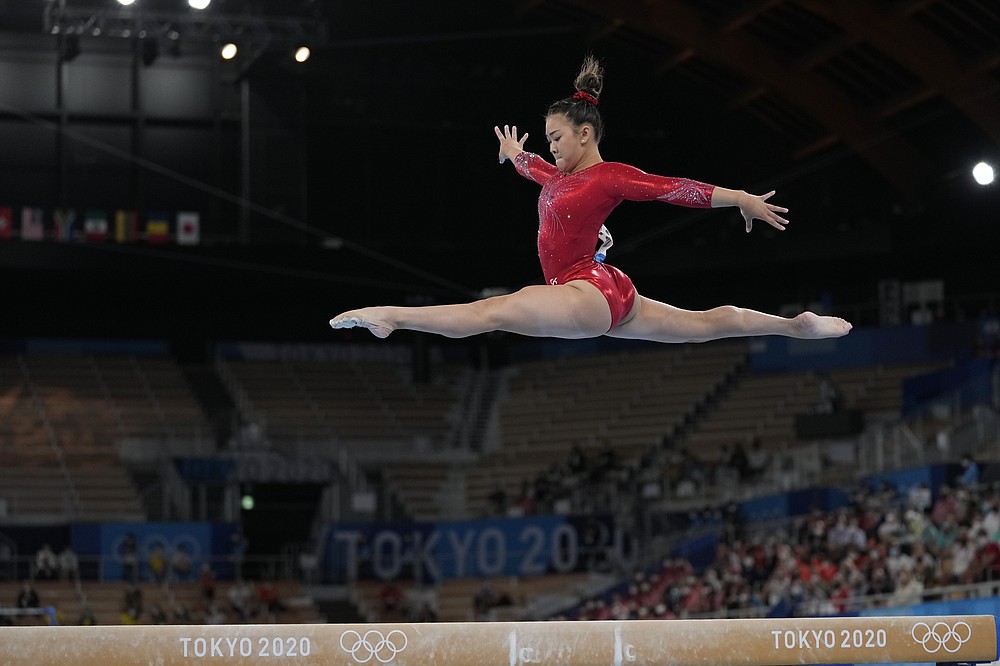 Sunisa Lee, of the United States, performs on the balance beam during the artistic gymnastics women's apparatus final at the 2020 Summer Olympics, Tuesday, Aug. 3, 2021, in Tokyo, Japan. (AP Photo/Ashley Landis)

Print Headline: US women show depth during stay in Tokyo