Guiding through: Ramirez blazes a new trail in Hot Springs 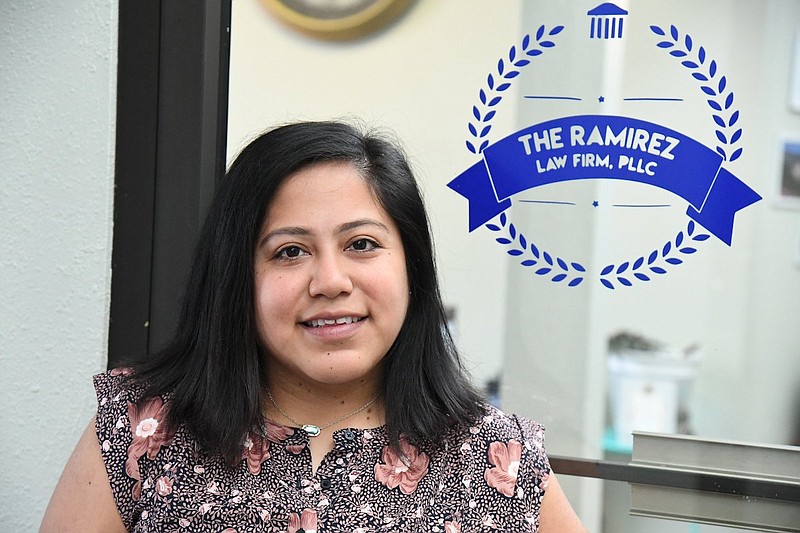 Attorney Miriam E. Ramirez stands at the front door of her office. Photo by Tanner Newton of The Sentinel-Record

"My parents are immigrants from Mexico and so growing up and obviously being exposed to that and seeing that kind of instilled in me a passion for that and an interest really, too," Ramirez said. "My law firm does immigration law and family law and so (my parents) have been a big influence and the reason why I chose my path."

Ramirez is originally from Benton, graduating from Benton High School in 2009. She went to Arkansas Tech from 2009 to 2013. From 2013 to 2016, she attended the University of Arkansas School of Law in Fayetteville.

"I did come home after law school for a bit, and I was trying to make a good business decision. Benton, honestly, wasn't working out too well, as far as clients and most of them come either from Little Rock or Hot Springs. So, I decided on a business decision to move to Hot Springs," Ramirez said.

Ramirez's other option was Little Rock; she wanted to stay close to home. She didn't want to go to Texas or go anywhere else.

Ramirez opened her law firm in 2018, and it has been open ever since.

"I've enjoyed it. I've loved it. I like the community. We just joined the Chamber of Commerce a few weeks ago, maybe a month ago now and so it's been great," Ramirez said.

Even though Ramirez did not go to school in Hot Springs, she calls it home. Her father is on staff at First Baptist Church.

"I've been going to church there ... I've known people in the community, but it's great to just be plugged in and come back home. Hot Springs is home for me, and I moved in 2016 to Hot Springs, and I've loved it," Ramirez said.

For Ramirez, starting her business has been challenging. She does have friends, other attorneys that have their law firm. If she has a question, they are there to help her or even fill in for her in court.

"I've had that support system, but I'm also in the face of learning things out on my own. I've made dumb business mistakes, but it comes with learning, and juggling being an attorney is stressful in itself," Ramirez said.

Owning a business, individuals will have to worry about staff members, paychecks, making sure payroll is met and people calling.

"It's a lot because even as an attorney, my plate is full, but much more on the business perspective getting phone calls, from people, which is great, and I love it, but it can be hard," Ramirez said.

The first couple of years, it took Ramirez until about the end of 2019 and early last year, that she finally started to feel comfortable and begin to find her groove and finally be able to breathe a little.

When Ramirez was living in Benton, she had employers that did general practice, which means they did everything such as wills, criminal law, bankruptcy, family law, civil suits, etc. That is when she realized that people need bilingual services in everything, not just law.

She said that there are good attorneys, bound by law and the ethical rules for lawyers.

She said that a lot of times, people go to attorneys during rough times in their life. They don't go because necessarily everything is fine and dandy.

Ramirez's drive is being a part of her clients' process, such as legal status, divorce, a single mother in need of child support, or cases where they want to adopt a child.

"Being a part of that journey with them sometimes I feel like I'm more than just the attorney, I'm a friend, I'm a therapist, I'm a big sister or a little sister, where I get to knock some sense into them or hold their hands through something. So being able to guide them through and being able to be a part of that is very awesome," Ramirez said.

"My client is going home today knowing that her green card application got approved, and so she now will have legal status, she will now get a Social Security number," Ramirez said.

The way that Ramirez likes to decompress is by watching Netflix, and during her free time, she hangs out with her friends.

She is currently taking up running. She decided to make a bucket list. One of the items on her bucket list is to run a half marathon because of COVID-19; it kept being pushed back.

"I'm set to run one hopefully in November, and I've been training for it. I run about six days a week, and that keeps me busy, and I really don't have time to do much else. ...," Ramirez said.

Ramirez is on the board of several organizations such as the Garland County Literacy Council, Ouachita Behavioral Health and Wellness, Cooperative Christian Ministries and Clinic and Arkansas Women's Hall of Fame.

"So that keeps me busy as well. Being a part of that. I try to be artistic but honestly, I wish I was more artistic. I played the piano; I haven't in a while. I love reading. I've slowly gotten into audiobooks. With my work, I drive a lot," Ramirez said.

Hot Springs was not where she wanted to be. She came because of business more than her desire and her love for the city.

"But, looking back, it's been one of the best decisions that I've ever made. I love Hot Springs, I love our city, I love our town. It's been great to be a part of it. Even though I didn't grow up here, even though I didn't go to any high school or anything, I still feel that this is my home; it's my home for a while because it's my business. I'm pretty much set here. So, I'm hoping to make an impact for the future because I'm going to be here for a while, so I might as well enjoy it and make it good for all of us," Ramirez said.

"I'm really thankful for all the government leaders in town and all the influential people in town. It's been great. I love it, and it has been five years now (since I have moved to Hot Springs), but it seems like I've been here forever. I'm very thankful for Hot Springs," she said.