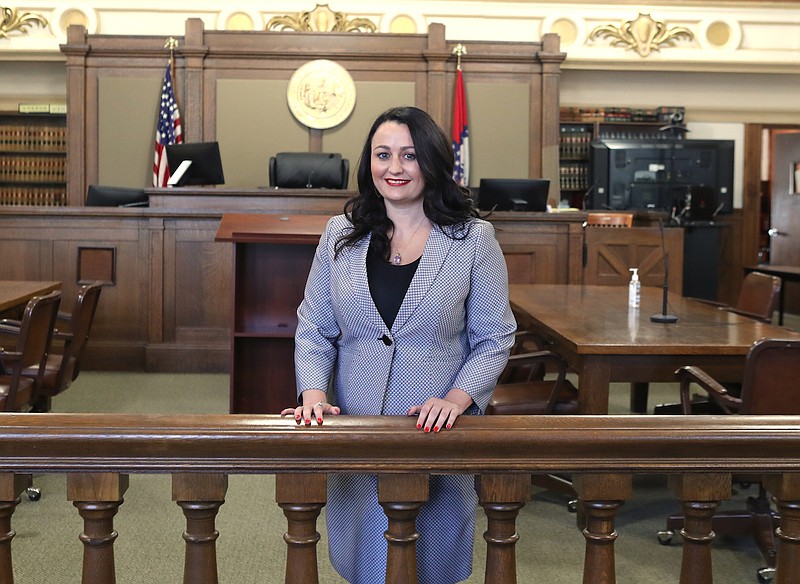 In her role as chief deputy prosecutor for Garland County, Kara Petro constantly faces the darker side of humanity, maneuvering through the often frustrating legal system to bring murderers, rapists and child abusers to justice.

Aside from the typical childhood aspirations of being a movie star and a period when she actually considered becoming a dentist, choosing a career as a lawyer and specifically a prosecutor was "always in my top three," Petro said.

"I've always had an analytical mindset and loved debating people, like in English class having comprehensive, spirited debates about what the literature meant," she said. "Being the youngest of six (siblings) I can certainly argue. I was always drawn to the law because of that; being able to play Devil's Advocate and argue either side and to take a case file and break it down and assess it, all goes back to my English background."

A native of Pennsylvania, Petro, her two older brothers and an older sister moved with their mother to her hometown of Hot Springs after their parents divorced when Petro was still a toddler. Her mother soon married prominent horse trainer, Terry Brennan, which gave her two older stepsisters and allowed her to grow up on a thoroughbred racehorse farm in Pearcy.

"I still go there all the time," Petro said. "I ride horses and have my own horse, Tiger Lily, a retired racehorse. She has great breeding, but I didn't want her to be a broodmare. She's just my riding horse."

Petro attended Lake Hamilton schools from kindergarten through graduation, "doing all the fun, extracurricular activities" like being a cheerleader and in the Steppin' Wolves, and majored in English with a minor in political science at the University of Central Arkansas in Conway before going on to law school at the University of Arkansas in Fayetteville.

One of her brothers is a doctor and the other a dentist and she had considered "going into dentistry and going into practice with my brother but I cannot do math," she said, laughing. "I loved English and social studies and that sort of thing so my brain was always geared toward being an attorney. I loved true crime books, even as a kid."

After graduation, she moved back to Hot Springs and worked in private practice for about a year and a half, focusing on family law, but "really wanted to be a prosecutor." When former Garland County Prosecutor Steve Oliver retired, it created an opening in the office for a deputy prosecutor and "they reached out to me," she said, and she began working there in January 2015.

Petro took over as chief deputy prosecutor in the spring of 2019 after her predecessor Joe Graham got elected as Garland County District Court judge. Prosecutor Michelle Lawrence "didn't immediately make a decision. We went without one for a while," she said, noting her selection "just kind of fit with what was going on in the office."

While dealing with homicides, rapes and child abuse can be difficult, Petro said those were the cases she was always drawn to as a prosecutor from the beginning, especially the ones with children.

"There's not a more true victim than a child," she said. "Every victim is important, but children just have a special place in my heart. It can be hard on me emotionally to do the child cases but they are by far the most rewarding, to be able to change a child's life. You don't want to fail the child because you feel like everyone else has already failed them."

By the time an attorney prepares a child to testify in front of a jury, "you've really bonded with them," she said. "You just want to protect them and not let them down. There's nothing more high stakes than that to me, not even homicides."

Petro admitted she has a tendency "to get too attached which takes a toll on me," but the reward of seeing the child end up in a good home and "they're so happy" makes it all worth it.

"It's important to do self-care and carve out time with your family and friends because you can get emotionally worn out. It can be really tough on you if you don't forge relationships that kind of pull you out of it and ground you," she said.

With the rape cases, "I just think that's so heinous," Petro said. "It's such a violent crime and you want to help that person rebuild their life and get justice and make sure other people aren't victims too because that always seems to be a crime that gets repeated. Once someone rapes somebody, I think they will continue to engage in that conduct with other victims until someone stops them."

One of Petro's proudest moments as a prosecutor was when a rapist she convicted was given a life sentence by the jury.

"It was a cold case. The victim didn't know him. It was a total stranger and she had to go years just wondering who this person was, who was still out and about, that had crawled in her bedroom window and raped her," she said, noting it wasn't until the offender raped someone else and they got a DNA hit before the case was solved.

"Finally getting justice for her was huge to me," she said. "That one for sure stands out."

Another rape case involving a juvenile under the age of 14 was memorable "just because it was so tragic. Being able to get her out of that environment and giving her a chance for a new life was so important to me."

Petro has also tried numerous homicide cases, which "is like putting together a huge puzzle and you don't have all the pieces," she said. "It's so interesting because you never really know what happened, but you can come as close as you can and just try to solve it. It requires a tremendous amount of preparation in putting the pieces together to show the jury what happened and to find all the flaws in the case before the defense attorney does. It's so intricate."

One case that stands out for Petro involved the homicide of a high school classmate which "was the first murder case I tried I think, maybe the second." She noted she and the victim "were not necessarily best friends, but we had a lot of mutual friends and grew up together and had lots of conversations over the years."

The case was "almost a vengeance deal" where the two accused "kicked in the door of her apartment and started shooting," killing her classmate while one bullet struck the victim's baby, who later recovered.

"For me to handle that homicide was very important to me and for me to get justice for her and her family. She was a wonderful person and did not deserve that. That case set into motion me wanting to do other homicide cases," she said.

Asked what she loves about her job, Petro said, "There's never a dull moment. I get the craziest phone calls and there's always something going on that's exciting or challenging. I love taking care of people and especially love doing it here in the community I grew up in. I just want to protect everybody and make sure they stay safe."

The downside of her job? "I hate the homework," she said. "I can't believe I picked a job where I still have homework. All the research. I can argue all day and love doing jury trials; it's fun and exciting, but nobody likes the prep part."

Asked what she would change about the law if she had the power, Petro didn't hesitate. "I would get rid of the whole parole eligibility deal. Just make a year be a year," she said. "That way the jury knows what they're doing. Parole eligibility is just so confusing. If the jury wants to only give someone a year in prison, that's fine."

She said under the current system, someone convicted of sexual assault and sentenced to 20 years in prison is eligible to have their sentence cut after serving a third of it and then "if they get all their good time, they're a great prisoner, it gets cut again by a sixth. The best way to figure it for someone who's mathematically challenged like me is they basically serve two months for every year of their sentence."

"If you shoot someone and are convicted of battery first, it's a half and a fourth, so if you were sentenced to 20 years you could be parole eligible in five years, even after shooting somebody. It can be alarming and frustrating. I would like to see that changed, especially when you have a child victim," Petro said.

With Petro's job, there's no such thing as an average day. "That's what makes it great," she said. "You never know. Depending on whether I have a trial or not will dictate a lot of my week. I'm going to court and dealing with that, but I also have to deal with search warrants and questions that come up. Agencies calling about some case that's going on and how it should be charged or whether a search warrant is appropriate or not."

She said her duties sometimes extend into the night as situations arise. "I'm never really off call, but I'm passionate about it and I enjoy it. I'm a little bit of a workaholic, I guess, but there's never a dull moment."