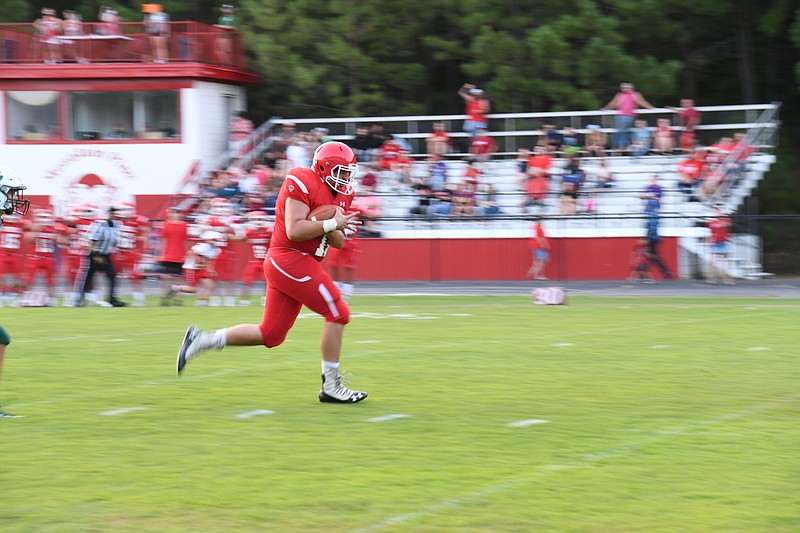 The Red Devils, last year's eight-man football state champions, hosted the Wildcats in their season opener with hopes of avenging its close 64-52 loss to Episcopal in last season's opener -- the team's only loss of the season. While the Red Devils managed to score on their opening possession to get on the board first, Episcopal Collegiate's running game, led by seniors Wesley Wright and Lance Viscioni-Wilson, proved too hard to stop all night.

"We had some conditioning (issues) ... it was a hot night," said Counce. "I'm not sure the hot night really affected it as much as just not being ready to play. I think the mental part of it that we missed in those two weeks probably hurt us more than the physical part right now. I feel like we could have played better and, you know, that's my job, and I'm not sure they were ready to play."

While the entire team being sidelined for two weeks just before the season certainly did not play into their favor Friday night, the Red Devils had their work cut out for them in stopping a powerful, experienced Wildcat offense.

"We played a good team, for one thing," Counce said. "And they were better than I thought they were. Hey, and I'm glad. Hey, I'm going to take this loss and learn from it, and my kids are going to learn from it, too. I just, I give all the credit to Episcopal. They did a good job. They never lined up wide and tried to throw the ball around -- they just run right over us with their No. 5 (Wright), and we didn't have any answers for it. We just didn't play good enough on defense. We had -- I think we had one stop where they had to punt, and that wouldn't win many games."

Leading 22-12 after a competitive first half, Wildcats junior quarterback Gray Lee threw a strike across field to Viscioni-Wilson, who spun and broke his way 46 yards for a touchdown and 30-12 lead following the conversion.

Mountain Pine's powerful running back trio in juniors Isaiah Miles, Keelan Dobbins and Dayjon Matlock answered with several large pickups on the ensuing drive, Matlock capping the drive with a 15-yard score to cut the deficit to 12 after the failed conversion.

The Red Devils had just one successful 2-point conversion on the night, which came from sophomore quarterback Jonah Wilburn with 2:33 remaining in the third quarter. The conversion followed Wilburn's pass up the middle to Miles cut the spread to 38-26.

Episcopal Collegiate held Mountain Pine in the fourth while Wright ran one in from 30 yards out and junior Jack Harbour set the final by punching in another at the 5:46 mark.

The Red Devils opened in high fashion when on the fifth play of the game, Wilburn surprised the Wildcat defense by hitting 6-3, 275-pound junior James Glasco downfield for a 38-yard gain just short of the goal line before Miles took it in for the first score of the game.

The Wildcats quickly regained their footing, responding with a Wright touchdown and then an onside kick recovery, which set up a 10-yard TD reception by senior receiver Layne Keck.

Episcopal head coach Michael Carter said that their kick recovery turned out to be huge in their overall success Friday night.

"It kind of turned the momentum into our favor," he said. "We got to go out and take a lead, and it was just huge. It executed very well -- unbelievable kick ... just, the poor kid -- it bounced right over his head right into our lap, which was good for us, not so good for them. But it was a really big turning point early in the game. They did come out, and they kind of went quick-pace on us, got a score, and then we kind of had to regroup. We went and scored, and then that onside kick really set us off."

Carter also gave credit to Wright and Viscioni-Wilson's performances on the night.

"They've been, since ninth grade -- they've been out here giving it their all, and their senior year, reaping the benefits ... hard work in the summertime in the weight room getting theirselves prepared, and it showed tonight," he said.

Counce was pleased with the quarterback play with Wilburn passing for 100 yards while gaining 44 on the ground before senior Brice Langley picked up several long gains late in the fourth quarter.

"You know, I feel a lot better tonight than I did yesterday," Counce said after the game. "You know, because I feel like Jonah come in and threw the ball well. I feel like he ran the offense well. And then when Brice came in finally in the second half and ran hard, I think we can grow off of that. I think it gives us some ideas of what we can, and we'll have some weapons doing that with both of them if they'll both come in and play hard. I feel like we'll be fine right there."

Wright finished with 260 yards rushing for Episcopal while Viscioni-Wilson had 85 receiving yards. Lee added 95 rushing and 85 passing while Harbour had 30 yards rushing.

The Red Devils travel to Marshall next week to play the Bobcats while Episcopal has a bye week and will host Marshall on Sept. 10.

Episcopal also took the win in the junior high match, shutting out the junior Red Devils 14-0.