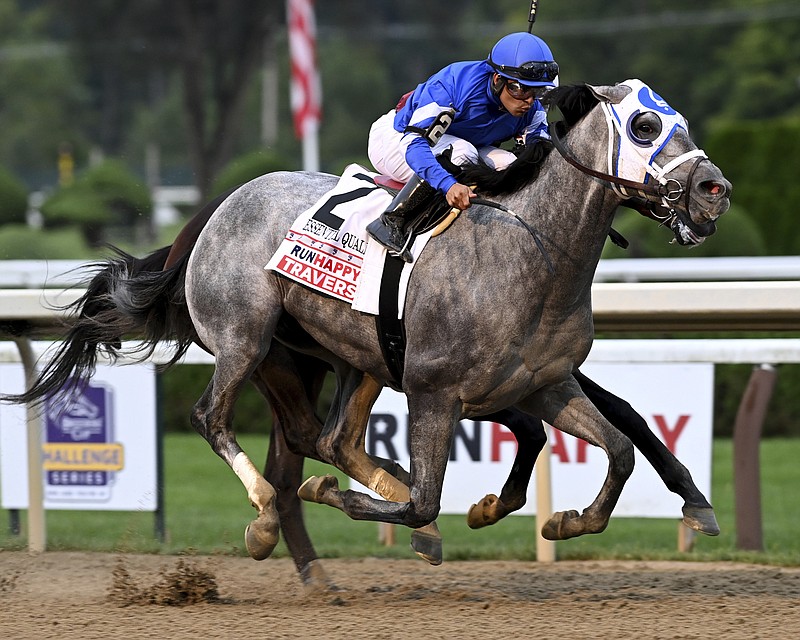 Knicks Go is ranked first and Essential Quality third in the newest National Thoroughbred Racing Association poll. Knicks Go, a 2020 Oaklawn allowance winner, is targeting the Grade 3 Lukas Classic Oct. 3 at Churchill Downs as his last prep for the Classic. Cox said he is unsure about Essential Quality's next start before the Tapit colt takes on older horses in the Classic, which like the Travers is 10 furlongs.

"We'll just let the dust settle and enjoy the victory for a little bit. I think that's the right thing to do," Cox said. "We'll make a decision in a week or two weeks. The most important thing is watching him and how he trains."

Winning the Travers by a neck over Midnight Bourbon, giving him an 8-0-1 record from nine starts, Essential Quality scored his fourth Grade 1 victory and pushed his earnings past $4 million. Winning at 10 furlongs, he improved on a fourth-place finish in the Grade 1 Kentucky Derby. Sitting out the Preakness, Essential Quality gave Cox his first Triple Crown victory in the Belmont Stakes June 5.

A Godolphin homebred, Essential Quality became the first champion 2-year-old to win the Travers since Street Sense in 2007 and joined Tiz the Law (2020), Summer Bird (2009), Birdstone (2004), Point Given (2001), Lemon Drop Kid (1999) and Thunder Gulch (1995) as horses to sweep the Belmont Stakes and Travers. Go back to 1969, and Horse of the Year Arts and Letters, to find the last to package Belmont, Grade 2 Jim Dandy and Travers victories.

"Horses like Hot Rod Charlie, Midnight Bourbon, Jackie's Warrior and Keepmeinmind were all good horses that played a role as 2-year-olds last year and have been able to continue on at 3," he said. "Jackie's Warrior and Essential Quality were both dual Grade 1 winners at 2 and 3. It means a lot. Hopefully, we can keep marching forward and on to the Breeders Cup."

Midnight Bourbon, the highest-ranking Kentucky Derby starter (sixth) entered besides the winner, opened daylight down the backstretch under Ricardo Santana Jr. Essential Quality closed the gap on the final turn and surged ahead in the stretch, though challenged to the wire by Midnight Bourbon in what Asmussen assistant Scott Blasi called "by far the best race of his career."

"We were a little bit unlucky to lose but that horse (Essential Quality) is a champion," Blasi said. "Once that horse gets by you, he's not going to let anybody pass him, and he proved that time and again."

Said trainer Robertino Diodoro: "I think that's why Essential Quality had such a tough time getting by Midnight Bourbon down the lane; he walked everyone to sleep."