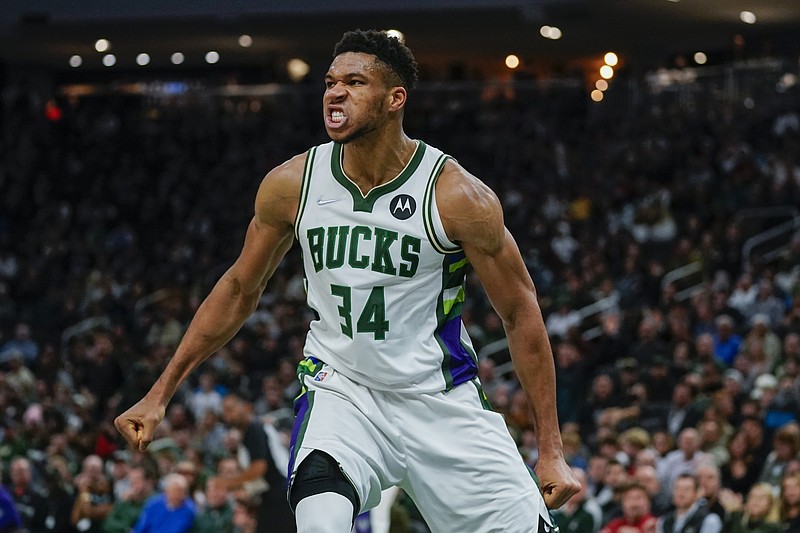 Milwaukee Bucks' Giannis Antetokounmpo reacts during the second half of an NBA game against the Charlotte Hornets Wednesday in Milwaukee. The Bucks won 127-125. - Photo by Morry Gash of The Associated Press

MILWAUKEE -- Giannis Antetokounmpo scored on a driving layup with two seconds left to give Milwaukee a 127-125 victory over the Charlotte Hornets on Wednesday night, the Bucks' eighth consecutive victory.

Antetokounmpo had 40 points and 12 rebounds and Khris Middleton added 21 points for the Bucks.

LaMelo Ball had a career-high 36 points for the Hornets, followed by Kelly Oubre Jr. with 25 and Miles Bridges with 22 points.

Middleton buried a 3-pointer from the top left to put Milwaukee in front 123-122 with 52 seconds left. Antetokounmpo's lay-in on the Bucks' next possession was negated by an offensive foul.

Gordon Hayward missed a jumper from the top of the key for the Hornets, and Middleton hit two free throws to make it 125-122 with 8.6 seconds remaining.

Ball made a fadeaway 3-pointer -- his eighth of the game -- with 5.9 seconds left to pull the Hornets even at 125. After a timeout, Jru Holliday fed Antetokounmpo near the top of the lane for the left-side layup.

BOSTON -- Jayson Tatum scored 26 points with a career-high 16 rebounds, shaking off a hard fourth-quarter fall to lead to lead Boston over Philadelphia.

Tatum scored 11 points in the fourth. Robert Williams III blocked Georges Niang's shot at the buzzer to give the Celtics the victory.

It was their first game this season against their longtime Eastern Conference rivals and former coach Doc Rivers.

Joel Embiid had 18 rebounds for Philadelphia, adding 13 points on 3 for 17 shooting. Seth Curry had 17 points and Shake Milton came off the bench to score 16.

The Magic took their first lead of the night at 106-103 when rookie Franz Wagner drilled a step-back 3-pointer with 1:45 to play.

The Magic's rally ruined the return of Nuggets' forward Aaron Gordon, who played at the Amway Center for the first time since Orlando traded him to Denver on March 28. Gordon scored 17 points, grabbed eight rebounds and had three thunderous dunks.

Anthony, who returned after missing the previous six games with an ankle injury, had his ninth 20-point game and chipped in eight rebounds and seven assists.

Monte Morris scored a season-best 22 points, while Nikola Jokic had 18 points, 15 rebounds and seven assists for the Nuggets.

INDIANAPOLIS -- Trae Young made two crucial free throws in the final seconds of the game to help Atlanta fend off Indiana.

Pacers rookie Chris Duarte came up with a steal late in the game, but was unable to convert a contested layup. Young was fouled and made the final two of his 33 points. Young also had 10 assists and eight rebounds for the Hawks.

NEW ORLEANS -- Luka Doncic scored 18 of his team-high 28 points in the first quarter and dished out 14 assists in 27 minutes to power Dallas over New Orleans.

Doncic went 7 of 8 from the floor in the Mavericks' 41-point first quarter -- their highest-scoring period of the season in which they shot 73% from the floor (16 of 22).

Kristaps Porzingis added 20 points and 10 rebounds for Dallas, which had lost five of its previous six games.

New Orleans, which entered having won three of their last four games, was paced by Brandon Ingram with 29 points.

Richaun Holmes had 16 points and 11 rebounds as the Kings snapped a two-game skid and improved to 3-3 under interim coach Alvin Gentry after a 6-11 start that led to Luke Walton's firing last month.

Paul George sat out to rest for the Clippers. Sacramento had little trouble with Los Angeles' role players early on, jumping to a 20-point lead early in both halves and never trailing, but five Clippers reserves led a 14-0 rally to trim Sacramento's lead to eight points with 1:28 to play. Fox hit a clinching layup in the final minute.

Luke Kennard and Terance Mann both scored 19 points for the Clippers and Ivica Zubac added 17 points and seven rebounds.

The Rockets won their fourth straight and the Thunder dropped their seventh in a row. Oklahoma City led 81-73 at the end of three quarters before Houston started chipping away behind Tate and Armoni Brooks, who had 18 points on 7-of-10 shooting.

Timberwolves star Karl-Anthony Towns had to leave the game with 2:14 remaining after injuring himself on a dunk.

Towns scored only two of his 34 points in the final period -- and that was when he got free along the baseline for a dunk. After slamming the ball through, his momentum caused his body to fall horizontally and he appeared to land on his tailbone.

Daniel Gafford had 18 points and 10 rebounds for the Wizards, who were back home after a four-game road trip.

Jarrett Allen added 19 points and 11 rebounds and Darius Garland finished with 16 points for the Cavaliers, who had not won on the Heat's home court since Jan. 25, 2010. The Cavaliers also got a double-double from Evan Mobley with his 17-point, 11-rebound outing.

Tyler Herro scored 21 points for Miami. Dewayne Dedmon started at center in place of Bam Adebayo, who learned Wednesday that he's likely out until at least mid-January with a torn right-thumb ligament.

Print Headline: Bucks pick up 8th win in a row behind Giannis' 40 points