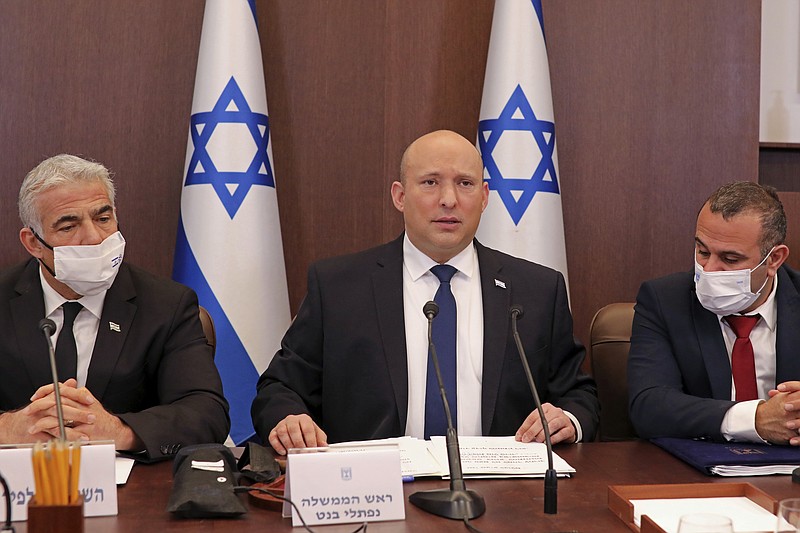 Israeli Prime Minister Naftali Bennett, center, chairs a weekly cabinet meeting, at the prime minister's office in Jerusalem, Sunday, Dec. 5, 2021. Bennett on Sunday urged world powers to take a hard line against Iran in negotiations to curb the country's nuclear program, as his top defense and intelligence officials headed to Washington amid the flailing talks. (Gil Cohen-Magen/Pool via AP)

JERUSALEM (AP) -- The long-delayed resumption of nuclear talks with Iran has gotten off to a rough start -- with Iran digging in and its negotiating partners openly voicing frustration and pessimism.

After five days of talks in Vienna ended last week, the United States said Iran did not appear to be serious. European diplomats accused Iran of backtracking on previous promises. Even Russia, which has stronger relations with Iran, questioned Iran's commitment to the process. Israel, an outside observer with a stake in the outcome of the talks, has ramped up its rhetoric and is dispatching two top security officials to Washington for consultations.

"I call on every country negotiating with Iran in Vienna to take a strong line and make it clear to Iran that they cannot enrich uranium and negotiate at the same time," Prime Minister Naftali Bennett said Sunday. "Iran must begin to pay a price for its violations."

Perhaps the most encouraging outcome of last week's talks was an agreement to continue talking. When negotiators reconvene in coming days, it could become clearer if the wide gaps visible last week were a sign of posturing or a serious crisis.

The negotiations seek to revive the 2015 nuclear accord between Iran and six world powers. That agreement, spearheaded by President Barack Obama, granted Iran relief from crippling sanctions in exchange for curbs on its nuclear program.

But three years later, President Donald Trump, with strong encouragement from then-Israeli Prime Minister Benjamin Netanyahu, withdrew from the deal, causing it to unravel. Since then, Iran has stepped up its nuclear activities -- amassing a stockpile of highly-enriched uranium that goes well beyond the bounds of the accord.

Iran last week took a hard stance, suggesting everything discussed in previous rounds of diplomacy could be renegotiated. In the midst of the negotiations, the U.N.'s nuclear watchdog confirmed Iran had begun enriching uranium up to 20 percent purity at its underground facility at Fordo -- a site where enrichment is not permitted under the deal.

Despite Iran's claims its nuclear activities are for peaceful purposes only, the continued advances in its atomic program have further raised the stakes.

Last week's talks in Vienna came after a hiatus of more than five months and were the first in which Iran's new hard-line government participated. The United States, no longer a party to the agreement, was not in the room and negotiated remotely through mediators.

A senior U.S. State Department official said over the weekend negotiators had expected Iran to "show seriousness" at the talks. He said even Russia and China, important trading outlets for Iran that have traditionally taken a softer line, were concerned about the prospects for a deal.

"Every day that goes by is a day where we come closer to the conclusion that they don't have in mind a return" to the deal, said the official, who spoke on condition of anonymity to brief reporters on the U.S. assessment.

"Unclear how these new gaps can be closed in a realistic time frame on the basis of Iranian drafts," they said.

"Technically, amendments are always possible," he said. "However, it is desirable that such amendments ... do not turn into a roadblock to progress."

On Sunday, Iran's Foreign Ministry issued a nine-page document that appeared to slightly step back from its tough positions.

"Other parties only need to show political determination and express readiness to take necessary practical steps," the document read. "Then, ways will be opened for the conclusion of a deal and settlement of differences."

But the document gave few specifics on what Iran might have in mind.

That is unlikely to satisfy Israel, which has returned to its role as possible spoiler.

Israel considers Iran to be its greatest enemy and it strongly opposed the 2015 deal.

It said it wants an improved deal that places tighter restrictions on Iran's nuclear program and addresses Iran's long-range missile program and its support for hostile proxies along Israel's borders.

Israel also said the negotiations must be accompanied by a "credible" military threat to ensure Iran does not delay indefinitely.

Bennett said Israel was using the time between rounds to persuade the Americans to "use a different toolkit" against Iran's nuclear program, without elaborating.

The head of Israel's Mossad intelligence service, David Barnea, was traveling to Washington on Sunday, and Israeli Defense Minister Benny Gantz, a former military chief, heads there later this week.

"If the international community does not take a vigorous stance on this issue, Israel will do so. Israel will protect itself," Herzog said.

Despite Israel's support for Trump's withdrawal in 2018, prominent voices in the country are now saying in retrospect the move was a blunder.

Former Prime Minister Ehud Barak wrote in the Yediot Ahronot daily Sunday pulling out "was a delusional decision that allowed the Iranians to move forward quickly in the direction of becoming a nuclear threshold state."

Barak, who reportedly favored a military strike when he served as Netanyahu's defense minister early last decade, said Netanyahu, who is now Israel's opposition leader, had failed to put together with the U.S. a "Plan B in the form of a surgical military operation."

Over the past decade, Iran has greatly complicated any military operation by scattering its nuclear sites and hiding some deep underground. Israeli officials insist military action is still feasible.

Yoel Guzansky, a senior fellow and Iran expert at Israel's Institute for National Security Studies, said the Israeli threats should be taken seriously, especially in light of questions over America's willingness to use force in the region.

"I think the United States doesn't understand our red lines," he said. "They think we're bluffing, but we're not."

Over the weekend, Iran said it had tested a surface-to-air missile defense system near its Natanz nuclear facility. Late Saturday, people leaving nearby saw a light in the sky and heard a loud explosion.

"Any threat from the enemies will be met with a decisive and firm response," state TV quoted Lt. Cmdr. Ali Moazeni as saying. 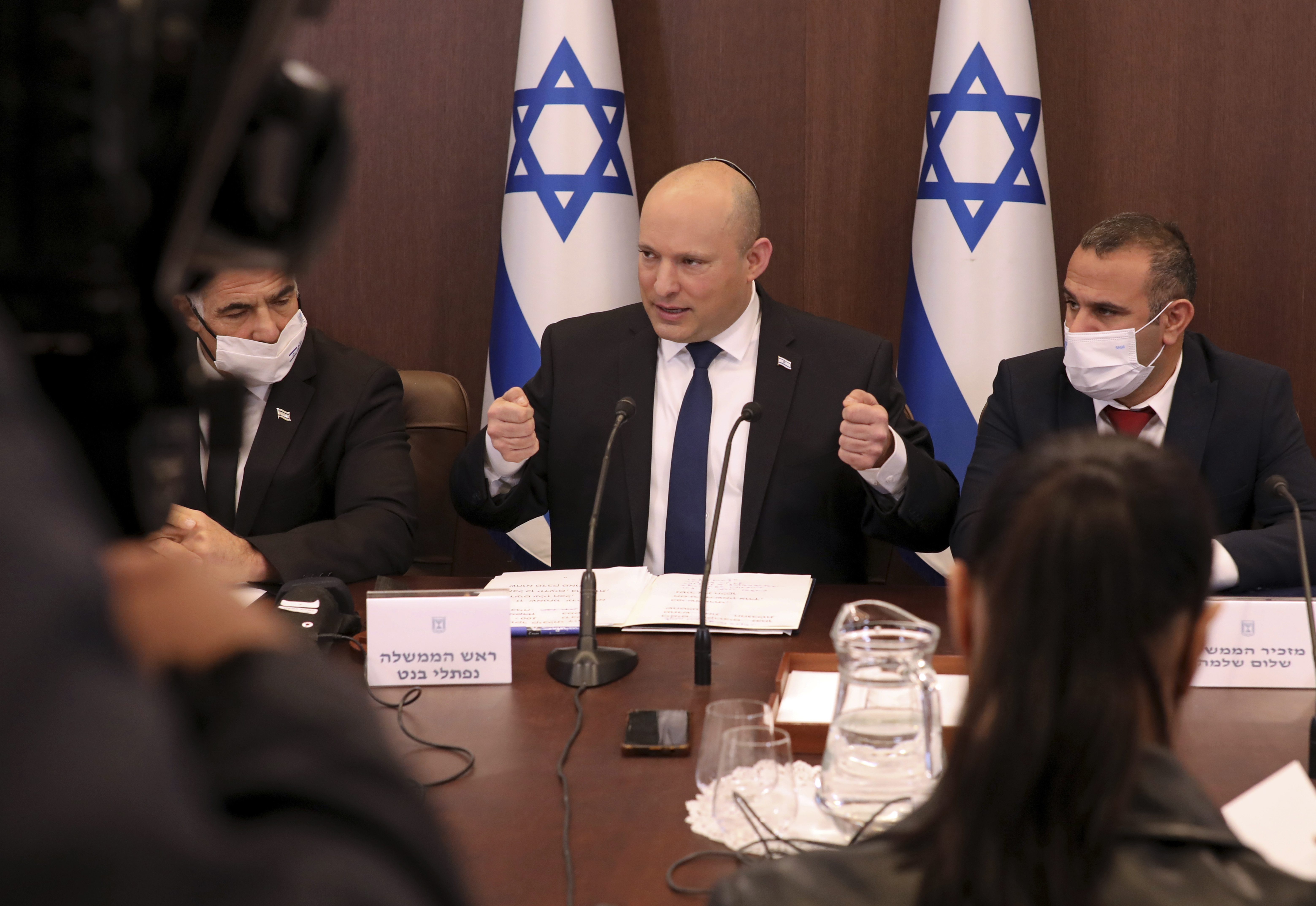 Israeli Prime Minister Naftali Bennett, center, chairs a weekly cabinet meeting, at the prime minister's office in Jerusalem, Sunday, Dec. 5, 2021. Bennett on Sunday urged world powers to take a hard line against Iran in negotiations to curb the country's nuclear program, as his top defense and intelligence officials headed to Washington amid the flailing talks. (Gil Cohen-Magen/Pool via AP) 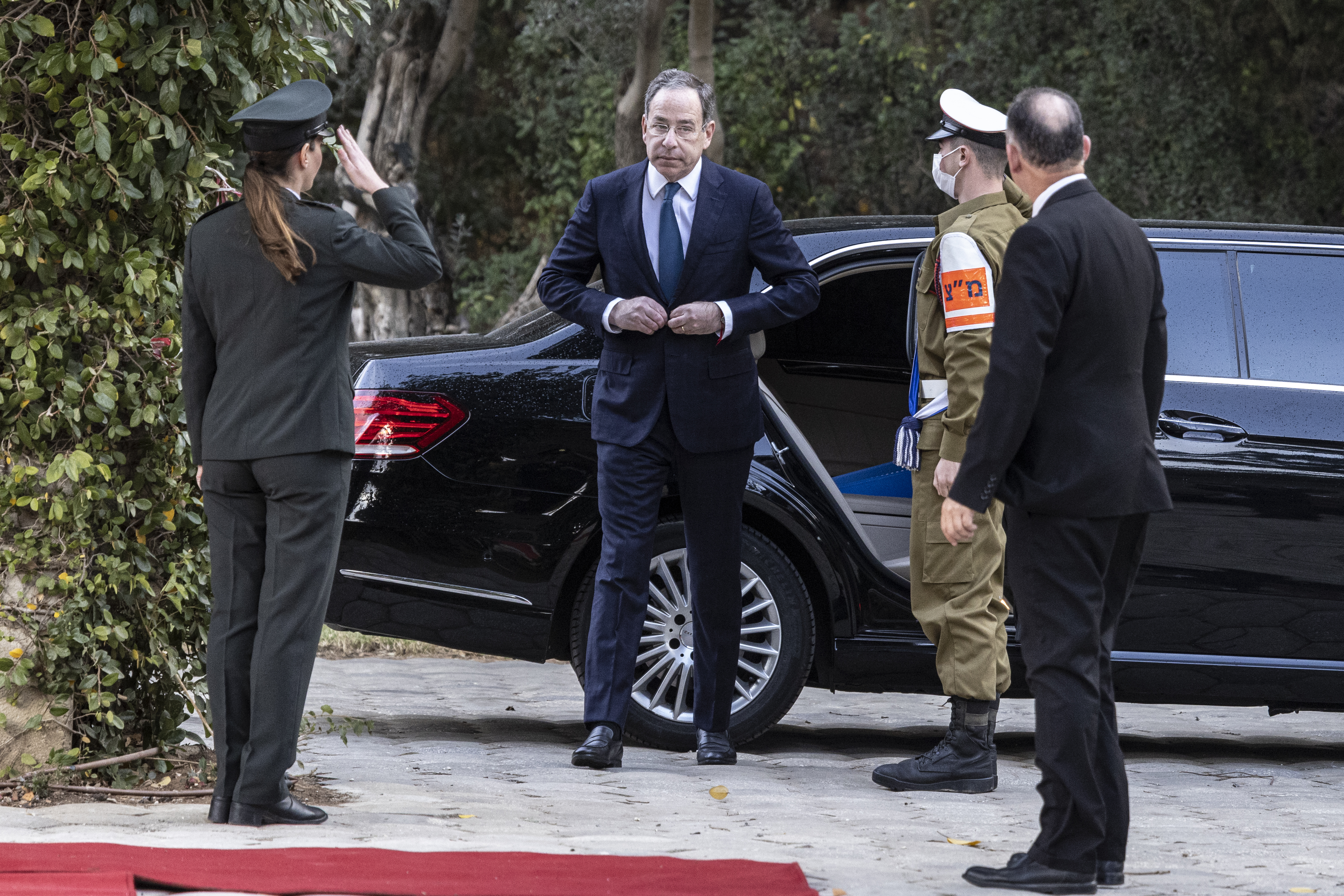