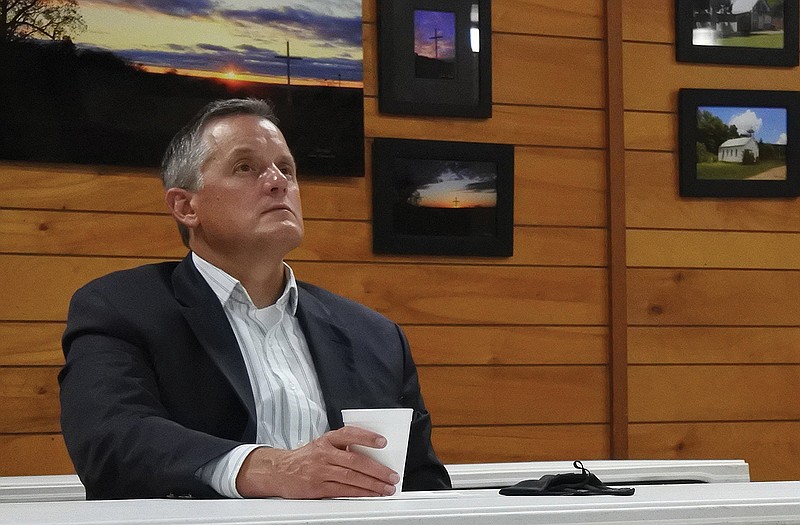 U.S. Rep. Bruce Westerman listens to a presentation at the Mulberry Community Center in this Aug. 31, 2020, file photo. - Photo by Arkansas Democrat-Gazette/Thomas Saccente

"I was thinking 'Number one, this is definitely not how I thought the day was going to go,' and 'How did this happen, where I'm by myself in the minority leader's office?'"

That's where U.S. Rep. Bruce Westerman, of Hot Springs, the Republican who represents Arkansas' 4th Congressional District, took shelter as a violent mob of Trump supporters invaded the Capitol on Wednesday in an attempt to overturn the results of the Nov. 3, 2020, election.

"It would be an understatement to say that Wednesday was looming large," Westerman said in an interview with The Sentinel-Record.

Earlier that day, the congressman was watching television coverage of President Trump's rally while in his office as he was getting ready to go on the House floor when he heard the president say that if Vice President Mike Pence did the right thing, "We win the election," referring to the president's repeated insistence that the vice president could and should decertify the election results.

"I thought, 'that's just, that's not right,'" said Westerman. "If Mike Pence does the right thing, he's going to open the electoral votes and follow the Constitution."

The Associated Press previously reported that "neither the Constitution nor congressional statute grants the vice president any such powers."

Westerman said he remembers hearing the president encourage his supporters to march to the Capitol before he made his way to the House chamber. He was talking with House Minority Leader Kevin McCarthy in the latter's office as the scene started to escalate outside.

Eventually, the mob breached the Capitol, and Westerman said McCarthy's security detail escorted the minority leader away, as he stayed back with McCarthy's staff, who were sheltering in place with Capitol Police.

He said he was watching TV in McCarthy's personal office when he went back out to check on McCarthy's staff in other offices, and suddenly realized the remaining staff and Capitol Police had left.

"So, I'm left in his office suite with nobody else and I thought 'Well I kinda missed the boat here on the evacuation thing, but I think I'll be OK just sitting here in the leader's office.'"

Westerman said he found himself looking for what could be used as a weapon if need be, and where he could secure himself.

Sometime later, he said Capitol Police in riot gear came in. Westerman heard over their radios that shots had been fired in near the House Chamber, close to where they were.

He said he could hear a commotion coming from the other side of the door, and as one officer opened it and rushed out, he could tell there was a confrontation. At that point, Westerman decided to hide in the McCarthy's half-bath, which he said had a solid lock.

"You could hear flash-bangs, you could hear tear-gas canisters, people had sticks that they were beating on doors and breaking windows and that sort of thing," he said.

The TV in the office was still on, so he could keep up with new developments, and know when it was safe to come out.

"I was in there, in the office, you know, in and out of the restroom there for about two and a half-hours," he said.

At one point, he heard voices approaching, and hid back in the bathroom.

"I distinctly remember hearing one woman say, 'Oh, this is a nice office,'" he said.

The group continued rummaging around McCarthy's office. Someone grabbed the doorknob to the bathroom and tried to twist, but Westerman said he had it locked. Eventually, the one group left, but another group showed up later on, again rummaging through the office and twisting the locked doorknob before leaving.

Despite everything, Westerman said he didn't feel like he was in danger. He said he was texting staff, and the police knew where he was and eventually made their way back, and escorted him away.

He called the violence "heartbreaking" and "unjustifiable."

"It's an attack on the very core of our country and our democracy for this to happen and I cannot denounce it enough, what these people did," he said.

Political leaders, both local and national, have used words ranging from "coup" to "insurrection," to describe the violence. When asked if he thought any of those terms apply, he said it was "definitely a riot."

"If anybody tries to claim it was, you know, the right to assemble and protest under the First Amendment, that's asinine to even say that," he said. "Definitely a riot. It was mob activity."

He's calling for investigations and charges for those involved.

"There has to be a strong message that this isn't the way we take care of problems in the United States of America," he said.

Westerman said it was "undeniable" that Trump had a role to play in inciting the crowd.

"I've already read some stuff that said his words were not a direct enough instruction, like he didn't tell people to go run into the Capitol. But, I mean, I think all that will come out in time. I just don't have enough information to say for sure, other than the fact that I know that crowd was being riled up by his words," he said, saying later there was nothing wrong with the president giving a political speech riling people up.

Westerman also pointed out that there were thousands and thousands of people who didn't storm the Capitol, and were just there to exercise their First Amendment rights.

House Speaker Nancy Pelosi and Democratic Senate Leader Chuck Schumer have "called on Vice President Mike Pence and the Cabinet to invoke the 25th Amendment to force Trump from office" and Democrats are considering impeachment on Monday, according to a report by The Associated Press.

When asked if he thought any of this is necessary or warranted, Westerman said the president put out a statement saying there would be a peaceful transition of power. He said invoking the 25th Amendment is "something that the vice president and the Cabinet would do; they're much closer to that situation and have much better information."

He said he doesn't know that an impeachment would be possible logistically, with the time remaining between now and the inauguration of President-elect Joe Biden. However, if impeachment were to happen, he said he would hear the arguments and look at the charges, and vote based on those.

Law enforcement response to the violence on Wednesday has been widely criticized, with lawmakers from both parties pledging to "investigate law enforcement's actions" and question whether a "lack of preparedness allowed a mob to occupy and vandalize the building," according to an Associated Press report.

As to the Capitol Police, Westerman said, "I can tell you, every one of them that I saw when all of this was going on were putting their life at risk. A lot of them were beaten and had to go to the hospital. So for the men and women on the Capitol Police force, I have nothing but the highest regard for them."

But for the Capitol Police leadership, Westerman said there needs to be very strong scrutiny. He said there does need to be an investigation to figure out how this happened and what can be done to keep it from happening again.

Law enforcement has drawn criticism for their handling of the rioters on Wednesday in comparison to the way Black Lives Matter protesters were handled over the summer. The Associated Press reported, in one instance last summer, that protesters were shot with tear gas for "seemingly no reason" in Lafayette Park before the president made his way to St. John's Church to deliver a speech.

Vice President-elect Kamala Harris wrote in a Tweet Thursday, "We have witnessed two systems of justice: one that let extremists storm the U.S. Capitol yesterday, and another that released tear gas on peaceful protesters last summer. It's simply unacceptable."

When asked if he saw a discrepancy between the way the two groups were treated, Westerman said there were different law enforcement jurisdictions at play, and that Capitol Police are separate from law enforcement agencies that dealt with BLM protesters over the summer. The website for the Capitol Police says "The USCP is responsible for protecting Congress and the public, and maintaining order while protecting the U.S. Capitol -- the seat of our nation's government." Westerman said the instances that happened last summer did not happen on Capitol grounds.

When asked in a follow-up question through email about whether he believes the Capitol Police's response would have been different to BLM protesters, Westerman's Communications Director Rebekah Hoshiko said "There definitely can be oversight into the actions of Capitol Police, but the congressman isn't going to speculate on how they would've treated other protesters differently. At the end of the day, we can't really know that for sure."

Westerman said the violence at the Capitol showed the need for good police officers, and that calls to defund the police were "one of the craziest things" that he had heard.

Westerman voted Wednesday to accept the electoral votes from Arizona and Pennsylvania and other disputed states. In a statement released on Thursday, he said, in part:

"The Constitution explicitly outlines that federal elections are state legislatures' responsibility, giving Congress a final check with a provision to object to electors. I've said all along that we should let our court system work, and I supported a variety of legal challenges to investigate election fraud allegations. However, I did not object to the final count of electors. Last night's failed votes in Congress did nothing to change the outcome of the Nov. 3 election, nor could they have changed it had they passed. As much as we may not like the results of an election, resorting to mob rule is wholly un-American. We can -- we must -- be better than this."

Westerman said the country is going to survive this and have to figure out how to do better.

"I caution people," he said. "Not everything you read on Facebook or Twitter is the truth. Read something other than that, and listen to people other than talk radio and cable news shows, and we've got to do a better job of understanding our history and understanding our Constitution and how it works. And it's up on all of us to do that, because we can't go outside this Constitution and expect that everything is going to be OK."