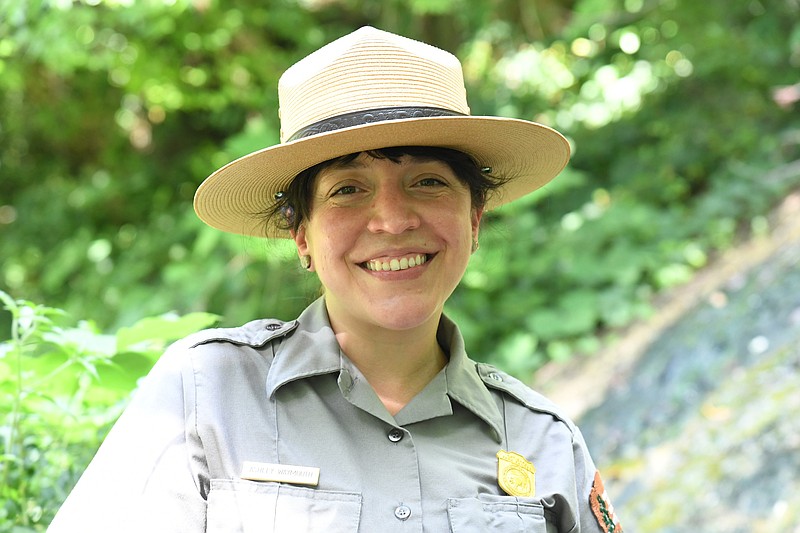 Ashley Waymouth, Hot Springs National Park Ranger, stands near the cascade next to Arlington Lawn. Photo by Tanner Newton of The Sentinel-Record

On March 4, Hot Springs National Park celebrated its centennial anniversary, a celebration that will span the entire year. Helping lead the celebration is anniversary coordinator and park ranger, Ashley Waymouth.

Waymouth joined HSNP in March 2020 to begin planning for the park's 100th year. She applied for the job in the fall of 2019.

"By a fortunate series of events, when I saw that Hot Springs National Park was looking for a centennial coordinator, I thought that I had a lot of experience and that fit that role and that this would be a great opportunity and like a lot of fun to plan a park's 100th birthday, so I applied and luckily I was selected," Waymouth said.

Originally from Laredo, Texas, Waymouth said that "For a lot of my life I have been" interested in nature. "As a little kid I never imagined that I would become a park ranger. For a long time I thought that I would actually go into law and become an environmental lawyer, but very quickly after perusing that path -- I took my LSATs -- it seemed that the more that I learned about nature, the more that I learned about the natural world, the sillier it felt to pursue law and I really wanted to learn as much as I could about the environment so I decided to pursue environmental education and becoming an environmental educator and a tour guide."

"After college, I worked as an environmental educator for several years for Texas State University and after I did that I put on an environmental festival in the town I was living, San Marcus, Texas, and I decided that I wanted to do something more, and I wanted to do something a bit more adventurous, so I applied to be a park ranger at Crater Lake National Park in 2015 ... and I was selected to be a seasonal ranger," she said.

"I started at Crater Lake National Park in southern Oregon, and I was there for two years before going back to school to get my master's degree," Waymouth said.

Growing up in southern Texas, Waymouth said that she didn't visit many national parks growing up.

"We didn't often go to places like Yosemite or Yellowstone. When people think of national parks, we didn't do a lot of that," Waymouth said.

"I didn't go to my first national park until I was 22," she said, adding that her first one was Black Canyon of the Gunnison National Park in Colorado. "Very beautiful, highly recommend ... it's amazing. It's epic," she said of the park.

Prior to her work in the NPS, Waymouth said she did several things that helped her land this job at HSNP.

Crater Lake and Hot Springs are the only two national parks that Waymouth has worked for in her career with the National Park Service.

"At Crater Lake I was an interpretive ranger, so I worked seasonally in the summer. I did guided hikes and boat tours and trolley tours, and I gave talks. I did a lot of visitor services. A lot of the very classic, when you think of a park ranger, that was what I did," she said of working summers there.

"I worked in the winter and I got to do snowshoe guided hikes with people, and that was a lot of fun because Crater Lake has a 20-foot snow pack, so when you're snowshoeing, it feels like you are kind of floating in the air," Waymouth said.

"And then in the spring I got to be part of the classroom at Crater Lake program, which was when surrounding schools would come in to do snowshoe tours as a classroom with a ranger, so it was a lot of fun," she said.

One difference Waymouth said that Crater Lake and Hot Springs has is "It's a lot cooler in summer at Crater Lake than it is here."

"It is really different," Waymouth said of Hot Springs vs Oregon, "but honestly I love it."

"I had never been to Hot Springs before I moved here. I had heard of Hot Springs but anytime we drove through Arkansas we just stayed on I-40 and kept driving, and I've been so pleasantly surprised. I moved here last March, so basically right when the pandemic started. I mean literally I started and two days later the park shut down and then all the restaurants shut down and I feel so fortunate, and I think maybe Arkansans at large do, because there's so much natural space and so much public lands, even though the city might have been closed down, it was still easy to go off into nature and explore," Waymouth said.

She also said that she, and her dog, Leila, has enjoyed the local lakes, trails and the national forest. "Everyone that I've met here has been so nice and welcoming. I really dig it."

Since arriving in town, Waymouth said "the biggest thing I've done is, together with the community and park staff, we've put together a vision for the park's 100th birthday."

"Of course, when we first started we did not anticipate that COVID would happen the way that it did and last as long as it did, so we've had to make a lot of adjustments, and even today we are still constantly micro-adjusting what it is that we are doing, but we dreamt the biggest dream that we thought of. This is an event that only happens once every 100 years," Waymouth said.

Waymouth said that they wanted to have both yearlong events for the celebration and "unique monthly events that people could be a part of in order to keep the celebration happening all year long."

In addition to planning these events, Waymouth said that she has also done some guided hikes "and I do a lot of interviews for people, do visitor services, offer training for staff here, a lot of everything." She also helps manage the park's social media accounts.

The pandemic, Waymouth said, "forced us to think about events in a different way." "I feel like it's really increased our creativity," she added.

"Things we can normally do, we just can't so we are constantly like 'OK, if we can't do that, what can we do? How can this be more fun? How can this be better? If it has to be virtual, what can we do to make it more interactive or just more fun in general?' So I feel COVID has increased our creativity as a planning team," Waymouth said.

"It's like a really complicated puzzle, and it does feel really gratifying at the end of an event to see the successes and to learn the lessons, but yeah, it's been a lot of fun," Waymouth said.

As Waymouth was hired for the park's centennial celebration, she said that she doesn't know what is next for her. "I guess my future is kind of uncertain. My position is a term position and there is a possibility for an extension, but we just don't know," she said.