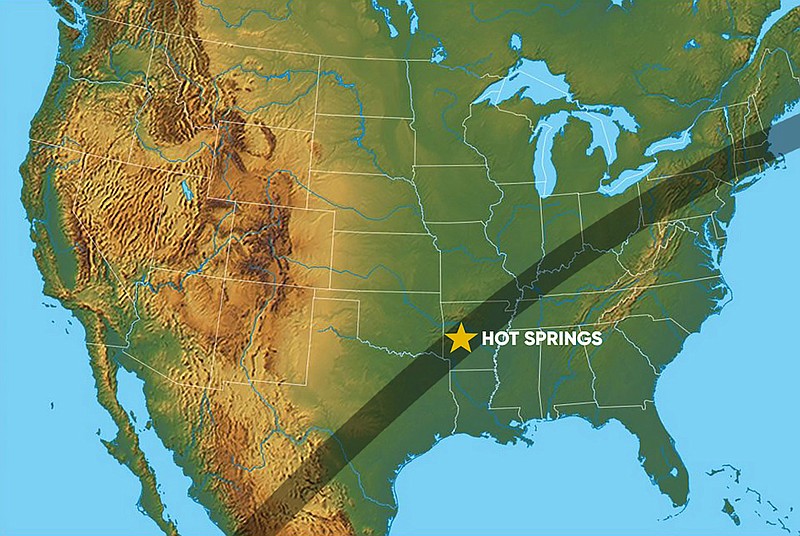 It's nearly three years away, but Hot Springs is already showing up on "watch lists" as the place to be for a total eclipse of the sun on April 8, 2024.

The latest is Forbes.com, which included Hot Springs on its list of key cities and locations from which to view the eclipse, a list that also includes Dallas, Cleveland, Niagara Falls, and Montreal.

The list is part of the article "It's Just 1,000 Sleeps Until The Next 'Great American Eclipse.' It's Time to Dream -- And Plan" posted on Forbes.com last week.

The city's totality point man for the eclipse planning process is Bill Solleder, the director of marketing for Visit Hot Springs. Solleder is planning now for an event that could conceivably draw 1 million visitors to the Spa City.

"With an inevitable event like the 2024 eclipse, there's good reason to be prepared," Solleder said Tuesday when asked about the Forbes article.

"I'm encouraged that the city of Hot Springs, Garland County, police, fire and the tourism industry see the tremendous impact the eclipse will have on Hot Springs, and have already marked their calendars for April 8, 2024," he said.

Solleder pointed out last August that, in 2017, the last solar eclipse visible from North America, the small town of Casper, Wyo., saw a million people flood into their little town because Casper was in the path of totality and was "completely unprepared to accommodate an influx of that size."

Visit Hot Springs has a "micro-website" set up, https://www.totaleclipsearkansas.com/, that at this point consists of a map, a countdown -- as of this writing, two years, 262 days remaining -- and information on lodging and who to contact for more information.

Shortly after the 2017 event, Solleder posted a "Save The Date" social media campaign on the Internet pointing out that Hot Springs will be in the path of totality for the 2024 eclipse and urging people to consider coming to the city to view the upcoming event.

That campaign won a Henry Award from the Arkansas Department of Parks and Tourism.