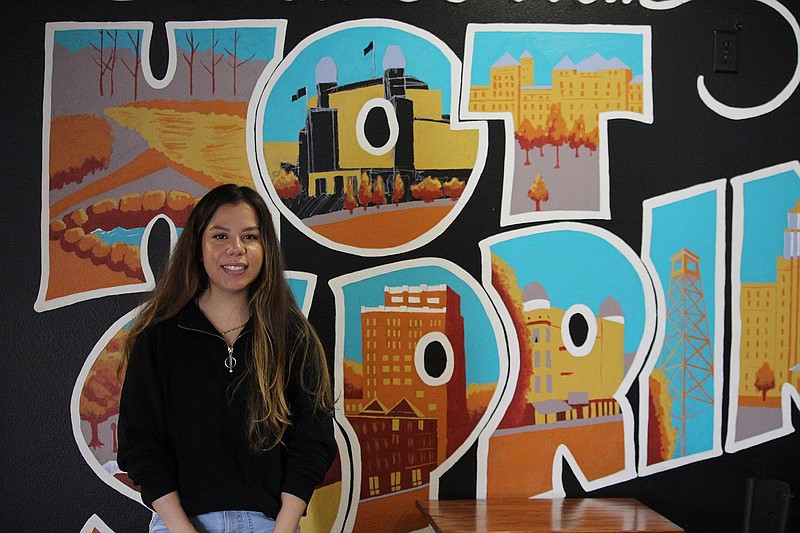 Capachi’s Coffee and Tea manager Allison Rubio stands in front of a Greetings from Hot Springs Mural in the store. Local coffee shops are being affected by multiple product shortages. - Photo by Krishnan Collins of The Sentinel-Record

Plastic cup and flavored syrup shortages are the newest wave of pandemic era deficiencies affecting local businesses, as coffee shops around town try to keep the items they need in stock.

While local coffee shops Mug Shots Express and JavaPrimo both told The Sentinel-Record the cup shortage has not been affecting their stores, Capachi's Coffee and Tea and Red Light Roastery were both affected by recent shortages.

Capachi's manager Allison Rubio said the store tries to have a three-week supply on everything in the shop.

"What's basically happened is when we go to make sure like do we have at least three weeks of stock available, we end up trying to order something that's on backorder or that's going to take a month or two to even ship out," Rubio said. "So we have to kind of pivot."

To combat the shortage, Capachi's uses a variety of different lids and cup sizes along with different manufacturers to make sure there's never a shortage of cups for customers.

"That way if one's on backorder for a month we have one that's already coming and that we've ordered a couple weeks ago so it'll be here within the next week or so," Rubio said. "Basically we just make sure that we have different options. We have to keep doing that which is a little bit more frustrating but that's what we've done."

The shortage really started to get frustrating for Capachi's around two months ago.

Rubio said while shortages do happen once in a while with manufacturers, the biggest shortage she has ever seen has been over the past couple of months.

"In normal scenarios, the worst thing that'll happen is you're waiting an extra week or two," Rubio said. "A couple of months ago when I went to order it was a two-month wait for it to even ship out. So that's the first time I think I really noticed it was pretty bad."

Moving forward, Rubio does not have a clear time frame on when the shortage might end.

"There's no end to it at this point honestly," Rubio said. "Most people just keep saying, 'Hopefully things will get back to normal soon.'"

For Red Light Roastery, the increase in the price of products is affecting the shop the most. Using compostable and biodegradable cups and lids is an important part of Red Light's business.

"The thing that affects our business the most is the price increase of so many packaging products," Red Light Roastery owner Adam Moore said. "So far we have resisted an increase in pricing across the board in our shop."

The usual brand of compostable cups and lids Red Light uses has been available off and on, but another acceptable eco-friendly cup brand was available to use.

Moore is also dealing with increased production times on the custom bags he uses to package roasted coffee in.

In the past, the bags took six weeks to produce but now they take 12 or more weeks in production. Not only do the bags take longer to produce, but the price of the bags has increased by 20%.

While Red Light Roastery has resisted increasing its prices for now, that could change in the future.

"Some of our cups, lids and other packaging have increased 30-50% in the past year, and if this continues to rise in price then we will have to bump prices to reflect the increase in costs," Moore said.

Currently, back at Capachi's, customers are not feeling the effects of the cup shortage.

"Even if it's inconvenient for us to have to restock, I mean the last time we restocked I think I restocked enough for two months," Rubio said. "It's more inconvenient storage-wise and just bill-wise but we try to make sure customers don't ever feel the hiccups we're maybe going through."

Perhaps more challenging for Capachi's than the cup shortage, Rubio has found it increasingly challenging to get her hands on flavored syrups and sauces.

"I've been working here for about two years now and I've been the manager for about six months and I've never ever seen a syrup or sauce shortage ever," Rubio said. "These past two months that I've tried to order, I haven't been able to get a specific one at all."

The wholesalers who sell to Capachi's cannot find the syrups either and sometimes they will not even call the store because they are so low on supply.

"It's super frustrating but you just pivot," Rubio said. "We try and implement sugar-free items. It's almost like a game. You wait for your manufacturers to give you that opening of you can order again then you just order in bulk because you know it's going to happen."

Capachi's offers a seasonal menu and tries to push flavors to customers that are readily available. Baristas also create different recipes for drinks they know they can maintain all season and that customers will also enjoy.

While Capachi's has not yet had to turn a customer down for ordering a drink with a certain flavor in it, some customers who buy bottles of syrup directly from the shop have been told those bottles just aren't available.

Looking into the future, the next few months present another challenge to the store.

"The next few months are definitely going to be interesting because it's fall," Rubio said. "Fall for coffee shops is huge. It's every coffee shop's biggest season by far. I think the challenge really is going to be maintaining those fall flavors because they're going to be in demand everywhere."

Capachi's will have to be inventive with its drinks in the fall and create sustainable concoctions with flavors not quite as popular as the normal fall fare.

"Everyone knows a pumpkin or maple or anything like that," Rubio said. "Trying to come up and pivot away from those things, that's going to be really interesting. I just can tell that with fall and fall flavors we're going to struggle. It'll be interesting, though."