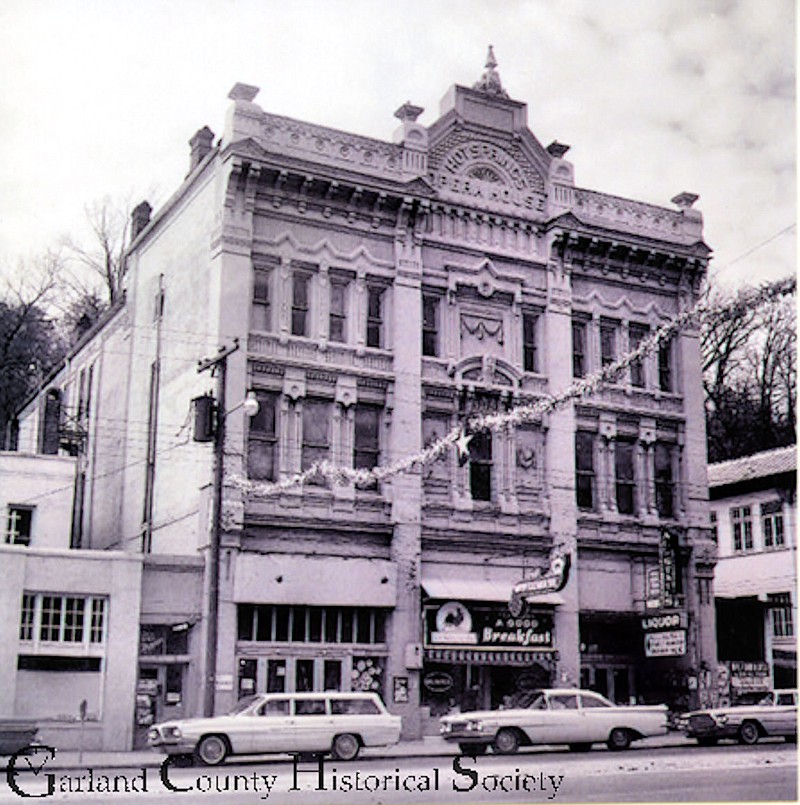 Although performances at the Opera House had ended in 1917, retail stores continued to use the first floor, as shown in this 1950s photograph.

Where did Hot Springs’ residents and tourists go for arts and entertainment long ago? The best of the early theaters was a hall (with a tin roof) above the fire station. Once a fire alarm and a hail storm “sounded off” at the same time during a performance. That might have helped spur Col. Samuel Fordyce to finance the Grand Opera House at 200 Central Ave. in 1882.

Also, the timing was right. By the early 1880s, our city of over 3,500 was a nationally known health mecca. Called the “finest example of Victorian opera house architecture between the East Coast and Central City, Colorado,” the three-story brick Opera House was designed to show that we were as cosmopolitan as the cities rich visitors flocked here from.

In November 1882, the red velvet curtains lifted for the first performance — noted actor Frederick Warde in the drama “Virginius.” Ladies’ brilliant jewels and elegant gowns and gentlemen’s tuxedos gleamed in the rich glow of frosted gas lights. A thousand patrons could occupy the second-floor theater (which included a balcony and four opera boxes) after entering the elaborate third-floor lobby from Canyon Street.

Opera and acting companies, famous singers and musicians, and nationally known speakers drew audiences. Star performers who appeared at the Opera House included Lillian Russell, Billy Burk, Evelyn Nesbit (“The Girl in the Red Velvet Swing”), and James O’Neill (father of Eugene O’Neill). Often, a parade down Central Avenue would announce the opening of a show—such as one in 1882 for General Tom Thumb of P.T. Barnum’s circus fame.

The first floor was leased to three businesses — the Musgrove grocery store, the Opera House Saloon, and Bentz Brothers Undertakers. (Having an undertaker next door was convenient in 1884 when Police Chief Tom Toler fatally shot his would-be assassin in the saloon.)

When the city opened the Auditorium Theater on Convention Boulevard in 1904, the Opera House’s days were numbered. The “class” acts now appeared in the new theater, which had more seating and the second-largest stage in the South. The Opera House became the venue for vaudeville acts, which were not well-attended, and in 1911 there was a brief attempt to show motion pictures there. The final live performance was a minstrel show on Dec. 24, 1917.

Eventually, the empty building was condemned by the city. In 1961, a campaign to buy and renovate the historic structure was spearheaded by auto dealer Hugh Beasley. However, those who wanted to save the Opera House could not raise enough money quickly enough to purchase the property. The Opera House was razed in 1961. An architectural treasure that was once the cultural hub of the city was replaced by the Aristocrat Hotel parking deck.