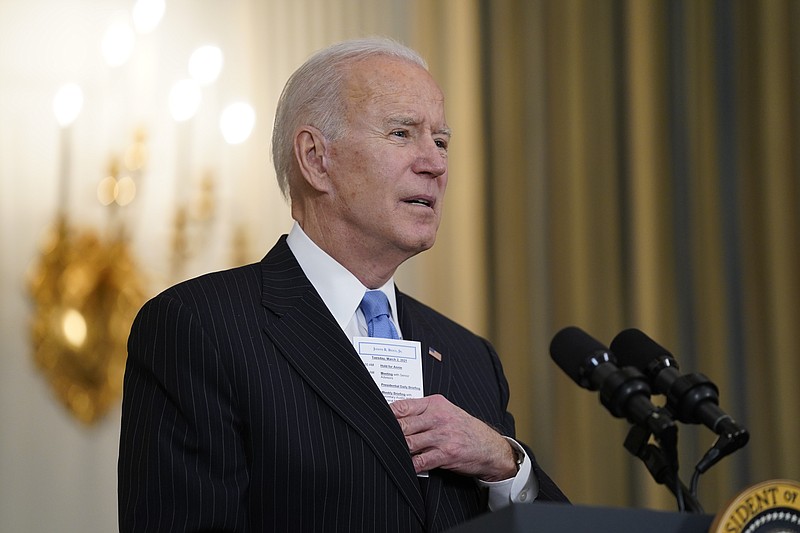 The Associated Press President Joe Biden speaks about efforts to combat COVID-19 in the State Dining Room of the White House on Tuesday in Washington.

WASHINGTON -- President Joe Biden said Tuesday that the U.S. expects to take delivery of enough coronavirus vaccines for all adults by the end of May, two months earlier than anticipated, as his administration announced that drugmaker Merck & Co. will help produce rival Johnson & Johnson's newly approved shot.

With the bolstered supply, Biden also announced he would be using the powers of the federal government to direct all states to prioritize vaccinating teachers, and said the federal government would provide the doses directly through its pharmacy program. He challenged states to administer at least one dose of the vaccine to all educators by the end of March as part of his administration's efforts to reopen more schools across the nation.

"We're now on track to have enough vaccine supply for every adult in America by the end of May," said Biden, who likened the partnership between the two drug companies to the spirit of national cooperation during World War II.

Biden's twin announcements quickly raised expectations for when the nation could safely emerge from the pandemic with the promise of additional vaccines, but it highlighted the looming challenge facing the nation: successfully putting those doses into arms.

Even as he expressed optimism, Biden quickly tempered the outlook for a return to life as it was before the virus hit.

"I've been cautioned not to give an answer to that because we don't know for sure," Biden said, before saying his hope was sometime before "this time next year."

Biden's speech was set against the backdrop of states across the country moving to relax virus-related restrictions. This comes despite the objections of the White House and the nation's top infectious disease expert, Dr. Anthony Fauci, who have raised alarm about new variants of the virus and pleaded against any relaxation of virus protocols until more Americans are vaccinated. In Texas, GOP Gov. Greg Abbot moved to lift his state's mask-wearing mandate and a host of other limitations. Michigan's Democratic Gov. Gretchen Whitmer eased capacity limits on restaurants and both public and residential gatherings.

Fauci has previously said the nation must achieve a vaccination rate of about 80% to reach "herd immunity." Only about 8% of the population has been fully vaccinated according to the Centers for Disease Control and Prevention, though the pace of vaccination has been increasing, with the U.S. setting a new daily record for injections on both Thursday and Friday of last week.

In hopes of increasing vaccinations even further, the Biden administration told governors to make preparations to administer even more doses in the coming weeks. More shots are also heading toward the federally backed program to administer doses in retail pharmacies, which federal officials believe can double or triple their pace of vaccination. More than 800,000 doses of the J&J vaccine will also be distributed this week to pharmacies, on top of the 2.4 million they are now getting of the Pfizer and Moderna vaccine supply.

Those pharmacies will be key in getting the vaccines into the arms of teachers -- particularly in the roughly 20 states where they have not been prioritized for shots -- which will help reopen schools to better educate students who have been at risk of falling behind during the pandemic and reduce the burden on parents who have had to choose between childcare and a job.

"Let's treat in-person learning as the essential service that it is," Biden said. Teachers will be able to sign up directly through the participating retail pharmacies in their local area, the administration said.

White House press secretary Jen Psaki also announced Tuesday that the federal government was increasing supply of the Moderna and Pfizer vaccines to states next week to 15.2 million doses per week, up from 14.5 million previously. States will also receive 2.8 million doses of the J&J shot this week.

On a call with governors Tuesday, White House coronavirus coordinator Jeff Zients said states should prepare for administering 16-17 million total weekly doses of Pfizer and Moderna vaccines by the end of March, climbing to 17-18 million weekly by early April. The supply of J&J doses to states, expected to dip after the initial shipment this week, will climb to 4-6 million weekly doses by the end of March and 5-6 million doses weekly through the end of April.

Officials have said J&J faced unexpected production issues with its vaccine and produced only 3.9 million doses ahead of its receiving emergency use authorization on Saturday. The company has promised to deliver 100 million doses by the end of June.

Before the approval of the J&J shot, Biden had suggested that it would take until the end of July to have enough vaccine for every adult in the U.S.

The assistance from Merck was expected to help J&J meet its production commitments and expand supply even further, but the administration did not immediately provide specifics. The news was first reported by The Washington Post.

Psaki said that an "across the administration effort" was required to get the two historic rivals to work together on the vaccines, even though conversations between the two companies have been going on for months.

"There's a difference between conversations and it moving forward," she said.

The White House said Merck would devote two plants to the production process. One would make the vaccine and the other would handle inserting the vaccine into vials and ensuring strict quality controls. Psaki said the Biden administration was using its powers under the Defense Production Act to help Merck retool to work on the production.

Still it was not immediately clear when the effect of Merck's assistance would be reflected in supply. Federal officials have cautioned that setting up the highly specialized manufacturing lines to produce vaccines would take months.

Compared to the two-dose versions produced by Moderna and Pfizer, the J&J vaccine is less resource intensive to distribute and administer, making it a critical piece to U.S. plans to spread vaccinations around the world -- but only once Americans are inoculated. The J&J vaccine can be stored for months at refrigerated temperatures, rather than frozen, and doesn't require patients to return for a second dose three or four weeks later.

J&J has set up a global production network that includes brewing bulk vaccine at its Janssen facility in the Netherlands, and with a company in the U.S., Emergent BioSolutions, and another in India, Biological E. Ltd. Other contract manufacturers are lined up to help with later steps, including putting the vaccine into vials, in the U.S., Italy, Spain and South Africa.

In the scramble to create COVID-19 vaccines, the three Western drug makers who've dominated the vaccine industry for decades -- Merck & Co., Sanofi and GlaxoSmithKline -- surprisingly all fell short. Merck halted its own plans to develop a coronavirus vaccine earlier this year, finding that their candidates were generating an inferior immune system response compared with other vaccines. It said it would instead focus its work on developing treatments for COVID-19.

Now, amid the global clamor for more vaccine doses, those heavyweights are helping manufacture doses for less-experienced rivals whose vaccines won the first emergency authorizations from regulators.

Merck has since said it was in talks to help other drug companies with vaccine production, but wouldn't say Tuesday whether other deals are imminent.

"Merck remains steadfast in our commitment to contribute to the global response to the pandemic and to preparing to address future pandemics," the Kenilworth, New Jersey-based company said in a statement.

Sanofi Pasteur, named for pioneering French biologist Louis Pasteur, produces more than 1 billion vaccine doses a year and is a leader in pediatric, influenza and polio vaccines. It, too, has had delays with its COVID-19 vaccine candidates. While it tries to resolve those problems, Sanofi has agreed to bottle and package about 125 million doses of the vaccine from Pfizer and German partner BioNTech, as well as roughly 12 million doses per month of J&J's vaccine.

GlaxoSmithKline, which makes vaccines against shingles, hepatitis, meningitis and many childhood illnesses, has focused its COVID-19 efforts on combining its adjuvant technology with rival companies' vaccines. Adjuvants boost immune system response to vaccines, meaning smaller doses could be used and supply could be stretched. 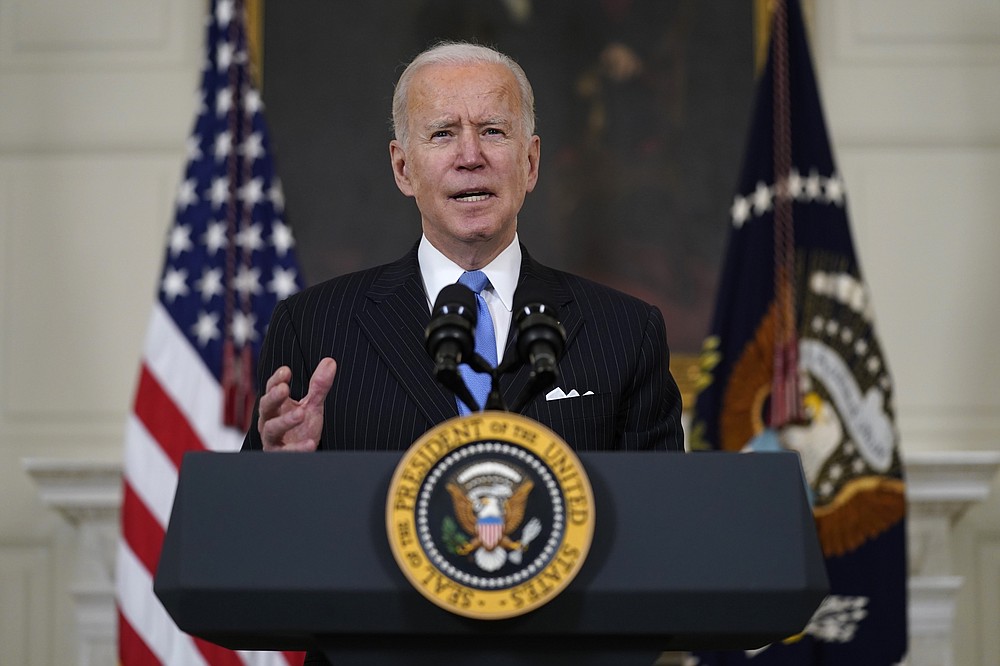 The Associated Press President Joe Biden speaks about efforts to combat COVID-19 in the State Dining Room of the White House on Tuesday in Washington. 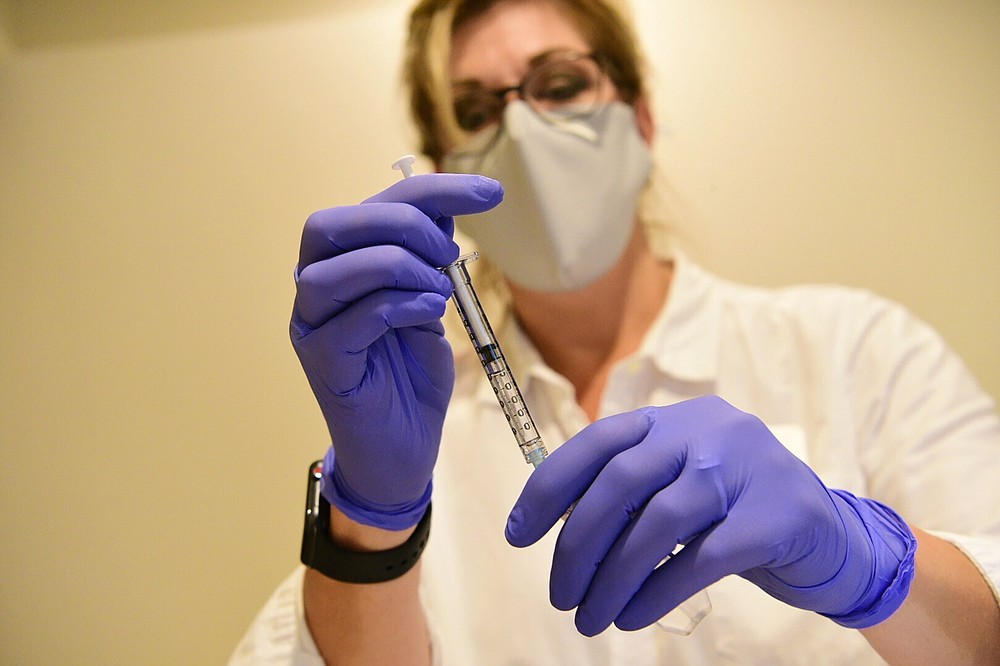 FILE - This September 2020, file photo provided by Johnson & Johnson shows a pharmacist preparing to give an experimental COVID-19 vaccine. The U.S. is getting a third vaccine to prevent COVID-19, as the Food and Drug Administration on Saturday, Feb. 27, 2021 cleared a Johnson & Johnson shot that works with just one dose instead of two. (Johnson & Johnson via AP, File) 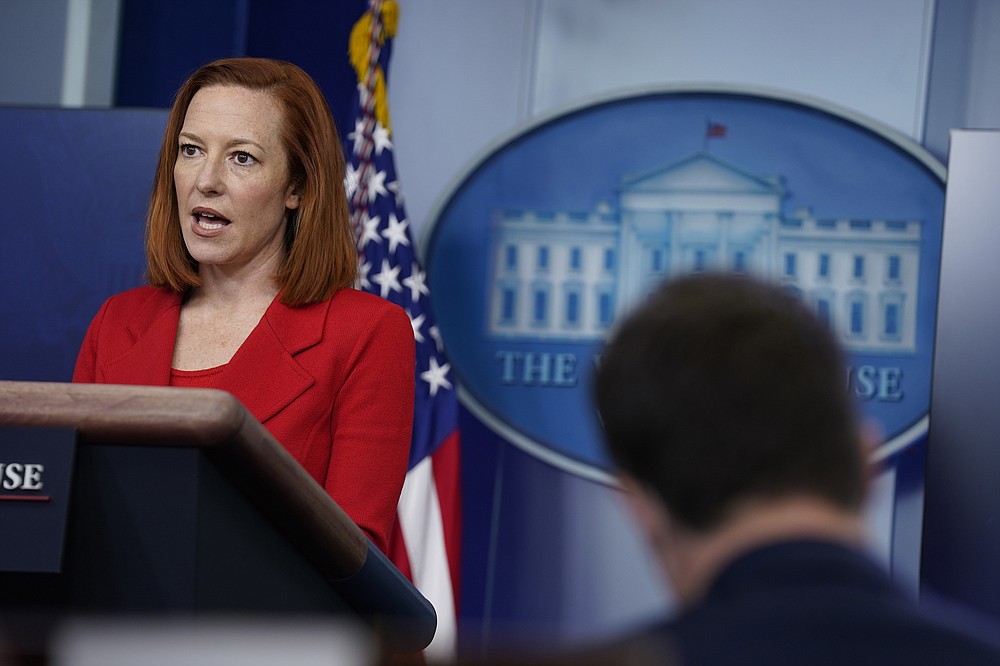 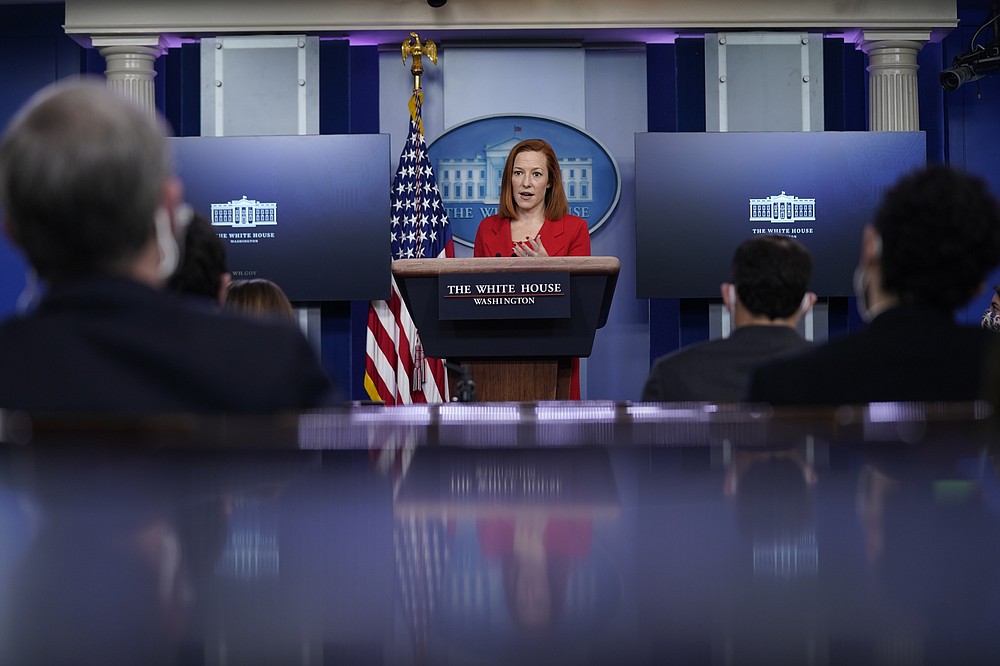