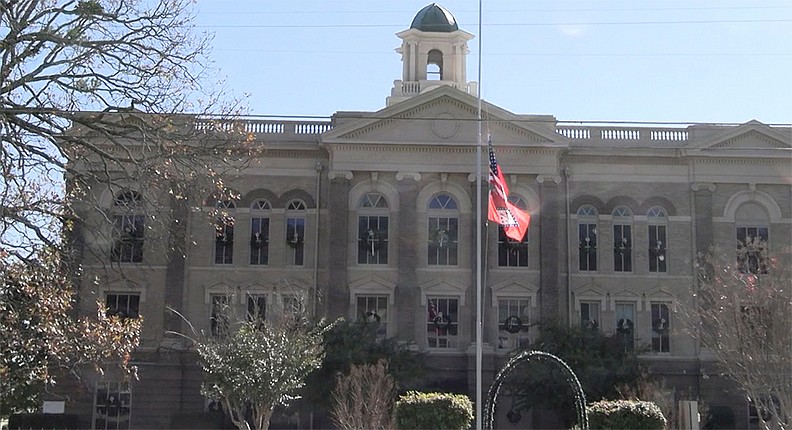 A file photo of the Garland County Court House. - Photo by Tyler Wann of The Sentinel-Record

Garland County transitioned from a biweekly to a semimonthly payroll schedule last year to avoid an extra pay period and $700,000 in salaries, payroll taxes and retirement contributions.

"Due to a leap year, this happens every few years, depending on the pay date," the county finance department said in an email it sent justices of the peace last week.

The quorum court switched the county to a semimonthly, 24 pay period schedule in January 2020 instead of stretching salaries over 27 pay periods or giving employees an extra paycheck. Paydays in 2021 are generally the first and 15th of the month under the semimonthly schedule. April and July would have three paydays and August would have one because of paydays falling on holidays or weekends.

"Everyone agreed that semimonthly would be the best option for the county, but what we didn't know is the accounting nightmare it would cause the sheriff's office and finance department," the finance department's email said.

The 12-hour shifts and 86-hour pay period sheriff's deputies work complicate payroll. The finance department said the semimonthly schedule made it more complicated. Processing employer contributions to employee retirement accounts is also more complicated under the semimonthly schedule, the finance department said. The county contributes more than 15% of an employee's salary to their retirement account.

The biweekly schedule, which would pay employees every two weeks, would go into effect April 1 if the full quorum court adopts the ordinance next week. The pay week would run from Sunday to Saturday, with paydays on Thursday. April and September would have three paydays.

"Also, employees never knew how their paycheck would look unless they were always checking the pay schedule," the finance department's email said. "Of course, they could have kept up with this, but what a hassle. Looking at the 2021 biweekly payroll schedule, you see we are constant on the number of days employees are paid except for the February 12 and April 1 pay date."

Thursday paydays under the biweekly schedule would create a 27th pay period in 2026.

"We can plan now to reserve the extra funds to cover an additional payroll in 2026 or the prior options to stretch each employee's salary out over 27 periods and lessen the amount the employee received each paycheck, reducing their hourly rate, or include a 3% (cost-of-living adjustment) to cover the difference," the finance department said.

Another ordinance the committee advanced included a $50,000 appropriation from the Ouachita Memorial Hospital Sale Fund for a nonuniformed position at the county detention center that would be reimbursed by the Peers Achieving Collaborative Treatment Grant the Arkansas Department of Human Services awarded the sheriff's department.

The ordinance also appropriated $428,610 from the OMH Fund for a safe room on the county's Ouachita Avenue campus. The Hazard Mitigation Safe Room Grant the Federal Emergency Management Agency awarded the county will reimburse the OMH Fund.

The fund, which was seeded by the county's sale of the Ouachita Memorial Hospital in the 1980s, had a $7.5 million cash balance at the end of January, according to a summary of treasury account balances.