WATCH: Lakeside student's appeal for snacks for classmates brings in over $200 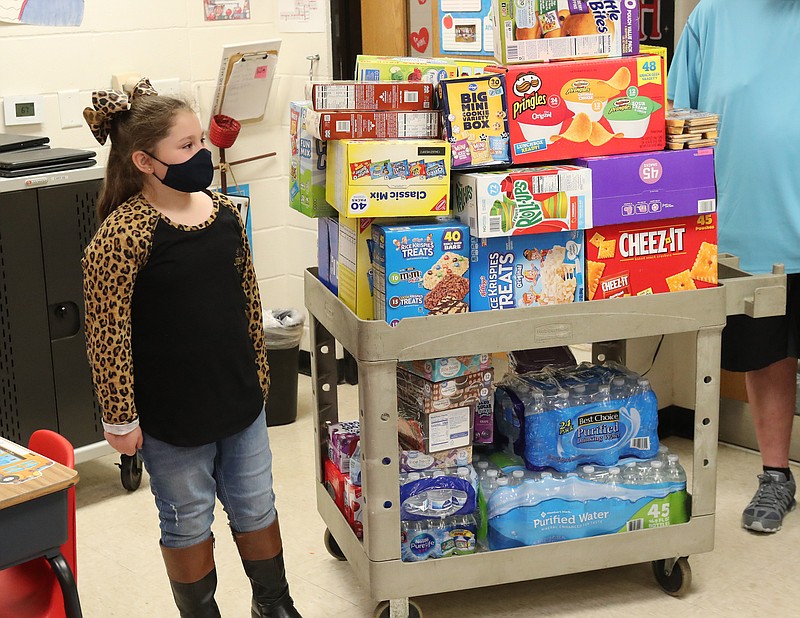 Lakeside Intermediate School student Paisley Melancon, 7, with all the snacks she bought her classmates Friday. - Photo by Richard Rasmussen of The Sentinel-Record

Paisley Melancon, a second-grader in Jennifer Horner's classroom at Lakeside Intermediate School, was able to raise over $200 on social media to buy snacks for her classmates, after noticing that some had to do without at snack time.

Her mother, Hannah Melancon, went on Facebook on her behalf and requested donations, and Paisley Melancon said the support she received was surprising, raising $225.

"I felt really happy that they would do that for my classmates. They didn't have to, but they actually did," Paisley Melancon said.

"I was very sad that I had to eat in front of them because I brought my snack," she said.

Hannah Melancon said she noticed something was wrong with her daughter when she came home that day and she told her mother what she had witnessed.

"Our sweet girl has a special request for her birthday. Due to COVID-19, it has changed a lot of things in her classroom. Each day parents are to send a snack for their child to eat during snack time, and they have to bring a water bottle for a drink," the Facebook post said.

"If a child forgets or the parent forgets, they do not have extra snacks in the classroom, and the water fountains are turned off. Paisley was very upset last week and said that 6 out of the 20 kids in her classroom went without snacks.

"That's close to half. Times are hard. There is not a supply of snacks for the teacher to give out, and since they cannot share food, nothing is saved from the school lunches for snacks," the post said.

"Occasionally, the school nurse will have a packet of saltine crackers to give, but most days, they go without until lunch. Her teacher has run out of plastic cups to give water from the sink, and there is not a restock of these items.

"So our sweet, sweet girl has asked for her birthday that instead of receiving gifts she would like to use her special day to collect items for her classroom. She hopes to have enough items donated to last until the end of the school year so that no child goes without for the rest of the year. If you would like to donate something to her class, please let me know," it said.

"This has been amazing watching our little girl pour her heart into something that is making a difference. Brandon Melancon and I are so lucky to have such a sweet girl," Hannah Melancon said on her Facebook page.

"That's Paisley's heart. She's always been a giver. She's always just wanted to do more and put smiles on people's faces," she said.

"When her mother told me what was happening, it made me want to cry. It's so sweet; she is so thoughtful. We try to teach the kids to treat people how they would like to be treated, and that is what she is doing ... it makes you proud," Horner said.