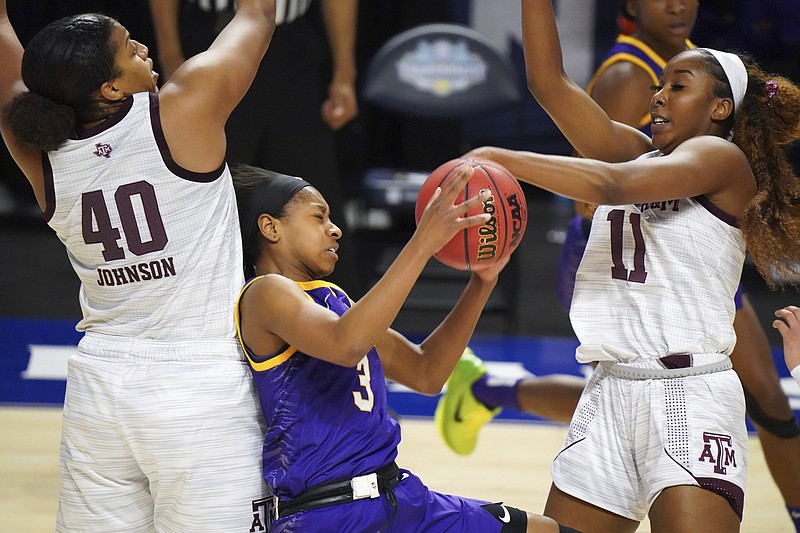 LSU guard Khayla Pointer (3) is defended by Texas A&M guard Kayla Wells (11) and Ciera Johnson (40) during the second half of Friday's game at the Southeastern Conference tournament in Greenville, S.C. Texas A&M won 77-58. - Photo by Sean Rayford of The Associated Press

GREENVILLE, S.C. — Kayla Wells had 16 points, Alexis Morris added 13 and No. 2 Texas A&M opened the Southeastern Conference Tournament with a 77-58 victory over LSU on Friday.

The Aggies (23-1), who won their first league regular-season title Sunday, advanced to the tournament semifinals for the fourth time in the past five years. They’ll face No. 16 Georgia on Saturday in the semifinals.

Jada Boyd added 13 points off the bench for the second-seeded Wolfpack (18-2). They will face Georgia Tech in the semifinals Saturday.

Elizabeth Kitley had 20 points and nine rebounds for the Hokies (14-9).

LAS VEGAS — Cameron Brink scored a career-high 24 points and had 11 rebounds in Stanford’s victory over Oregon State in the Pac-12 Tournament semifinals.

Kiana Williams had 20 points, six rebounds and six assists for Stanford (24-2). The top-seeded Cardinal will play for the championship Sunday against ninth-ranked UCLA.

Van Lith made 9 of 15 shots and hit 6 of 10 3-pointers for the Cardinals (22-2). They will face Syracuse on Saturday in the quarterfinals.

The Gamecocks (20-4) will play No. 14 Tennessee on Saturday night in the semifinals.

The third-seeded Bruins (16-4) will play No. 4 Stanford, the top seed, for the conference title on Sunday.

The Bruins overcame an off-shooting night and staved off a late rally by Arizona (16-5), which carved into a 10-point deficit in the fourth quarter to get within two with a little more than a minute left. UCLA closed it out with a 9-2 run over the final 1:04.

Rae Burrell had nine of her 18 points in the fourth quarter when Tennessee (16-6) outscored the Rebels 28-15.

NEW BRUNSWICK, N.J. — Arella Guirantes scored a career-high 20 points and had 10 rebounds and Rutgers beat Ohio State to take the No. 3 seed in the Big Ten Tournament.

Tyia Singleton scored 18 points on 8-for-9 shooting, had 13 rebounds and blocked six shots to help the Scarlet Knights (14-3, 10-3) win their ninth straight.

The back-to-back Missouri Valley Conference regular-season champion Bears (19-2, 15-0) extended their winning streak to 15, their longest since an 18-game stretch during the 2003-04 season.