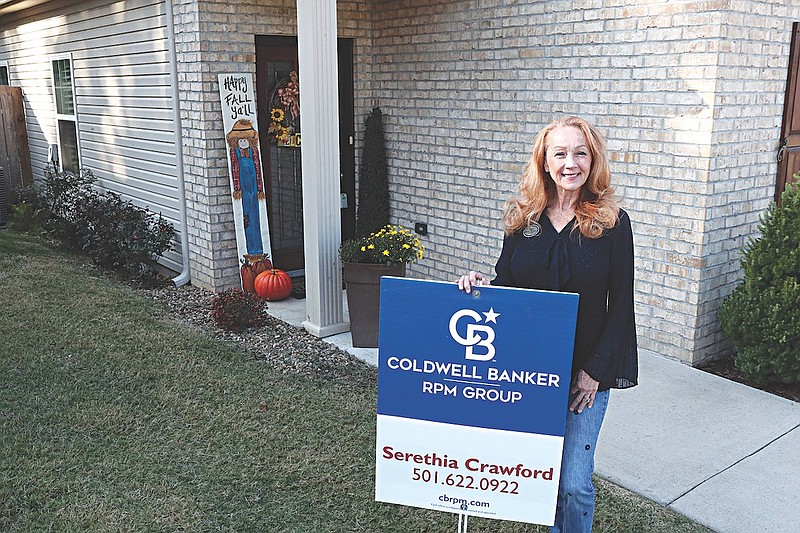 Realtor Serethia Crawford. Photo by Richard Rasmussen of The Sentinel-Record

Even amid scores of success in the real estate world, what really stands out about Coldwell Banker RPM Realtor Serethia Crawford shows itself in her love for the community and her passion for helping those around the Hot Springs area.

Crawford volunteers and participates in a plethora of organizations and events around the city. She's heavily involved in The Greater Hot Springs Chamber of Commerce, Relay for Life of Garland County and one can see her at multiple fundraisers. She makes appearances at tons of events hosted in the city throughout the year.

Before moving to Hot Springs, Crawford vacationed in the Spa City and then leapt at the opportunity to live in her vacation spot. After helping out in the Lake Hamilton School District for many years while staying at home with her daughters, Crawford became a Realtor. Since choosing that profession, her involvement in the community has only skyrocketed.

"We have so much to offer here for everybody, we really do," Crawford said. "I love it. I feel like I've been very blessed my whole life. I know I can help people succeed in their goals and be part of it. I enjoy it. I just like people. That's why I'm in real estate, too."

In her time volunteering in the Lake Hamilton School District, Crawford served on the school board and also served as the PTO president, among other roles.

"When that time period ended, I wanted to keep giving," she said. "I spread it outside the school district and started being more involved in the community as a whole. Just, it's important. We have to have volunteers to do things. It's rewarding for us as individuals when we see these visions come together and people smiling and fundraising, making money for obvious groups that just need help."

Even when she's not officially volunteering, Crawford always keeps her eyes peeled looking for opportunities where she can help the community.

Just recently, after participating in cards over coffee at High Impact Ministries, she realized a shortage of snacks existed.

"I just saw a need there that they needed extra snacks after school," Crawford said. "I went to Sam's yesterday and bought some snacks and took them to the chamber. We're going to collect more and drop those off. I just went for coffee and network, and I saw a need. I'm able to do that, I enjoy doing that and I want to do that."

For 24 years, Crawford has been involved with the American Cancer Society's Relay for Life locally and served on its board for a majority of that time. Beyond just helping the community, the Relay for Life represents a very important personal cause in her life.

Her dad died of pancreatic cancer at 58, while her mom had breast and colon cancer.

"I very much believe in what the American Cancer Society is doing by raising money for research," Crawford said. "That's why now a diagnosis of breast cancer isn't an immediate death sentence like it was years ago. Progress has been made and you don't do that without making money. I've developed a lot of friends in this group and we have fun."

Crawford keeps a designated costume closet at home and dresses up for different events.

"If you see me in a different outfit, you'll know it's OK, she does that," Crawford said. "It's fun, I enjoy it and I know we've made a difference. To see the face of an adult and especially of a child, who has gone through cancer, and the caregivers who have gone through cancer, and see them smile during Relay for Life. We've made money and we've raised some funds, but to see them get celebrated for still being here with us or honoring and remembering the ones we've lost."

While not having been diagnosed, with the history of cancer in her family, Crawford said she knows cancer is very likely for her someday.

Crawford serves as a red coat ambassador for the Chamber of Commerce, and the group puts on multiple special projects in the community while also getting to go to all the fun activities the chamber does.

When new people move to the Spa City, Crawford and other ambassadors help inform them about the school districts in the area, the history of the city and just where to go for different things they might need.

"We are ambassadors," Crawford said with a bit of emphasis. "We try to help recruit membership but we also should be information people for the city. When I tie that in with being in real estate, when someone new from out of state comes into town, I've got packets made up of the fun stuff, the stuff they need to know."

Through the Hot Springs Board of Realtors, Crawford participates in subcommittees that put on events to help area schools like fishing tournaments and food collections.

The list keeps growing. Crawford also served with the American Heart Association and over the past five years, she's really tried to alternate and spread around where she helps out.

For those who want to get involved in the community, Crawford offered one specific piece of advice.

Crawford emphasized that those looking to volunteer in the community need to find their passion. Someone might just have to start volunteering across multiple disciplines before they find that right niche for them.

"I have a neighbor actually who always says she admires me because I'm going and I look like I have a lot of fun, which I do," Crawford said. "She doesn't know how to get started and I said, 'Well, just volunteer.' ... There is somewhere you can volunteer all day long if you want to and you'll get some rewards out of that."

She added someone looking to get involved does not have to participate in expensive fundraisers all the time or go to every dinner, but that person can be on the other side that helps put the fundraiser together.

"Work some of these things," she said. "There's a lot of just fun, personal benefits that you get out of being involved. Call and just say, 'Hey I've got some time, what could I help you do?' It's just a matter of picking up the phone."

When it comes to events in Hot Springs, Crawford said the World's Shortest St. Patrick's Day Parade is the most fun. She participates as a bead wrangler and is with Dallas Cowboys cheerleaders in the parade, so she always enjoys it.

However, as a person that just doesn't miss many events in the city, she holds a long list of events she enjoys attending around town.

"I try to go to most fundraisers," Crawford said. "Again, I can't afford to go to them all, but I go to a lot of them. ... When I see that this particular fundraiser and what they're going to do with the money, then I'm giving them that donation and getting to go to the party."

While being an extremely prominent member of the community, Crawford has also excelled as a Realtor. Perhaps Crawford's crowning achievement, she won Realtor of the Year in 2017.

"There's 300 of us here in Hot Springs and only one gets that per year so I'm real proud of that one," she said. "There's a lot of real estate agents in Hot Springs. It is quite an honor. What that shows is that person has first, given to their community. They're helpful. They know what they're doing. They obviously can help people buy and sell real estate. But it's the whole package and there's a lot, a lot of good real estate agents in this town but some of them will never be Realtor of the Year. So I'm proud of that."

It's been a successful year for Crawford on the Realtor side of things. After the pandemic hampered real estate business for a period of time, a seller's market now exists. Crawford said she hoped that Realtors participated in a lot of education during the pandemic, and the pandemic even forced Realtors to beef up their online presence.

"Homes are selling for more now this year, the last 12 months, than they have," she said. "Some have called it a bubble, some have called it's not going to last long, but it's here. If something is priced right and in a good location, it's going to sell in the first day or two."

Crawford said people from states like Texas and California are moving to Arkansas because of more land and less population.

"Everybody wants the nice house on the river or the lake," she said. "We just have what people want. So it's been a good year."

Although she's been in the business for 17 years, Crawford actually started her professional life as an accountant. After spending all that time volunteering in the Lake Hamilton School District, the Realtor life just fell in her lap.

Before Crawford officially started as a Realtor, she even sold three of her own homes herself so she thought why not make some money while doing something she already knew she could do and enjoyed doing.

"We had a neighbor who had some property and wondered if I would want to get my license and help him develop that," Crawford said. "So that's really where it started. I was going to kind of work part-time to ease in. Well, real estate is a full-time job and it quickly, quickly evolved into a full-time. Man, when that ball gets rolling you just get sucked up in it and enjoy it. I just followed the passion there."

"Everybody in between has a story," she said. "They're all different. You'll learn something every, every day. Something real estate wise, something that hits you personally."

Although Crawford's schedule stays heavily booked, she does like spending time with her grandchildren and she also really enjoys the outdoors during her free time.

Whether it's attending events around town, volunteering her time in some way or whether she's just doing her job, Crawford is going to have a good time doing it.

"I'm a hard worker, that's what I'll say," Crawford said. "I work really hard and I play really hard. I'm going to enjoy it and make the best of it. I'm not going to half do something."