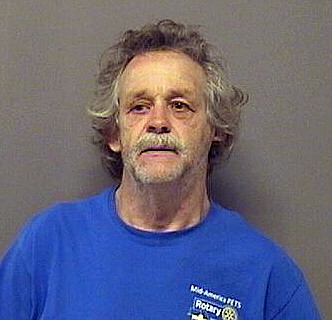 A local man was arrested on felony and misdemeanor charges early Sunday after allegedly making repeated calls to 911 falsely claiming he was in danger and later firing a pistol inside the house.

Howard Charles Webb, 61, of 454 Quarry Mountain Road, was taken into custody at his residence shortly before 4 a.m. and charged with a felony count of terroristic act, punishable by up to 20 years in prison, and a misdemeanor count of communicating a false alarm, punishable by up to one year in jail.

Webb, who lists no prior felony history, was being held on a $6,000 bond and was set to appear Monday in Garland County District Court.

According to the probable cause affidavit, shortly before 11 p.m. Saturday, Garland County sheriff's deputies responded to the Quarry Mountain Road address after one resident, identified as Webb, called 911 stating a known female was "at his door with a gun trying to get inside."

Once deputies arrived at the scene, they determined the woman also lived there, was not armed with a gun, and was not attempting to get into Webb's room.

About 30 minutes later, Webb reportedly called 911 again "in a panic" saying he had locked himself in his bedroom in an attempt to get away from the woman. Deputies responded and again determined his claims to be false and told Webb to "go to sleep and not call back unless he had a true emergency."

Around 3:30 a.m. Sunday, Webb called 911 a third time stating "they were trying to get him from his room." He disconnected the call after making that statement, but called back five minutes later and "demanded to stay on the phone" until deputies arrived.

At around 3:40 a.m., Deputy Kevin Hampton arrived and made contact with Webb's nephew, who was sitting outside the house in a vehicle. The nephew said he came outside after he heard Webb fire a shot from his room. He didn't know what the bullet struck inside the house.

Deputies determined the only other person inside the house was the woman Webb had claimed was trying to get him, who the nephew said was in her bedroom. Deputies were able to get the woman out and noted she had to be helped down the exterior steps "due to her inability to walk well without assistance."

Hampton noted this "added to the false claim" by Webb that she was "trying to harm him physically."

Deputies were still on the phone with Webb who reportedly admitted he had a pistol in his hand. He was told to put the pistol down and come outside with his hands up and he finally complied and was taken into custody without further incident.