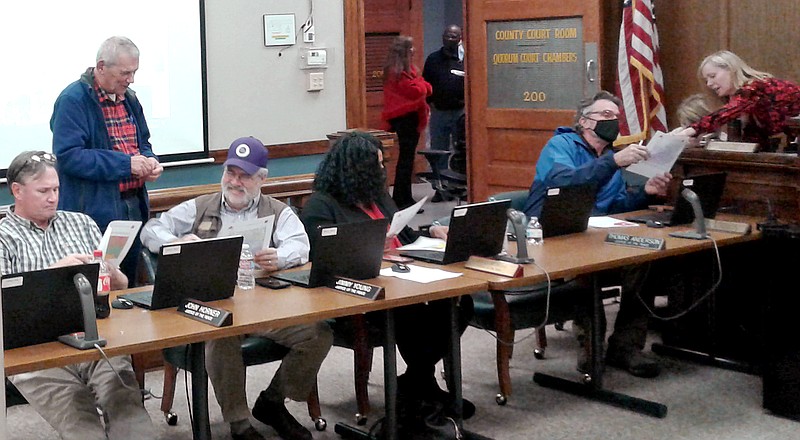 District 5 Justice of the Peace John Horner, left, Garland County Election Commission Chairman/Election Coordinator Gene Haley and District 4 JP Jimmy Young discuss the draft 2020 JP map prior to the start of Monday night’s quorum court meeting in the county courtroom. The draft map can be viewed on the election commission website, http://www.garlandcountyvote.org. - Photo by David Showers of The Sentinel-Record

Garland County voters will decide if the 0.625% sales tax securing $54.6 million in road bonds will be extended through June 30, 2027, weighing in at a Feb. 8 special election.

An ordinance the Garland County Quorum Court adopted Monday night with no discussion or debate called for the special election to extend collection of the countywide sales tax.

County Judge Darryl Mahoney told the quorum court's Public Health, Welfare and Safety Committee last week that collections are on pace to retire the road bonds before the end of next year's first quarter, more than a year earlier than what was projected when Stephens Inc. marketed the debt in October 2016.

Mahoney said proceeds from the extension would not secure more debt but would flow to the county road fund, similar to how proceeds from the 0.375% countywide sales tax voters approved in 2011 to operate and maintain the county detention center flow to the county jail fund. If voters reject the extension of the 0.625% sales tax, Mahoney could sign a termination of tax certificate by March 31, taking the tax off the books by July 1.

If the sales tax is extended, the proceeds would fund the improvement and replacement of existing roadways, including bridges, overpasses, underpasses and sidewalks, according to the ballot question the quorum court adopted Monday night.

Mahoney told justices of the peace last week the proceeds would not be used for infrastructure expansion. The county contributed $30 million from the $54.6 million bond issue voters approved in a June 2016 special election to the $79 million extension of the King Expressway from the Highway 70 east interchange to the junction of highways 5 and 7.

The 2016 vote granted the first extension of the sales tax, which voters initially approved in an October 2011 special election to secure $41 million in capital improvement bonds that financed the construction of the detention center at 3564 Albert Pike Road.

Collections began in April 2012 and continued through 2016. The termination of tax certificate former County Judge Rick Davis signed at the end of the third quarter of 2016 suspended collections from Jan. 1, 2017, to June 30 of that year.

According to the 2022 budget the quorum court will consider next month, the county and Hot Springs have $6 million and $5 million, respectively, in their local shares of the $54.6 million bond issue floated in the fall of 2016. An interlocal agreement the two governments signed prior to the 2016 election pledged a combined $3.8 million from the city-county shares to partner with the state in reconfiguring the Airport Road-expressway interchange.

Mahoney told JPs last month that the state's 0.50% sales tax will fund improvements to the interchange, as well as improvements to other expressway interchanges. The legislatively referred constitutional amendment voters approved last November made the statewide sales tax a permanent levy.

Act 610 the Legislature passed earlier this year allows next year's special election to be held in February, May, August or November. The May and November dates have to coincide with the May 24 preferential primaries and nonpartisan general election and the Nov. 8 general election.

Voters approved the June 2016 extension by a 4,601-2,637 margin. Less than 12% of the county's more than 60,000 registered voters cast a ballot. Mahoney said holding the special election on a second extension in February, rather than during the May primaries or November general election, when turnout would be higher, allows for the continuous collection of the tax. Holding the election later in the year risks an interruption in collections.

The extension will be on the ballot with millage increases the Fountain Lake and Mountain Pine school districts are requesting.