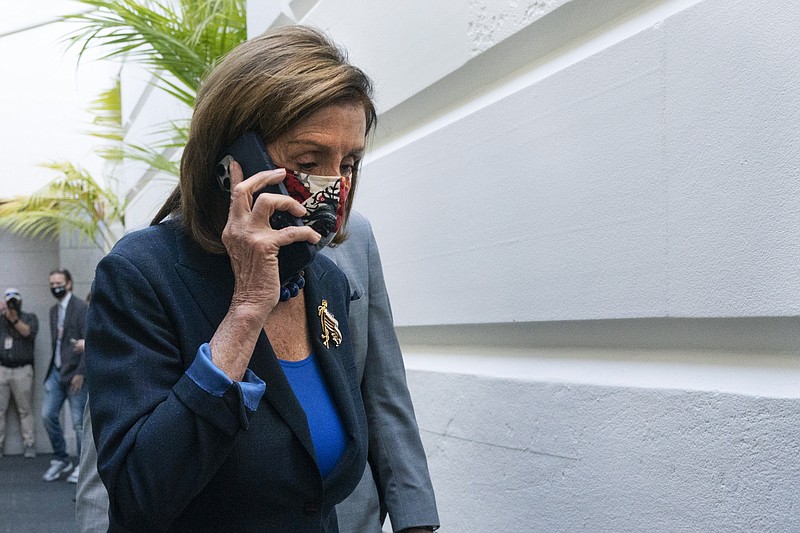 WASHINGTON -- When President Joe Biden proposed a massive expansion of federal services for Americans this year, he laid out lofty stakes -- not only for his own presidential legacy but far beyond.

The imperative, he said in an April address to Congress, is to show "that our government still works -- and can deliver for the people."

It was an apt pitch for the long-held Democratic vision of government as a force for good, and for the idea that Washington has an obligation to improve the lot of Americans held back.

But five months later, the capital is locked in an intra-party showdown over the president's agenda that underscores the larger question of whether Democrats can keep their pledge to make government make things better for people.

"For the last few decades, the country has seen that government struggled to deliver in a way that affects their lives," said Democratic strategist Jesse Ferguson, who advises groups that support pieces of Biden's agenda. "We have to show that there is a role for government in delivering for people who are working for a living."

This is the bedrock question as Democrats struggle to come together behind a $1.5 trillion to $3.5 trillion package that would raise taxes on corporations and the wealthy, and use that money to expand government health care, education and climate change initiatives. The debate has also delayed action on a $1 trillion public works bill that has stood to be one of the rare bright spots of bipartisanship in Washington.

In the closed-door meeting Friday with House Democrats, Biden tried to rally his party behind a common strategy, warning them not to squander the opportunity on the legislation, and reminding them that the world is watching to see whether democracy can deliver, according to a person familiar with his remarks who was not authorized to speak publicly about them.

White House officials contended that the disparate Democratic coalition -- which holds the slimmest of majorities in Congress -- was closer than ever to reaching a deal, after successive rounds of closed-door talks and public pronouncements from lawmakers. And they argued the American public will judge the results not by the messiness of the legislative sausage-making, but by the eventual benefits once new government programs are enacted.

In public and in his private conversations with lawmakers, Biden has framed passage of the two bills as his party's best chance to make the case for government action as a positive force in Americans' lives. To prove it can still do big things.

To be sure, Biden already has managed to push through a $1.9 trillion economic relief bill and has leveraged the full force of the federal government to distribute COVID-19 vaccines in an effort to bring the coronavirus pandemic under control.

But the country remains in a "tough spot," in the words of former Secretary of State and presidential candidate Hillary Clinton.

Biden "is really trying to kind of fight against all of these trends, you know, to come up with legislation that will make a difference in the country, show people that our government can actually work again, instead of being in a constant state of paralysis and an absolute, you know, nothing to show for it," she said Thursday at a conference organized by The Atlantic.

In his private talks with legislators, Biden has suggested a Democratic defeat on the current bills would be a gift to Republicans, empowering a party that he has judged a threat to democracy itself. Defeat, he has warned, would embolden the same forces who tacitly blessed the origins of the Jan. 6th insurrection and are now balking at helping to lift the national debt ceiling to avoid a government default.

The ramifications are likely to filter through ballot booths for years -- in this fall's Virginia governor's race, where Democrat Terry McAuliffe is largely aligned with Biden's agenda in his race against Republican Glenn Youngkin. In the midterm elections next year, where Democrats will be defending their slim margins in the House and Senate. In 2024, when the country will decide whether to ratify the Democrats' approach or veer rightward in the presidential race once again.

Beyond politics, Biden has portrayed the success or failure of his agenda as an inflection point for the United States, determining whether it has the investments and policies to remain the world's leading economic and military power.

To believe Biden and his team, the big safety net bill is a make-or-break moment for the country:

If it fails, child poverty in America doubles. Expanded health care, education and other federal programs touching the lives of millions are at risk. Efforts to tackle menacing climate change are limited. The IRS still lacks the money to provide basic customer service and enforce tax laws on the wealthy. Internationally, the government falls short in foreign investments, allowing China a smoother path to becoming a dominant world power.

"People want to see their government doing things," said Rep. Danny Davis, D-Ill. "And I think if they go to vote in midterm elections, feeling that government has done things for them, that benefit them, then I think they will respond in favor to the policies and practices of that government."

Republicans, unsurprisingly, frame the question in an entirely different light.

"There's no doubt government can do things," said Rep. Brian Mast, R-Fla. "But can they do it better than you can do it with your money or I can do it with my money? This is a moment where government is saying to the American people: 'You do more with less. And we'll do less with more.'"

The debate over the how much government should or shouldn't do is not new.

Biden was born as the New Deal was bearing fruit under Franklin Roosevelt, and he was a young adult when the Great Society took shape under Lyndon Johnson. As vice president, he whispered in President Barack Obama's ear that his big new healthcare law was a big deal, albeit in more colorful language.