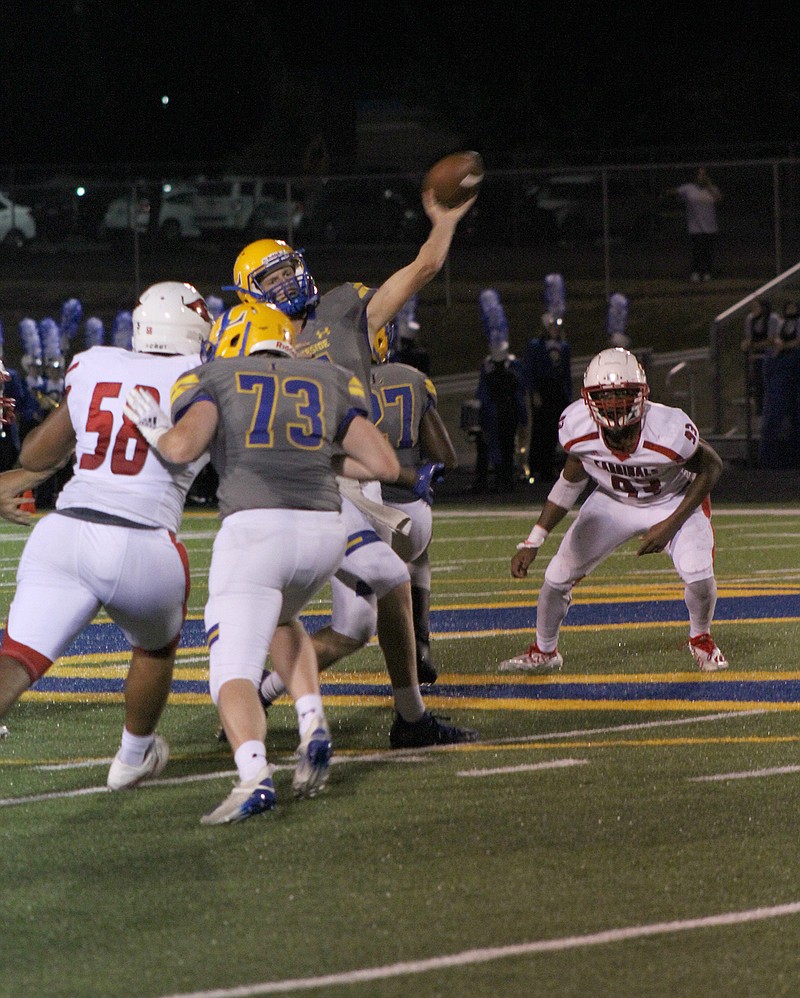 Lakeside quarterback Jordan Mills throws up a pass during a Sept. 24 game against Camden Fairview at Lakeside. The Rams travel to Texarkana today. - Photo by James Leigh of The Sentinel-Record

One thing is guaranteed tonight in Texarkana -- either Lakeside or Texarkana will pick up its first conference win.

Lakeside and Texarkana are joined by DeQueen as the only teams without a conference win in the 5A-South with Hot Springs and Hope sitting in third and fourth behind the Cardinals and Panthers, who face off tonight to determine the lead in the conference standings.

"That's been a tough matchup for, and will be a tough matchup for a lot, a lot of programs," Rams head coach Jared McBride said of Magnolia and Camden Fairview. "So we expect to have a good close battle with Texarkana. I think we're a lot alike offensively and defensively, and it should be a good game."

McBride said that the key to this week's game is to get a clean start.

"You know, get a good start and to put pressure on them and help them make the mistakes," he said. "I think if we get behind and can't get going, it may be a tough night for us. But for us, our goal is to start fast and just to execute and put some pressure on them."

Lakeside has plenty of offensive weapons to choose from to get off on the right foot. Senior quarterback Jordan Mills is 76-for-131 for 1,370 yards and 13 touchdowns so far this season against just three interceptions. He is averagining 274.0 yards and 2.6 scores a game and 18.0 yards per completed pass.

Sophomore Braylen Russell leads the team's ground game with 70 carries for 388 yards (5.5 yards per carry) with five scores and two century games with classmate Zach Garrett tallying 106 yards on 13 carries and a touchdown.

Chase Cross is averaging 113.4 yards per game with 23 receptions for 567 yards and five touchdowns. Brock Garner has 12 catches for 229 yards and four scores while Kyler Wolf has 221 yards on 15 catches and two touchdowns.

"They're big and physical, you know, and that's given us trouble this year, but I think our kids will come out and play hard and be up for the challenge," McBride said.

McBride said that offensively the Razorbacks are primarily a Spread team, but they will get into some other formations, including I formations, in the red zone.

Defensively, the Rams are led by junior Caleb Weed with 34 solo and 15 assisted tackles while Christian Bell has 32 solo and 16 assisted tackles. Lakeside has 13 defenders with double-digit tackles, nine of which have 10 or more solo tackles.

"They spread the ball around," McBride said. "They've got two running backs that are running for them -- one big and physical and one little more of a scat-type guy. Quarterback will hurt you, and they run some Wildcat stuff where they'll put an athlete back there also. So, yeah, I expect them to kind of spread it around, and we've got to be able to defend all around."

With five games under their belts, the Rams are much like any team at this point in the season as far as health, McBride said.

"We're a little banged up, but it's middle of the, middle of the season, so (you've) kind of got to expect that," he said. "We've got two or three kids out right now, but hopefully we'll, we'll get a few back later on in the season and be full strength. But, yeah, we've got our bangs and bruises like everybody else."

"We feel good," he said. "You know, (we were) able to get a good week of practice in, and we like the matchup that we have going to Texarkana."

Kickoff at Razorback Stadium is set for 7 p.m.