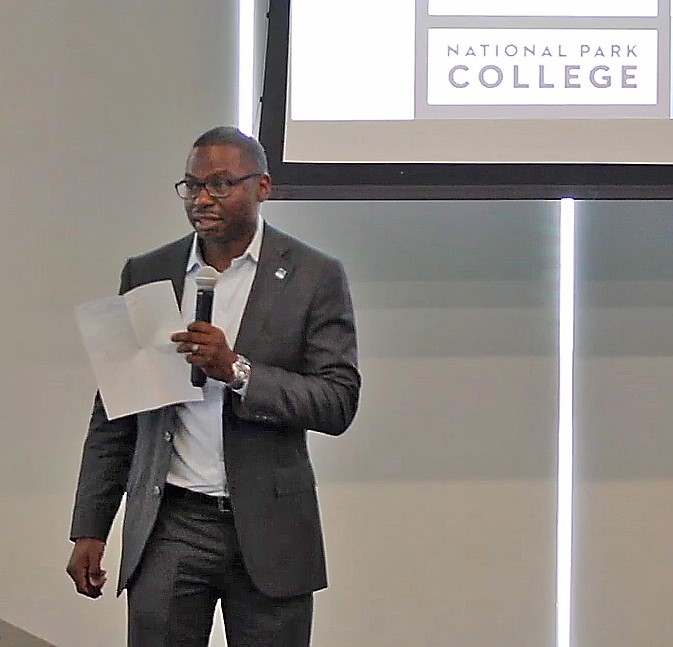 Jerry Thomas, vice president of student affairs and enrollment management, speaks at the first panel forum for the school’s 25-year Master Plan Monday in the Student Commons Building. - Photo by J.P. Ford of The Sentinel-Record

National Park College heard from its own employees Monday during its first 25-year Master Plan forum, with teachers and staff discussing the overwhelming need for more on-campus housing for students.

Kelli Embry, NPC vice president for administration, said one of the college's biggest challenges right now is the lack of student housing and students not being able to have the experience of living on campus.

Jerry Thomas, vice president for student affairs, also stressed the need, especially with the expected student growth population, noting the college is going to have to take a detailed look into all areas of the plan and make sure they accommodate that level.

"We have to be attractive," he said. "We have to be competitive. Not only our infrastructure has to be held attractive, but our offerings -- what we offer students in terms of student life -- that has to be paramount and it's very important. And it goes into that selection of when students make a choice to where they want to earn their academic education."

Thomas noted how a central theme of "engagement" among students on campus is vital to keeping the college at a high level of performance and the new student dormitories will go a long way to providing that.

"Last fall the occupancy was 180 residents but when we started leasing this past January, when we opened leasing up, by May we were already oversubscribed. We have an outsized demand for housing on our campus right now," he said.

What this tells them is that students want to live on campus and want that engagement, Thomas said. "They want to be with their friends, they want to study, they want that energy, and this answers that by helping build back that community."

Thomas said they also want to build on the athletics programs and expand the facilities. He said the roughly 180-student athletic program shares facilities with Hot Springs High School, but having all facilities on campus will bring much in the campus student population itself, while strengthening the campus atmosphere.

Embry, who serves as chairman for the planning committee, thanked all of the employees for coming to the inaugural meeting and noted her excitement in being able to show them the full, proposed master plan.

"A (plan) that we could all look at and think about our future, and just dreams, and what we want to see this campus look like. I know many of you have worked with me for -- I've been here 10 years, and a lot of you were here before me -- and to see how it's evolved so far and then to think about what it's going to look like in the future, for me, especially, is extremely exciting," Embry said.

There will be several opportunities for providing input and feedback, she said, noting that aside from posed questions and discussions at forums, completely anonymous options are also available through paper and electronic forms.

Embry said the present architectural renderings from Lewis Architects and Engineers represent the first draft, and the final, overall layouts will probably look much different.

Wade Derden, the college's IT Department administrator, said a main, fundamental focus on campus will be the overall electrical infrastructure and technological load capabilities. While he noted the library will be a central hub, he said virtually all corners of the property would need to allow for sufficient electrical output.

"Well, first of all, obviously, we have a lot of instructional spaces on this campus that were scattered around in different areas, and one of the elements of this vision is to try to consolidate those into more compact areas, and to create more space for the student population," he said. "We want to think ahead and try to be flexible for students and create flexible learning spaces where they can go to class, they can plop down in a nice comfy chair, and plug in and have access to whatever they need right there."

Derden said another aspect that goes along with the technological is updating career and technical trade facilities for growth -- both in terms of space, equipment and tools.

NPC President John Hogan noted his excitement for the plan.

"This is our opportunity to continue to alter this communication piece that we want to continue building excitement around, get the community involved in that excitement, so this is your time," he said. "You have an opportunity to help the college dream big and to paint a picture for future students, current students, board members and employees about what NPC aspires to become."

For more information about the plan and upcoming forums, visit https://bit.ly/309tR1P. 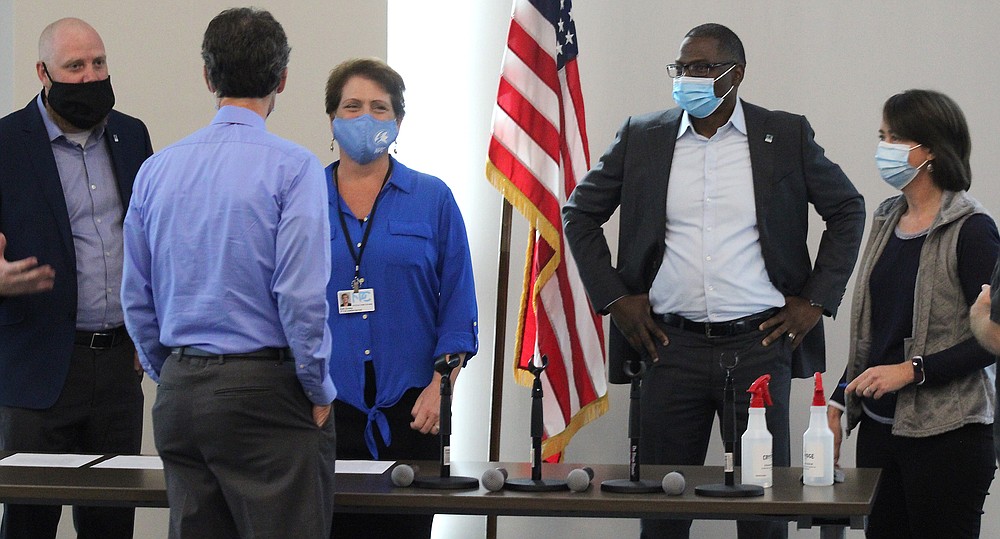 National Park College employees visit after the first panel forum for the school’s 25-year Master Plan Monday in the Student Commons Building. - Photo by J.P. Ford of The Sentinel-Record