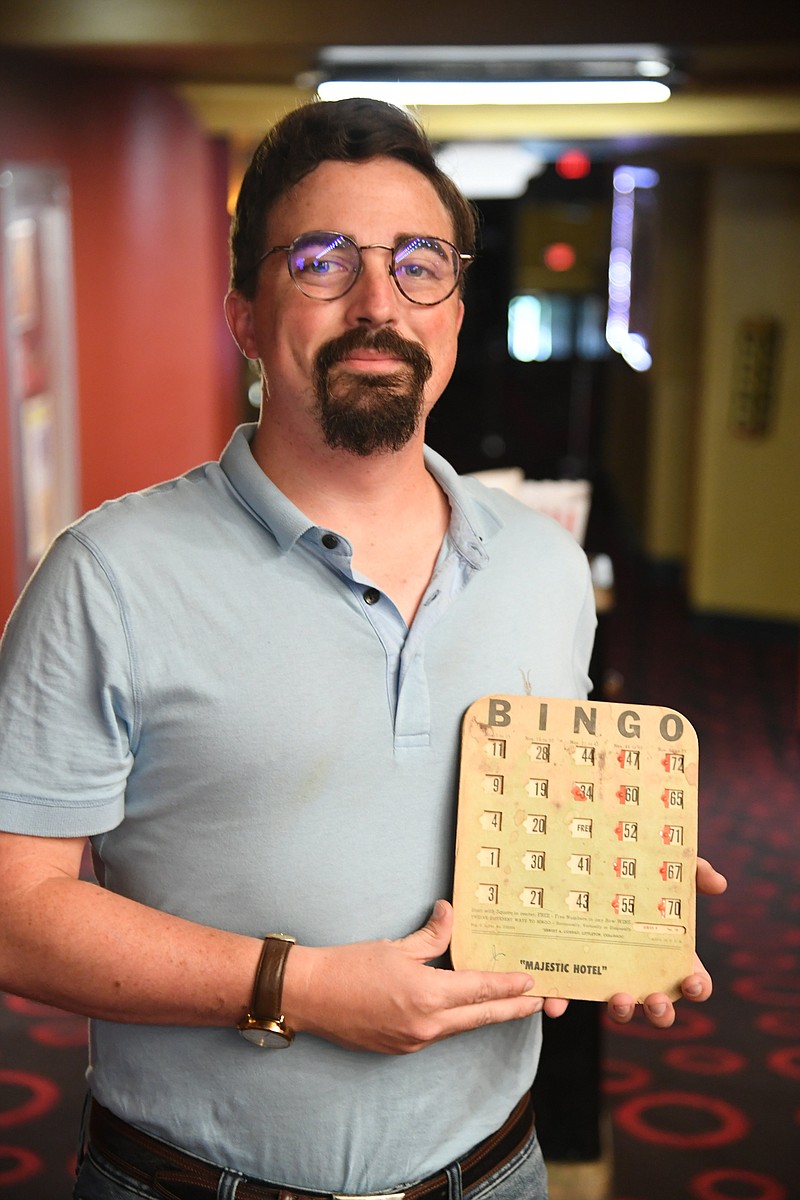 Michael Schwarz, director of "Forever Majestic," holds a bingo card from the hotel while standing in the lobby of the Malco Theatre. - Photo by Tanner Newton of The Sentinel-Record

After seven years in the making, "Forever Majestic" debuted at the Hot Springs Documentary Film Festival on Tuesday, with an encore screening set for today at 11 a.m. at the Malco Theatre.

"The debut of the movie was on Tuesday and it was way better than I was expecting. There was a lot of people there, I think it definitely capped over 200, and from what I can understand, the movie was very well received," Schwarz told The Sentinel-Record.

"The whole point of the documentary is to kind of ask that question, or answer that question, what makes your city worth living in, and there's a lot of historic buildings here in Hot Springs including the former Majestic Hotel. That's the main subject of the film, but it also sheds light on some of the other maybe next Majestics that might be in town, including the Arlington, which is the sister hotel, the Medical Arts Building -- although that's now being salvaged and saved by the Patels, which I'm very excited about -- but the Army-Navy Hospital is probably the top on our list right now because that is currently abandoned and could easily fall into the same traps the Majestic did," Schwarz said.

"Even though the events take place from 2014 to 2016, they are very relevant to today because of what continues happen in this town with historic buildings," he said.

Originally from Oklahoma, Schwarz said he came to Arkansas to study digital filmmaking at the University of Central Arkansas, where he started the website Abandoned Arkansas, which has since changed into Abandoned Atlas. He said the website "works to help protect these historic icons and also to help connect developers to them because there might be someone who believes in Hot Springs or what's going on here, and they just don't know or any other town in either Oklahoma or Kansas, which are other states we tap into."

As for the Majestic, Schwarz said he did get to experience the hotel before it caught fire.

"I knew about the hotel a few years before it caught on fire," he said, noting "it was one of my draws to Hot Springs."

"When you walked into that hotel, it was like everybody had just got up and left. There were chandeliers, there were tea cups, silverware, Persian rugs, carpets, beds, I mean everything in that hotel. It looked like you were walking into the Arlington, but it had been shut down for 10 years. It was crazy how much was left behind, and that was my initial draw to the hotel," he said.

"Once the fire happened, I knew I wanted to make at least a 10-minute documentary that showcased the history," he said, noting once he met people who wanted to salvage the remains of the hotel "that's when I knew that I had a documentary on my hands and wanted to pursue that story."

"One of the misconceptions in town was that the Majestic was completely destroyed by the fire, which it was not. I know a lot of people called us crazy for trying to save a burned down building, but there was an entire three other buildings that were unaffected by the fire, and I still firmly believe that the Majestic could have been brought back to life had the right developer been approved," Schwarz said.

While he has made shorts before, this was his first feature-length movie. When asked if it was intimidating to make a full-length movie, Schwarz said, "had I known it was going to be a feature from the start" then it would have been. What was intimidating though was "how delicate the subject is, because there are so many people in town who have cherished memories here," he said.

"If we can look at some of the things that happened at the Majestic, we can take those events and we can look at maybe early signs of it happening again maybe at the Army-Navy or at the Arlington or some other iconic places that might be next," Schwarz said, noting how appropriate it was for the movie to premiere at the Malco Theatre.

"The Malco is actually listed on https://abandonedar.com/ and shows pictures of before it was renovated, and I've got to say Maxwell Blade has done a wonderful job, and it was only perfectly fitting that the screening takes place at a renovated theater, I mean I couldn't have asked for a better venue," he said.

Those unable to make today's screening of the movie will have more chances to see it in the future.

"There is one more screening here at the Hot Springs Documentary Film Festival (today) at 11 a.m., but there will be numerous other opportunities to watch the film once either I release it online, (at) other festivals or I think I am gearing up to have another screening outside the festival, but here in Hot Springs," he said.

"The Majestic Hotel is something that means so much to me and to so many other people, and I just want to make sure that the audiences, whoever watch this film, know that this is coming from a place of love and that I want nothing more than to see Hot Springs thrive and be a big part of America's future and a great place for tourists to go, and I really just don't want it to be misconceived, because I really do love this town, and I love the people in it, and that's what we do at Abandoned Atlas."