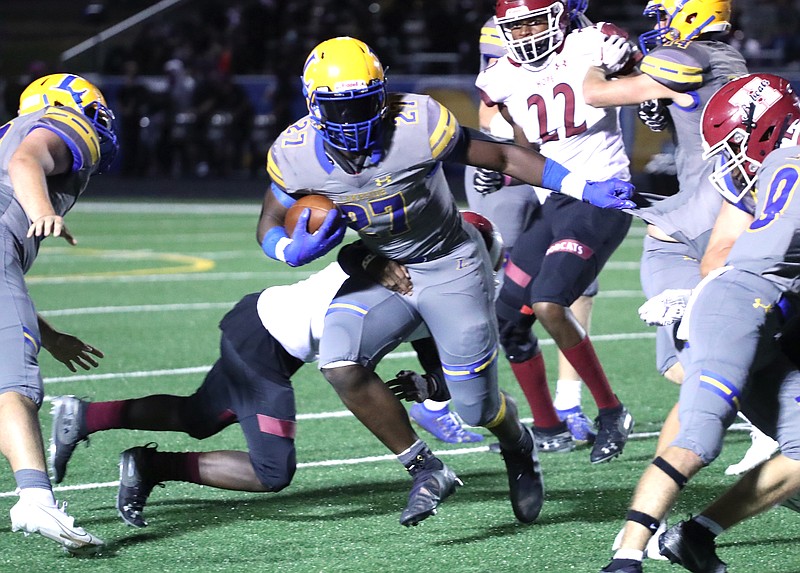 Lakeside's Braylen Russell (27) runs the ball against Hope Friday at Chick Austin Field. - Photo by Richard Rasmussen of The Sentinel-Record

Lakeside may have started off slow, but the Rams put up 29 points in the second quarter alone to take a 43-25 homecoming win over Hope Friday night at Chick Austin Field.

Though the Bobcats took control early, the Rams got hot just after the first 12 minutes of the game and never let up.

"We started a little bit slow, but it was my fault," said Lakeside head coach Jared McBride of having his team dialed in on homecoming night. "It was homecoming week and, you know, just trying to get our kids focused. But they bounced back and had a great second quarter and really put it on like I knew that they could and played good team football."

After a scoreless third quarter with Lakeside maintaining a 29-13 advantage, Rams senior quarterback Jordan Mills hit senior receiver Brock Garner on the right sideline, who ducked a tackle and went on for a 26-yard pickup to midfield.

Mills kept to the air, finding sophomores Skylar Purifoy and Kyler Wolf for short pickups while standout sophomore running back Braylen Russell took his turn at a pass, breaking two tackles and spinning his way 23 yards into the end zone at 2:03 into the fourth quarter. Senior kicker Andrew DeGrasse, who went a perfect 5-for-5 on PATs, nailed the kick to make it 36-13 Rams.

Hope responded with 7:42 remaining when senior Ammorrion Dempsey connected with senior receiver Tyzhan Jones from 18 yards out, though the 2-point attempt failed. The Bobcats continued to battle back with with their speed, scoring once more at the 2:40 mark when sophomore quarterback Tyler Patterson found Jones, who got loose and went 83 yards for the touchdown.

After another failed conversion by the Bobcats, Lakeside wasted no time capping the win in big fashion. Taking the kickoff at their own 45 yard line, Mills connected with Wolf on the first play from scrimmage to set the final.

Though both teams had their share of turnovers Friday night, Hope head coach Phillip Turner said it played especially detrimental to their offensive drive. A Bobcat fumble at midfield nearing the end of the first quarter led to the Rams' first score of the evening.

"Turnovers, that's the big -- that's been our Achilles' heel all season," said Turner. "We've been hurting ourselves. I mean, we've been playing some good football teams, but we hurt ourselves and don't give ourselves a good chance to win ballgames. We're always trying to fight back. So I've got a young team, but we've got to overcome turnovers. Our motto -- we don't quit. We're going to fight. Our kids know they made mistakes the first half, and we've just got to keep grinding. Just keep grinding. I tell 'em I love them. It's a ballgame. Have fun. Win or lose -- hey, we pray the good Lord will wake us up in the morning."

McBride knew of Hope's speed and athleticism, along with the fact that a win was not going to be easy Friday night.

"Yeah, they're a fast football team," he said. "They play hard, and coach Turner does a good job with them, and I'm just proud of our kids and being able to defend and win the game on homecoming night. We knew it was going to be a four-quarter game, and our kids came out after half and did what we wanted them to do, got a stop and put the ball in the end zone, and they just finished and played well. And I'm proud of them."

The Rams got off to a rocky start when they fumbled on their first series to give the Bobcats solid position at the Rams 27 yard line early in the first quarter. The quick senior running back, KeJuan Booker, took advantage and tore up the ground for gains while junior Jaqualin Watson took it in for the first score of the night just under 4 minutes into the game.

The Bobcats' defense continued to hold the Rams before an 11-play series that carried over into the second quarter got things going for Lakeside. Russell led the Rams rushing effort into the end zone at the 9:52 mark of the second and then later, after a perfect pass from Mills to Wolf in the left corner of the end zone with 7:27 remaining, Russell came back with two minutes remaining to bulldoze his way in to make it 21-7 Rams.

Hope answered shortly after with a 62-yard touchdown run from Dempsey before Garner reeled in an acrobatic catch off a bobble in the end zone with 16 seconds remaining in the first half.

Patterson went 3-for-11 passing for 111 yards while Dempsey went 3-for-6 passing for 28 yards passing while rushing for 120 yards. Jones had 141 yards receiving, and Booker had 114 yards rushing.

The Rams travel to DeQueen next week while the Bobcats go to Camden Fairview.