COVID-19 booster shots ready to go this fall as planned 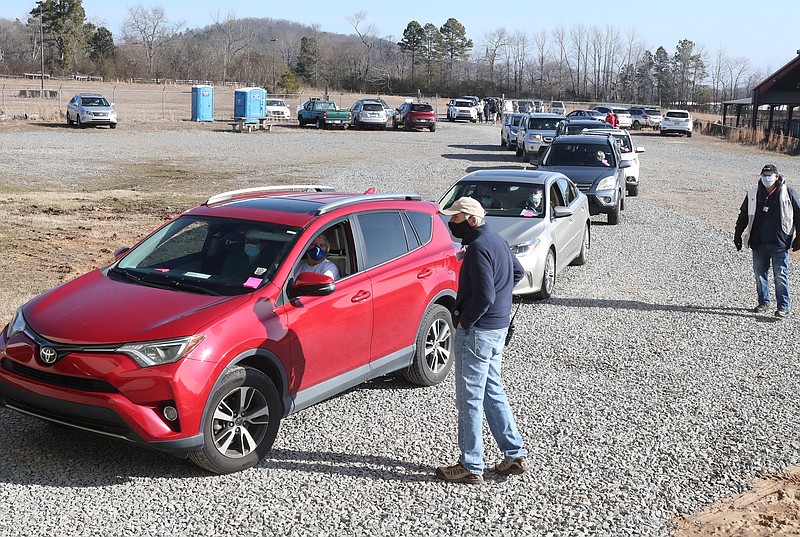 Cars line up at the Garland County Fairgrounds on Feb. 2 for a COVID-19 vaccination clinic. - File photo by The Sentinel-Record

He said all of the local booster clinics are scheduled and posted and are prepared to administer the shots this fall for those who meet the requirements.

As to recent media reports that some people have faked their status as immunocompromised in order to receive the booster shots early, he said that is true, but there is also a lot of misunderstanding.

"I understand it, just from the fear alone of it," he said.

"We do have people that will either misunderstand it and say that they're immunocompromised when, you know, back in January they were considered immunocompromised, which is what qualified them for their vaccines before other people in general," Turner said.

"Diabetes, for example, was a qualifying factor to get the vaccine early, but that's not the same type of immunocompromised that we're talking about now because people who are under the current qualifications of immunocompromised, when we gave them their first two shots, they basically didn't have the full response to their first two shots. And so this isn't a -- for terminology's sake -- the people who are currently eligible for the vaccine; it's not considered a booster. This would just be the completion of the initial series with another dose," he said.

A booster shot is really more so of a booster once the vaccine's effects are starting to wane, he said, noting that then "you would give a booster to help to boost the memory cells to cause a prolonged effect of the vaccine."

While some people fill their prescriptions with the pharmacists and are regulars, Turner noted the process is fairly simple.

"Some people, you know, they'll fill prescriptions with us and that's one way (to tell if they meet the criteria) but for the most part, we've been instructed not to police it," he said. "We don't have to police this; what we do is we educate the public whenever they do come up to us, either out of fear, thinking, 'Oh I need to try and get this now,' or misunderstanding, or they do try and tell us, 'Well I am immunocompromised,' and they'll check all the boxes to try and claim so.

"But for every single person that comes in for a third dose, I do make them perfectly clear that you're not doing yourself any favors by trying to get this vaccine early because all that's going to do is just prolong when you're able to get the actual booster. Because if you got your third dose right now and you didn't need it, well that was considered a continuation of the initial series and so your booster shot would then be actually eight months after this one. So you may have gotten an unnecessary vaccine and there was just no benefit to it," he said.

"And people, once I tell them that, perfectly understand. There's some people will adamantly ignore it but that's a very small percentage of people. For the most part, once I tell someone that, they do realize that yes, I should just wait until the eighth month, which might just be 30 days away for them."

Turner said the state has been a little more hesitant to order vaccines and it's been the same with him and other health care professionals.

"You know, we haven't, until two days ago, ordered a single vaccine shipment since March," he said. "And the state was holding off on ordering any vaccines because demand was dropping and now that the vaccines have had their beyond-use dates extended past what's printed, we suddenly do have a lot of vaccine available again. So whereas (a week ago) we had 11,000 vaccines that had just expired a few days prior, we now have 11,000 vaccines that are no longer expired. And they're extended through October and November, which actually allows us perfectly to meet all of the booster shots that we had planned."

On the treatment front of the COVID-19 battle, after formerly having to be ordered by a doctor, monoclonal antibodies can now be prescribed by pharmacists in Arkansas as ICU units throughout the state remain at capacity.

Turner said the Arkansas State Board of Pharmacy has now provided guidance to where pharmacists are able to prescribe monoclonal antibodies independently and still meet all of the requirements of the emergency use authorization.

"This increases access for people because we're able to, you know, maybe provide someone treatment earlier than they would have if they had to wait for a hospital to do it," he said. "And this isn't stepping on the hospitals' toes at all because they're clearly overwhelmed as is. There's not a single ICU bed in the state."

Turner said this may be the perfect time to do a public safety awareness campaign on texting and driving, because "everything is instantly more dangerous now if you can't go to a hospital."

"But with the monoclonal antibodies now, we're prepared to basically -- any COVID test that we do, we're able to sign off, on starting treatment for the patient," he said. "And just as quickly as before, starting treatment from a doctor's orders, we're now no longer waiting on a doctor's orders. We still take referrals from physicians in the same way that a prescription ever would have been sent to us by a provider, but now we're also able to independently write the prescription for the treatment."

As of Tuesday, Garland County was listed as having 41.1% of its population vaccinated, or 80,513 people with roughly another 1,000 added for Tuesday.