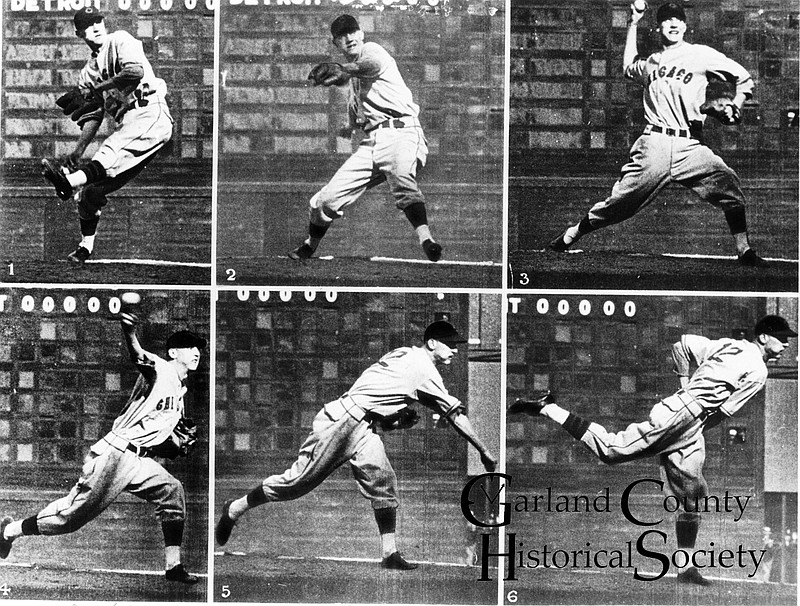 Warneke pitching for the Chicago Cubs in the 1935 World Series. Photo courtesy of Lonnie Luebben.

Most people are lucky to have success in one career, but Lon Warneke shone in several. Warneke’s talents and character took him from a small farm near Mount Ida to the World Series to the county judge’s office.

Born in 1909, Warneke grew up on a small farm a few miles from Mount Ida, where he learned to love hunting, fishing, and playing baseball for the Mount Ida High School team.

Sportswriter Roy Stockton gave him his nickname, “The Arkansas Hummingbird,” for his “sizzling-fast and darting form of delivery.”

In 1932, he led the National League in victories (22), earned-run average (2.37) and winning percentage (.786). He pitched in World Series for the Cubs in 1932 and 1935 and tossed a no-hitter for the Cardinals in 1941. After hitting the first triple and scoring the first National League run in the first All-Star game in 1933, he went on to play in four more of those classic match-ups. He ended his major league career with a regular-season 192-121 mark, ERA of 3.18, and 30 shutouts. After his playing career, Warneke was a National League umpire from 1949-1955. He is the only major leaguer to have both played in and umpired All-Star games and a World Series.

Warneke and his wife, Charlyne, made Hot Springs their base in the mid-1930s and, through the years, Warneke was a soybean farmer, cattleman, service station operator, feed store owner, and owner of a water conditioning company. Persuaded by friends to enter the race for county judge in 1962, he won by 192 votes (matching his 192 career wins). He was reelected by ever-increasing margins for the next 10 years, retiring in 1972 for health reasons. He died from a heart attack in 1976.

Perhaps the part of his job as county judge that most revealed his character was his work as head of juvenile court, which the county judge headed personally in those days. He said that “children need love and compassion and guidance” and worked hard to help them. He once told a reporter that he tried to “impress upon (young people) that everyone makes three names in this world. The first is his given name that singles him out from his brothers and sisters, the second is his family name that identifies him from other families in the community, and third, and most important, is the name that he makes for himself in the world and in the eyes of his fellow men — his reputation.” Warneke lived by those words, creating a reputation for integrity, loyalty, and kindness that is still remembered.

Whether he was calling square dances, playing the guitar, riding horses, or taking his grandchildren fishing, Lon Warneke shared his love of life with his wife, Charlyne, his son, Charles, his daughter, Lonnie (Luebben), his extended family, and his many friends. Charlyne once said that her husband felt Hot Springs “was the most wonderful place in the world.”

We’re lucky he felt that way and made Hot Springs his home, because “The Arkansas Hummingbird” was much more than a great ball player.