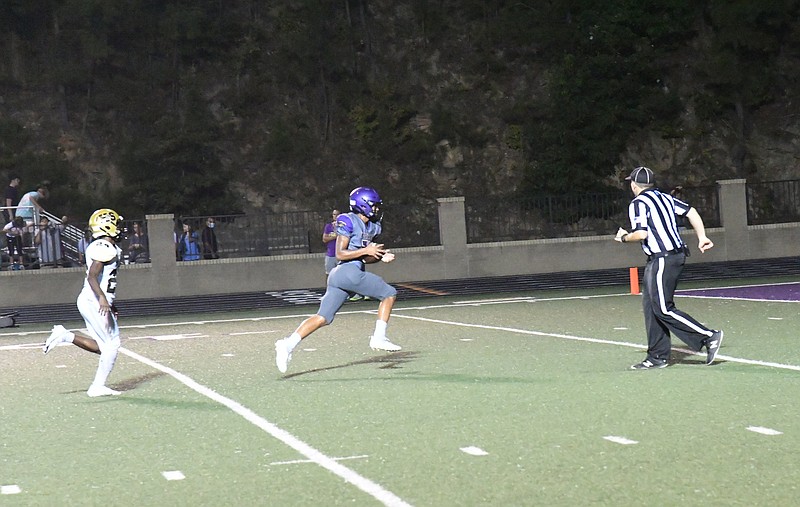 Fountain Lake's Kadin Hilton runs toward the end zone to score a touchdown against Hot Springs on Aug. 24. - Photo by Tanner Newton of The Sentinel-Record

Fountain Lake may still be "a little bit of the walking wounded," according to head coach Kenny Shelton, but the Cobras will be ready to play tonight as they travel to England to take on the Lions.

While some of the injured players from last week's game will be back in action as will some who were quarantined, there are still some who will be sidelined.

"We're really trying to get everybody as healthy as possible to be able to play," Shelton said. "We've got one young man back from quarantine (Tuesday); we'll get another one back (Thursday). You know, we still have a young man on concussion protocol. He'll be, he'll be done with that protocol on (Thursday), so he should be able to play. We have one guy that's out with some cracked ribs, that won't be able to play.

The Cobras (0-1) are going into tonight's game a little bit blind as the Lions have not had a chance to play either a scrimmage or a game. Their scrimmage was canceled due to players being quarantined, and Mineral Springs had to cancel last week's game.

"Fortunately, we played them last year, and, you know, talking to their coach, kind of sharing a little bit of, you know, what, loosely what our game plans were for this week," Shelton said. "So, I know that his numbers are low. I think he said they're going to have 19 dressed out. So I think we'll be right around 23 is, is what I'm thinking we'll have dressed out. But, you know, they're young team. You know, first game of the year for them, first contact. You know, they're gonna be excited to play at home and to play at all. So I know they're going to come out, ready to go."

The Lions run a Wing-T offense, but they also have a shotgun package that opens up a passing game for them as well.

Defensively England likes to load the box, using a 4-2-5, but Shelton said that the team will also move up a linebacker for a 5-2 look.

"We've got to kind of take advantage of some openings that they give us and execute," he said.

The Cobras took a 54-18 win over the Lions last year at Allen Tillery Field, but the Cobras are more beat up than they were a year ago, playing England for their first game of the season after having to cancel their season opener against Hot Springs due to quarantine.

"At the end of every practice, we've got to evaluate, you know, if anybody needs to be looked at," Shelton said. "We're trying to be somewhat physical in practice, but not as much as we would like to be, just to try to prevent injuries, but we are still going in full pads. And, you know, we're just real quick on the whistles and trying to minimize too much contact, which is not something we like to do. But that's just necessity right now to keep people as healthy as possible. But you know, same thing I told you to begin the season with, if we have everybody, I truly feel that we're talented enough, with no injuries to still have a really good season and to make some noise in the conference. But that that comes with that big caveat of staying healthy."

"We saw last week how, how quickly the wheels fell off, and it wasn't just one wheel," he said. "It was, it was every wheel. And, you know, hopefully, we will not have to face that again, this year. Hopefully, we'll be able to, you know, weather the storm of injuries and continue to get in good shape. We're still not quite where I want to be, but... they're gonna slowly play their way into shape. And we're, you know, we're still conditioning. You know, we've got to look at, you know, that the heat has been a big factor. As far as conditioning, we're not conditioning as much as I would like, but we're still we're still doing a little bit. Hopefully, the heat will cooperate with us and will continue to, to get in better shape and keep the injury bug away."

The Cobras did work on their passing game some this week to try to open up some options in the event that they lose key running backs again this week.

"We worked some other young men to get some reps at those spots," Shelton said. "And, you know, we'll be looking at a little bit, a little bit more of a spray package, especially since I got Abe Rose, one of our receivers back. That helps out quite a bit and try to put to something very simple in where we can try to be able to move the ball a little bit so we don't have another issue of of all the running backs going down and kind of, kind of sewing out the offense."

Kickoff is set for 7 p.m. tonight at Gaylon Gibbs Stadium.