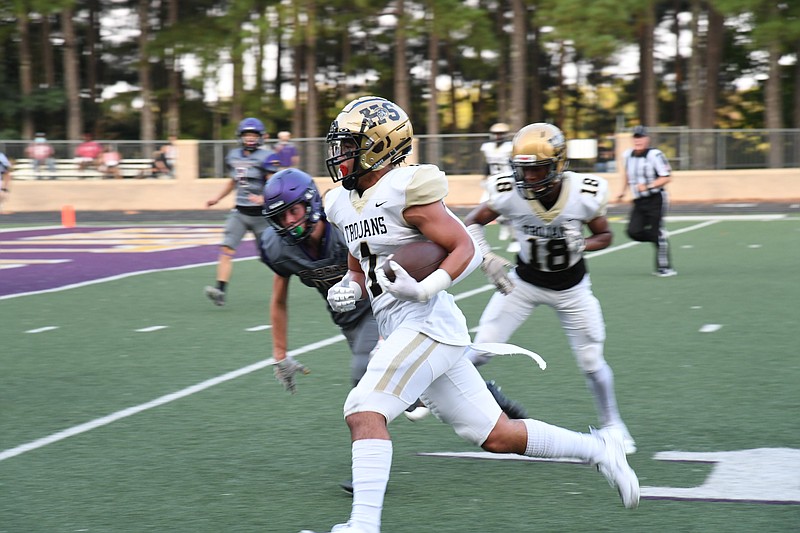 Hot Springs' Pierce Smalley runs into the end zone during an Aug. 27 win over Fountain Lake. - Photo by Tanner Newton of The Sentinel-Record

Hot Springs' annual contest against Arkadelphia has been fairly one-sided recently, but the head coaches for both teams expect to see better things from the Trojans this year.

The Trojans (1-0), coming off a 52-7 win over Fountain Lake, are coming into the game with plenty of energy.

Arkadelphia head coach Trey Schucker said that the Trojans are "much improved from last year."

"They're just more experienced on the field I think from last season," he said. "They're athletic. You know, on defense, they've got a really good front, front d-line, and they've got some skill behind them in the secondary. And on offense, I think their quarterback is much, much improved. He's got a great arm; he's versatile. He's not afraid to run the ball at times. ... They've got two good running backs that they like to use and that run the ball really well. ... They've got a couple really nice receivers that catch the ball in space and got really good speed."

Last week, the Badgers (0-1) struggled against Camden Fairview, falling 41-21 at home, but Schucker said that the team has been working to eliminate some of the issues that plagued them in their opener.

"It took us a long time to find some rhythm, you know," Schucker said. "We'd be really good in one area, and then there'd be a different area to make a couple mistakes, and it just kind of threw our rhythm off on offense. And so it took us a while to move the football and be consistent, and that was just the biggest thing of the night. We were inconsistent. I thought our defense played really, really well early.

"You know, we -- the offense gave them a touchdown, and that really swung the momentum. And we played from behind the whole game. And, you know, Camden had the momentum the whole game. So early, I thought our defense played really well. You know, we did have some players that that didn't finish the game. Couple of those players, or two way players and so late in the game, the second half, it really affected us on both sides of the ball. So if we have those players, I think, you know, the outcome isn't as great of a margin."

The Trojans had their own struggles last week against the Cobras, getting called on 19 penalties for 172 yards.

"It's just the little things, man," Burnett said. "That's the good thing about it. It's not, it's not stuff that we couldn't fix. Everything that we messed up on is all fixable -- the false starts at receiver. ... My thing is if it was one of those flags where you're being physical and super aggressive within the realm of the football rules, I don't have a problem with that."

Arkadelphia is not without its own set of weapons including Jaishon Davis, a 6-2, 230-pound senior running back with at least four Division I offers.

"Of course, they've got that huge running back, man," Burnett said. "That guy's 6-2, 230. Their quarterback (Donovan Whitten) is a playmaker, too, but our biggest thing is we've got to do our jobs. All 11 guys got to run to the football and then we've got to tackle because they've got a couple running backs.

"Number 6 (Davis), he's a bigger guy, downhill, power that can run through you. Then you've got number 4 (Braylon Bailey), who is the running back. You've got to tackle him in space. Quarterback is another big body. Then you've got one of the most physical guys out there at receiver, number 24 (Alex Loy), so they've got a great weapons. We've just got to be up for the challenge, man."

While both coaches said that they had some players that sustained some injuries during last week's games, the teams as a whole are healthy and ready for tonight.