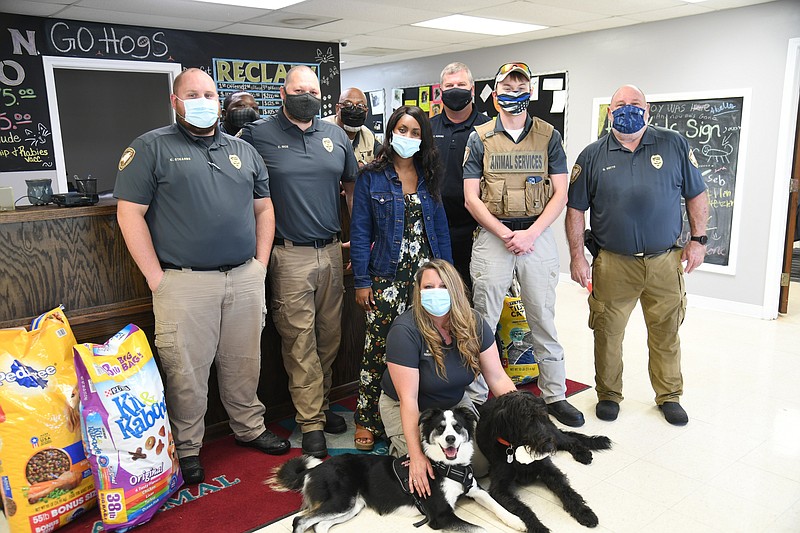 Michelle Stone, front, Hot Springs Animal Services coordinator, with dogs Jazzy, left, and Loki, with the staff of Animal Services, who are collecting donations for pets affected by Hurricane Ida. - Photo by Tanner Newton of The Sentinel-Record

"I really want to help the citizens of Louisiana. They have lost their whole lives. Their pets are all they have left. I can't really help out with their home belongings, so I thought, why don't I help out with their pets?" Michelle Stone, Animal Services coordinator, said.

Stone said she "stayed up for two hours Monday night thinking 'What can we do?' I came to our director on Tuesday and he was like, 'Let's do it.'"

Many of the animals end up displaced and taken to animal shelters, Stone said.

"I'm sure that a lot of the shelters are already full, before helping the citizens of Louisiana. We at Animal Services have animals (admitted) every day. We have five to 20 in a day, and we know how it feels. Anything we can do, we are happy to do it."

Dr. Lesa Staubus, a rescue veterinarian with American Humane in Oklahoma, told The Sentinel-Record on Thursday that she had just left Baton Rouge on Wednesday. "We were bringing in our 50-foot rescue rig to transport animals out."

Staubus said she took a group of cats, some of them very young kittens, to Edmund, Okla., from Companion Animal Alliance in Baton Rouge, where the majority of the devastation took place.

"People are scrambling down in those lower parishes," she said. "They still have no electricity at all. It takes days for the storm to settle enough and the population to start to respond. Everyone is just in panic mode after the storm just to keep their heads above water. It's taken days for the plans to start to gel and that is starting to happen. There will be temporary shelters set up, but it's still firming up. It hasn't taken place yet. Efforts will be made to keep (pets) as close to home as possible for owner finding, but sometimes, lack of infrastructure makes that really hard to do."

Donations will be given to each shelter that has 100 animals or more displaced from hurricane Ida.

"I'm getting with the Humane Society of the United States, and I've gotten with Best Friends Animal Society," as well as the American Society for the Prevention of Cruelty to Animals, Stone said.