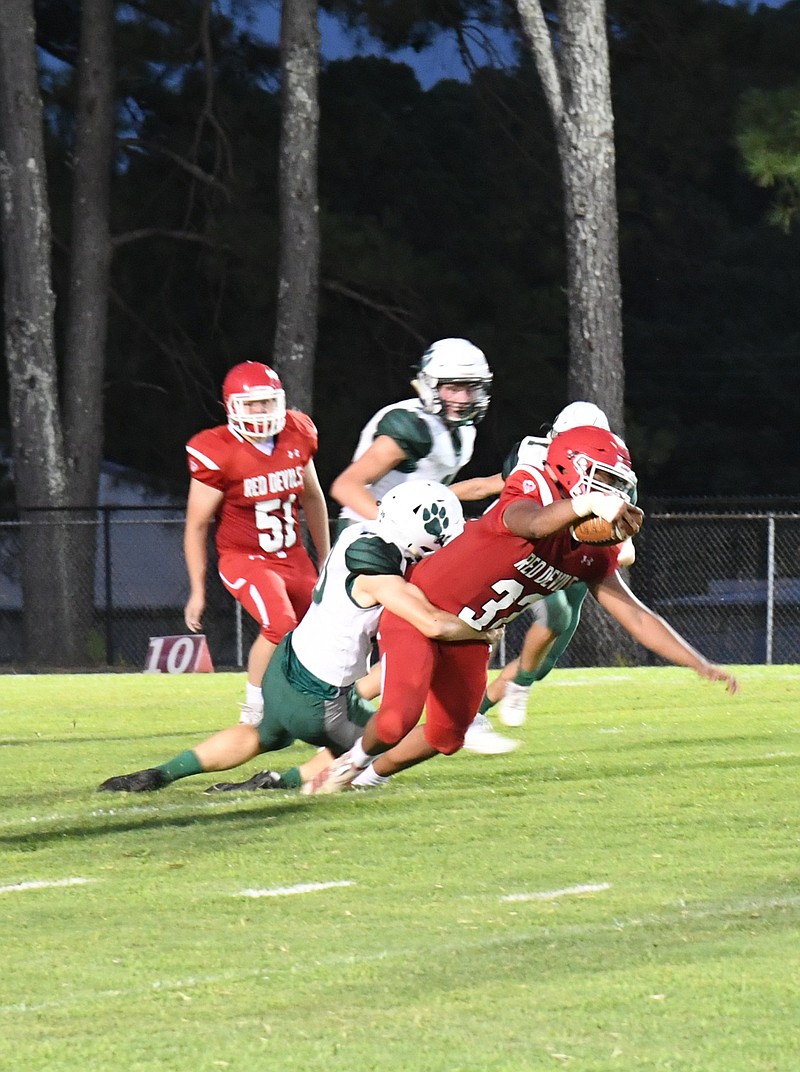 Mountain Pine's Dayjon Matlock (32) is tackled by Episcopal Collegiat's Layne Keck during an Aug. 28 game at Stanley May Field. - Photo by Tanner Newton of The Sentinel-Record

Mountain Pine is in an unusual situation this week.

The Red Devils (1-1) are essentially going into tonight's contest against Marvell-Elaine (0-1) blind.

"I don't have anything to give them as far as information on Marvell," Red Devils head coach Sam Counce said. "We didn't exchange films. They didn't send us one, but I talked to another coach that played them the first week at Woodlawn. Said they have a number two and a number eight that's real athletic. Said they try to line up with trips and doubles and try to break it out and run the ball. So I figure they're gonna be athletic and fast."

Coming off a 64-24 win over Marshall last week, Counce has been concerned about his players' mental state going into this week.

"You know, our job as coaches is to get them ready for the game," he said. "You know, if they think it's an easy game, you know, if you're a championship caliber team you, you take every week the same, you approach it the same, so, you know, that's kind of what we've got installed this week, just focus on ourselves, getting ourselves ready to play, and being the best we can be on Friday night."

Counce said that the Mustangs are based out of the Spread.

"They're more of a one back set, you know, with three receivers and things like that," he said. "Woodlawn beat them, but I think Woodlawn's pretty good this year, so we can't, we can't say, 'Since Woodlawn beat them, we should beat them.' And I feel like I said, they're gonna be, they're gonna be tough to handle as far as an open field and the speed and their agility. That concerns me."

With an opponent that is more focused on the pass game, Counce said that his plan for defense will be to use more of a zone defense instead of a man defense.

Like most coaches, Counce is concerned about how the three-day weekend will affect the team when they reach the field tonight.

"We had a holiday Monday," he said. "We had a few guys -- I kinda felt like we were behind, behind schedule a little bit, but these last two days I think we've caught back up. And I feel like our kids are ready to play. ... You feel like you're the only one, you know, that's behind, and you feel like you've got to catch up as a coach, you know. And that's the way all of us are I think."

The Red Devils will be short one player tonight after Toby Seymour was ejected last week, leaving him unavailable for tonight.

"We lost one -- we got one ejected, so he won't play this week," Counce said. "And that's gonna hurt us, but everybody else seems to be healthy and ready to go this week. We've tried to do a few things kind of new on offense -- throw a few wrinkles at them, try to get them in a bad position on the corner and stuff, but overall, you know, weeks like this is really about us, when we don't have information on the other team."

Kickoff at Stanley May Field is set for 7 p.m.