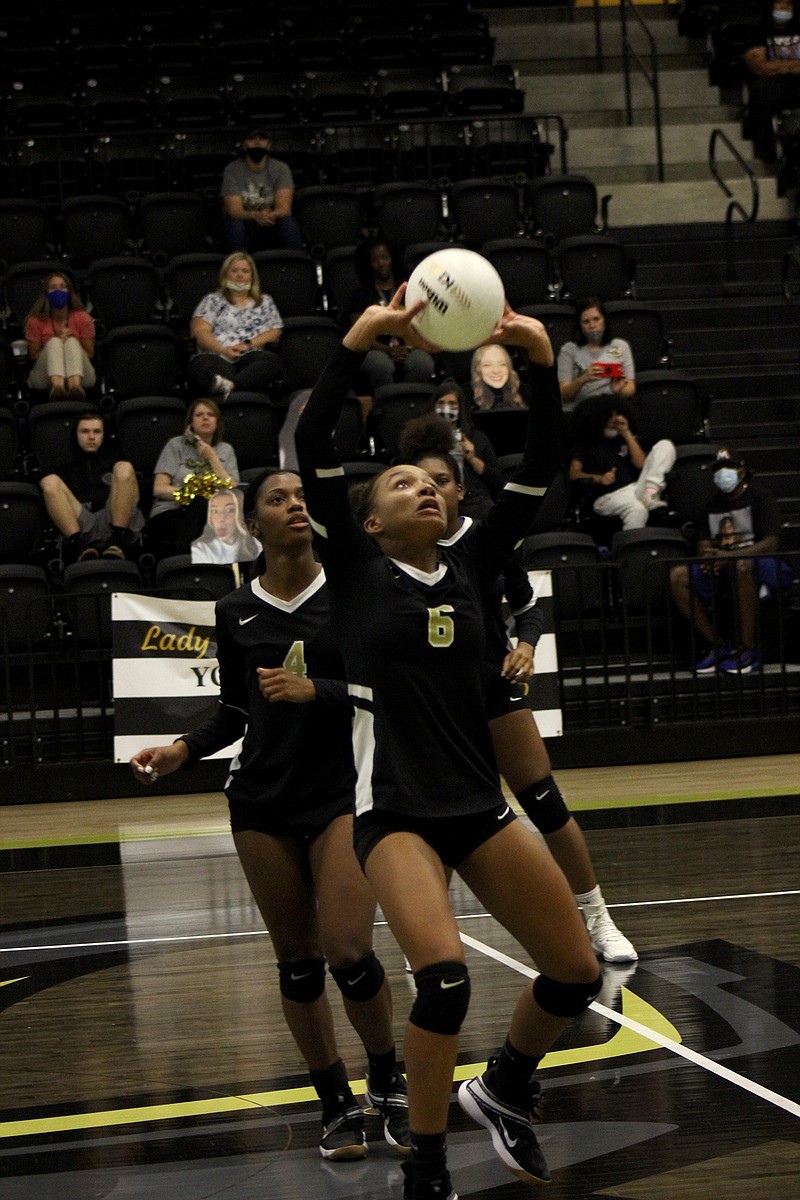 Hot Springs sophomore setter Bianca Thomas (6) sets the ball for a teammate during Thursday&#x2019;s win over El Dorado at Trojan Arena. - Photo by James Leigh of The Sentinel-Record

Hot Springs had the match in hand from the start.

As if trying to put an exclamation point on the match, Marlissa Archie opened the third set serving up 7 straight points to take a 7-0 lead. Archie ended the night with a game-high 15 service points and five aces.

"Well, she, against Hall, served 25 in a row," head coach Deana Franklin said. "It's the second time I've ever seen it in my career, and thank God I was on the winning end of it both times. But yeah, she's capable of that."

After losing the first two sets, El Dorado could not get a run going until its second time through the lineup. Trailing 23-10, the Lady Wildcats broke service and hit a small run to pull within 22-14.

Two serves later, the Lady Trojans celebrated their first conference victory of the season with a 25-15 win of the set.

"Our kids had an absolutely phenomenal practice (Wednesday), probably the best of the entire season, preseason included," Franklin said. "They really got the right mindset. Competitiveness was there; aggressiveness was there. Communication was there, and it carried over into moments tonight. We had a few -- a few highs and a few lows, and we've got to eliminate the length of those lows. It's a game of momentum. And you know, we've got to just eliminate those -- the length of those dips. But overall, very pleased. Very pleased."

The Lady Wildcats got off on the wrong foot as they could not string together points until late in the first set. Hot Springs led 23-6 before El Dorado cut the spread to 23-9 before eventually dropping the set 25-11.

"We brought the energy a little bit too late," said El Dorado head coach Derek Easter. "We kept digging ourselves a hole -- 6 and 7 point holes -- early in the sets, and then we had to basically fight uphill. Just like I've told them in the past, it takes a lot of energy to climb out of those holes. They showed energy great at the end of the set, but we have to be better earlier in the sets and bring the fight earlier, so we don't, we don't fall into those holes."

The visiting team had some better luck with stringing together points in the second set, despite falling behind 6-0 with 5 straight from Archie after the Lady Trojans broke service. El Dorado put up 2 points before Lady Trojans junior Anasztazia Anderson put up a five-serve run to take a 12-2 lead.

The Lady Wildcats managed to cut into the spread somewhat, cutting a 15-3 deficit to 16-6 then 18-9, but another short run by Anderson set up game point. El Dorado broke service to pull within 24-16 before failing to convert a point, leading to the loss.

One of the keys to the win was the smart play by sophomore setter Bianca Thomas. Thomas finished with 15 assists, 11 service points, four aces, eight digs, three kills and a block.

"She's got phenomenal hands," Franklin said. "When I saw her hands, I went, 'You're setting all the way around.' This is the first time -- I think in my career -- that I've run a 5-1 offense. I've always run a 6-2 offense, but her hands are so beautiful. I couldn't not set her."

Junior Ashley Baier led the team with 11 kills along with eight digs and an assist, and senior Anecia Owens added five kills and two digs. Archie led the back row with 14 digs, four kills and two assists, and classmate Bella Timm had nine digs. Anderson tallied 12 service points with one ace in the match.

• Hot Springs also won the junior varsity match in straight sets. The team took a 25-18 win in the first set before taking a 25-11 win in the second.