WATCH: Virus situation looks brighter, but not time to relax 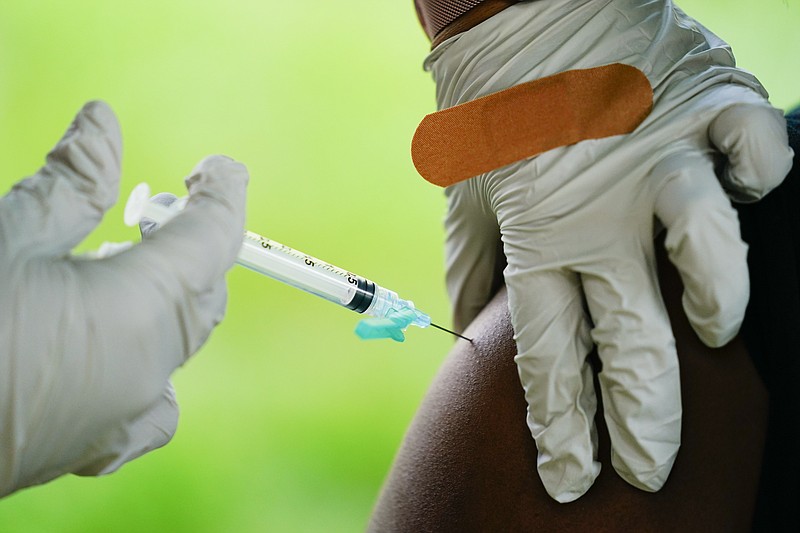 In this Sept. 14 file photo, a health worker administers a dose of a Pfizer COVID-19 vaccine during a vaccination clinic at the Reading Area Community College in Reading, Pa. - Photo by The Associated Press

While local COVID-19 case numbers continue to drop and school districts prepare to revisit their respective mask policies in the coming week's school board meetings, Garland County Health Officer Dr. Gene Shelby says the time to relax has not come just yet.

Shelby said Thursday the pandemic is currently looking a little brighter, noting that comparing this year's numbers and trends with last year's provides a glimpse of what could come later this fall and winter.

"I think, overall, our numbers indicate that things are getting better," he said. "Our average number of daily cases for the previous week was down to 38 per day, which is a significant drop from just four weeks ago when we were at 88.3 new cases per day. So that's, I think, really a good indicator."

Shelby said the county's positivity rate has also dropped from 20.7% one month ago to 10.8% currently and that active case numbers are coming down.

"We've gone down from 593 to around 482, which is a drop of 111 active cases in a week's period," he said. "So I think those are all great trends. You know, back in mid-August, we were near 1,000 active cases and been down to 482 and we've dropped further this week. You know, unfortunately, our death rate continues to go up. We had increased during last week, which is also down a little bit. But I'd say overall, our numbers are good."

Shelby noted one aspect of the pandemic he has been keeping track of is the comparison of this year and last. While he admits last year's trends may not equate to this year's as the vaccine is now available, it can still provide some insight.

"I think one of the things that is different comparing this year to last year is that we do have the vaccine," he said. "But we do have a track record and I think the next four to six weeks are going to be real important to see if we're gonna be on the track that we had last year. Because last year, we were pretty level throughout September and October as far as our overall numbers and it wasn't until the middle to the end of October that we really started seeing the big increases that didn't actually peak until mid-January."

Shelby noted the numbers correlate with "the cooler temperatures and people being indoors more and then the big holidays with Thanksgiving and Christmas and New Year's. I think those were the main drivers behind our January peak of last year."

In comparing this year to last year, Shelby said one "bothersome factor" was that Garland County still has about three times the amount of active cases currently than it did this week one year ago.

"We're starting at a higher level and so we'll have to kind of see how things play out," he said, noting "vaccination is going to be the key and we've still got lots and lots of unvaccinated people in Garland County."

COVID numbers in the county's school districts are also going down compared to what they were. Shelby used the Lakeside School District as an example during Monday's Hot Springs/Garland County COVID-19 Task Force meeting.

"Not just the school but the whole community around Lakeside -- it is down," he said. "So they'll be looking at their mask mandate that they have instituted. And I think the consensus was at the meeting that we don't want to be dropping the mask mandate too soon until we see if we're going to have this big winter spike. I definitely think it's too early at this point.

"I think that it's good numbers but I would definitely prefer to see where we go and see if those numbers are going to continue to decline. I wouldn't trust, you know, that we've made enough progress until -- I would say mid to late October -- until we can see if in fact we're going to have another winter like we had last winter," he said.

As of Tuesday, the Jessieville School District had 24 active student cases and five staff cases, with 75 students quarantined. Jessieville, the only district in the county to not employ a mask mandate, recently revisited the topic at its school board meeting and decided to continue to strongly encourage the use of face masks rather than go with a mandate.

Shelby said the fully vaccinated percentage for people 12 and older in Garland County, as recorded by the Centers for Disease Control and Prevention, is up to 43% -- marking an increase of 2% from the previous week.

"And actually the country as a whole, their 12-and-above fully vaccinated percentage had just gone up 1%," he said. "It was at 63% and the total for Arkansas is now just past 50%, so, you know, we're making some good progress but we're still significantly behind Arkansas and the United States in terms of our fully vaccinated population.